What a Soldier Sees 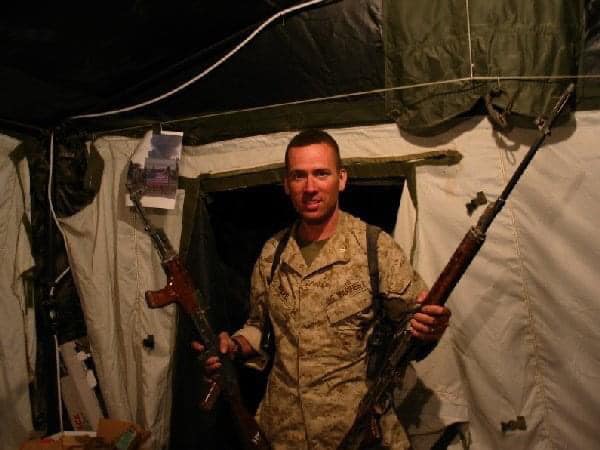 In honor of Veteran’s Day, Americans for Limited Government (ALG) thanks all our veterans for their service and dedication to defending our republic. The great men and women of our armed forces have never failed us. To quote Gen. Douglas MacArthur’s 1962 farewell address to the corps of cadets at West Point, “You are the leaven which binds together the entire fabric of our national system of defense. From your ranks come the great captains who hold the Nation’s destiny in their hands the moment the war tocsin sounds…For a century and a half you have defended, guarded and protected its hallowed traditions of liberty and freedom, of right and justice.”

We thank you for that.

One of those “great captains” MacArthur referred to, LtCol. Jonathan P. Myers, USMC (Ret.), sat down with ALG this week to share some of his experiences over his 28-year career as a military intelligence officer. LtCol. Myers wrote about his career highs and lows in his new book, American to the Corps.

American to the Corps presents a firsthand account of many of the most high-profile national security events of the last thirty years. LtCol. Myers found himself at the center of many of the most spectacular national security events of the last several decades, including the American response to the terrorist attacks in Benghazi; the rescue of Capt. Scott O’Grady from Bosnia; the investigation of the theft of classified information by Edward Snowden; the investigation of spy Robert Hanssen; the war against South American drug trafficking cartels; and the invasion of Iraq. The son of career CIA agents and hailing from an extended family of high-level intelligence operatives, Myers was at the epicenter of the action for three decades. His accounts provide a no-holds-barred, humorous, and sometimes emotional look behind the veil of secrecy of modern day national security, intelligence, and Marine Corps training and operations.

ALG:  You come from a long line of patriots. Tell me about that.

LtCol. Myers: My ancestors helped found the Jamestown Colony in 1609 and over the past two-and-a-half centuries they have been in the Army and Navy. Both of my grandfathers served in World War II, the Korea War, and in Vietnam War. As far as I know, I am the first to serve in the Marines.

ALG: What was your most recent assignment in the military before you retired?

LtCol. Myers: I was one of Gen. Mark Milley’s intelligence officers on the Joint Chiefs of Staff. Earlier in my career, I was the officer in charge of the planning effort to send in forces to reinforce the embassy in Benghazi and possibly the consulate branch plan after the attacks had already occurred. And that is discussed in my book in depth. And I think readers will find it very interesting that a lot of the issues that are encountered with the State Department prior to the attack I encountered again, trying to plan the response to go in and reinforce the embassy. In terms of Snowden. I led the investigation for the Marine Corps specifically, of what it was that Mr. Snowden stole from the Marine Corps, which was pretty extensive amount of data.

ALG: So what were the failures in Benghazi?

LtCol. Myers: The obstacles were the politicians and high level State Department people being involved. The Marines had planned a robust military operation that would have inserted Marines, fully tactical, prepared to reinforce the Embassy in Tripoli, as well as potentially reinforce the consulate after the attack. But in planning this mission to reinforce the embassy,  the State Department involvement really wasn’t helpful. They took the mission from a tactical one, in which we would have inserted fully armed Marines, to one in which we sent Marines in without weapons traveling on charter buses and commercial or charter flights. It was a travesty. It was pretty shameful, how that went down.

ALG: Did we learn any lessons from that to help us moving forward? I hope we did!

LtCol. Myers: Just look at Afghanistan. If there was a lesson learned, we would have executed it during the Afghanistan withdrawal. If that withdrawal showed anything, it showed that we didn’t learn any lessons. And it just got worse. The State Department made even more disastrous decisions in the execution of that mission.

ALG: From a military intelligence perspective, what are some of the big wins that we’ve had?

LtCol. Myers:  From my career, I was involved in planning the rescue mission of [downed Air Force pilot] Scott O’Grady in Bosnia in 1995.  The Marines executed that flawlessly. Anytime Marines can be left alone to conduct their planning process and execute their mission without too much nitpicking from above, they’re going to execute that flawlessly. In addition, anytime Marines get involved in any sort of humanitarian operation, they are the masters of executing that sort of mission. Any combat operation that the Marine Corps conducts, whether it was in Iraq or Afghanistan, they don’t lose Marines. We don’t lose in the battle. It’s the politicians and the State Department that ends up losing the war in the long run. Marines execute flawlessly.

ALG: Most recently, as a civilian, you have been involved in helping rescue Americans and our allies from Afghanistan. What is the latest there?

LtCol. Myers: I have been working with Pineapple Express. I coordinate with them daily. I lead a team of Marines. It was primarily three former Marines. We all knew each other. And it also happened that we knew a lot of the Marines on the ground in Kabul. So we serve as a conduit from the informal network of Marines worldwide who wanted to ensure that their interpreter or their ally, was noted and would be rescued. So they fed those names to us and we made sure that the Marines on the ground got them so that they could compile their list of people to rescue and yes, the mission continues to this day.

Right now, our biggest obstacle has been coordinating with the U.S. State Department to try to get approval to take people out. So what we end up doing is taking them to other countries that will accept them, even though they’re American allies. They work with American forces. We try to find other countries to get them to.

I had heard upwards of 70,000 were left there and I honestly don’t know that it will be possible to evacuate all of those people. I can tell you that my team has great success, but you know, we’re a small operation and we’re very targeted. So we’re getting people out. But the Taliban in the last week or two weeks actually has started to crack down on the process. They’ve outlawed transactions in US dollars, which they know will hurt organizations like mine because we’re using dollars to feed and house and move and provide medical to these people. And they’ve also done some other things in the country, which I can’t really get into for security purposes, but it’s not going to be as easy going forward it has been for the last few weeks.

ALG: How can Americans help in this ongoing rescue mission?

LtCol. Myers: They can contact me via my web page, which is Americantothecorps.com.  There is a contact form on there. Reach out to me and I’ll let you know how you can help.

ALG: What went so wrong in our Afghanistan withdrawal? Was it an intelligence failure?

LtCol. Myers: It’s the age old problem. If you ask any soldier or Marine you knew who served in Afghanistan on the ground working with the Afghan National Army, with interpreters and with special forces, they would give you a completely different assessment than if a colonel or general or politician told you on television in front of Congress. They would say that [Afghan] Special Forces allies were trusted; their interpreters were like a member of the unit, and the Afghan National Army was going to fold.  The process and the system is broken. And you know, it goes back decades and decades. We’ve all heard it before. What a soldier sees on the ground is different than what a general says in front of Congress and different than what a politician tells the American people.

ALG: Any final thoughts on honoring our veterans today?

LtCol. Myers: Please just thank a veteran. Tell them you appreciate them and are grateful for what they accomplished in Afghanistan. Many of them who served in that war feel demoralized as a result of how it ended. We need to tell them that they did not fail us. Others failed us, but they did not.

The post What a Soldier Sees appeared first on Daily Torch.

This post, What a Soldier Sees, was originally published on The Daily Torch and is republished here with permission. Please support their efforts.