Trump declassified a trove of Russiagate investigation documents on Jan. 19, 2021, the day before he left office—and the Justice Department is still hiding them 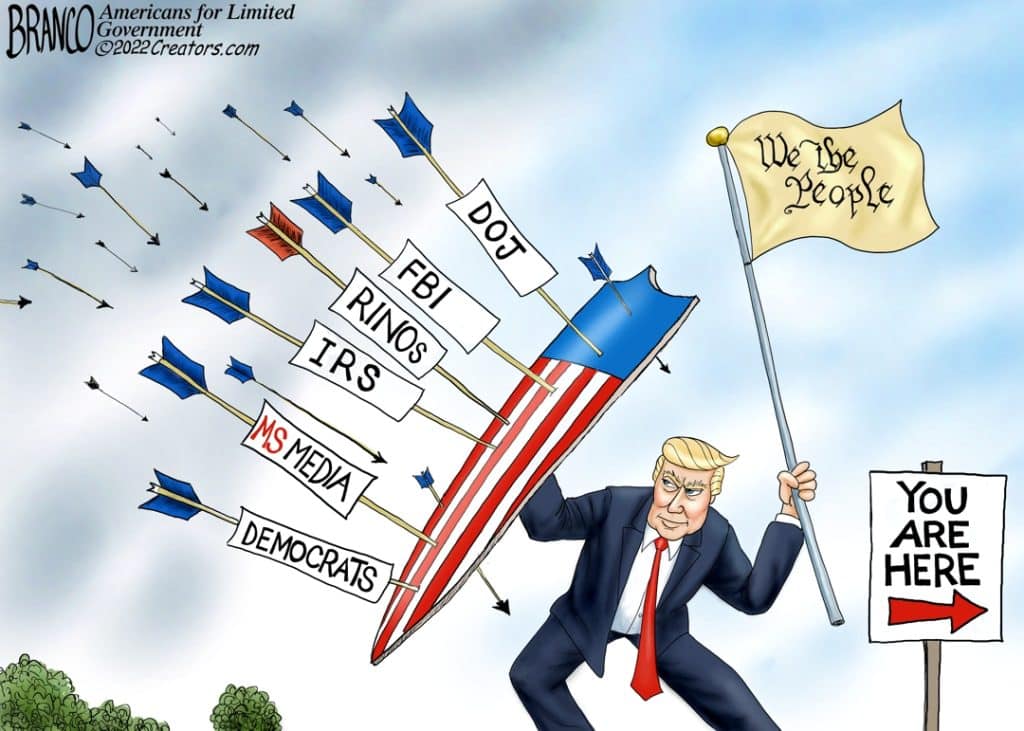 On Jan. 19, 2021, the day before he left office, former President Donald Trump declassified a trove of documents related to the Justice Department’s botched investigation of Trump that falsely accused him and his 2016 presidential campaign of being Russian agents.

These appear to be the same documents the FBI raided from Trump’s residence in Palm Beach, Fla., Mar-a-Lago. On Truth Social, on Aug. 12, Trump noted that “it was all declassified,” referring to the documents seized.

And the Biden Administration Justice Department led by Attorney General Merrick Garland never complied with the Trump memorandum, Senate Judiciary Committee Ranking Member Chuck Grassley (R-Iowa) and Sen. Ron Johnson (R-Wis.) revealed in a Feb. 15, 2022 letter to Garland. It was a follow-up to an Oct. 2021 letter on the same complaining about the lack of disclosure.

The memorandum, entitled, “Memorandum on Declassification of Certain Materials Related to the FBI’s Crossfire Hurricane Investigation,” Trump outlined how the materials were presented to him to be declassified: “At my request, on December 30, 2020, the Department of Justice provided the White House with a binder of materials related to the Federal Bureau of Investigation’s Crossfire Hurricane investigation.  Portions of the documents in the binder have remained classified and have not been released to the Congress or the public.  I requested the documents so that a declassification review could be performed and so I could determine to what extent materials in the binder should be released in unclassified form. I determined that the materials in that binder should be declassified to the maximum extent possible.”

But not before the FBI complained about the need for redactions, with Trump granting the redactions: “In response, and as part of the iterative process of the declassification review, under a cover letter dated January 17, 2021, the Federal Bureau of Investigation noted its continuing objection to any further declassification of the materials in the binder and also, on the basis of a review that included Intelligence Community equities, identified the passages that it believed it was most crucial to keep from public disclosure.  I have determined to accept the redactions proposed for continued classification by the FBI in that January 17 submission.”

The Trump memorandum continued, “I hereby declassify the remaining materials in the binder.  This is my final determination under the declassification review and I have directed the Attorney General to implement the redactions proposed in the FBI’s January 17 submission and return to the White House an appropriately redacted copy.”

However, that redacted copy was never returned to the White House as ordered. In May, former Trump administration official Kash Patel said he witnessed the declassification himself in a phone interview with Breitbart.com, but that the documents remained unaltered and had retained their classified markings: “The White House counsel failed to generate the paperwork to change the classification markings, but that doesn’t mean the information wasn’t declassified. I was there with President Trump when he said ‘We are declassifying this information.’”

Apparently, the Justice Department simply refused to comply with the declassification order, even with the redactions accepted by Trump, and so Trump was left with a decision. Leave it to Biden, or declassify everything and take them with him. Here, Patel appears to be saying that Trump simply decided to declassify the documents in toto and take his chances.

And now, the FBI has seized them back, with Trump, who appears to be running for President again in 2024, now subject to a criminal investigation by President Joe Biden who barely beat him in 2020, setting off perhaps the greatest constitutional crisis since the Civil War.

The years-long investigation began July 2016 following false allegations by Clinton campaign operatives that Trump had somehow supported a Russian plan to hack the Democratic National Committee (DNC) emails server and post them on Wikileaks, and then was carried the investigation over into the Trump administration in 2017, leading to the recusal of former Attorney General Jeff Sessions, the firing of former FBI Director James Comey and the appointment of former Special Counsel Robert Mueller, who found no such conspiracy.

During the course of the investigation, the Justice Department obtained surveillance against the Trump campaign and the GOP, first by targeting campaign foreign policy advisor George Papadopoulos via foreign agency efforts beginning in mid-2016, and then with Foreign Intelligence Surveillance Act (FISA) warrant applications on campaign foreign policy advisor Carter Page beginning in Oct. 2016, fueled by the DNC-Steele dossier falsely accusing President Donald Trump, Page and Paul Manafort of being Russian agents, that was renewed after the election and then finally the fateful strike on Michael Flynn in Jan. 2017, spying on his Dec. 2016 phone call with the Russian ambassador where Flynn attempted to deescalate tensions with Moscow, leaking it to the Washington Post on Jan. 12, 2017, sending the FBI to ask about it on Jan. 24, 2017 — all encompassing the bedrock of a three-year-long Justice Department investigation, undertaken under the mistaken belief that the nation had just elected the Manchurian Candidate.

It was an act of war. And, apparently, based on these documents the Justice Department refuses to disclose, we don’t even know the half of it. After 2020, Trump decided that he was not going to leave office lightly. He was going to take the truth with him. And as Kash Patel noted in the Breitbart.com interview, “he thought the American public should have the right to read themselves.”

The post Trump declassified a trove of Russiagate investigation documents on Jan. 19, 2021, the day before he left office—and the Justice Department is still hiding them appeared first on Daily Torch.

This post, Trump declassified a trove of Russiagate investigation documents on Jan. 19, 2021, the day before he left office—and the Justice Department is still hiding them, was originally published on The Daily Torch and is republished here with permission. Please support their efforts.