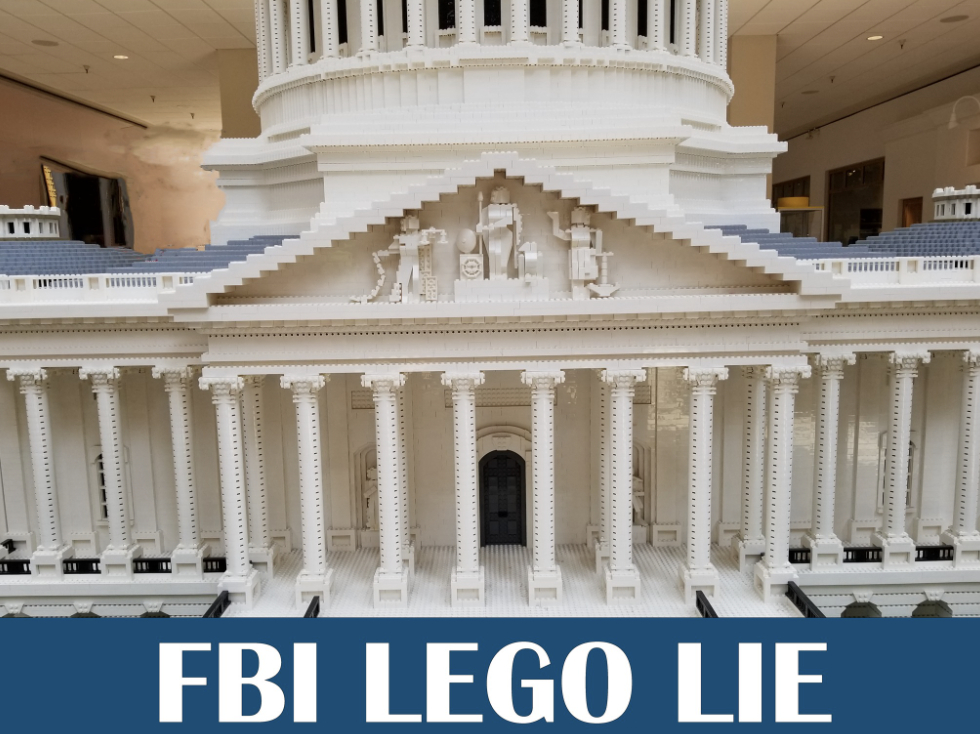 Nothing grieves me more than the self-immolation of federal law enforcement as they continue to prove themselves to be more political actors than law enforcers.

How do you know corruption has reached the bottom of a corporation or government agency?  When that corruption becomes so routine that the people in the middle and bottom of the organization are not constrained from lying, cheating or stealing because they believe that it is not only tolerated but condoned and rewarded.

The once venerable Federal Bureau of Investigation appears to have reached this loathsome state.

Headlines blared and pundits laughed about the person arrested by the Feds who had a “fully constructed U.S. Capitol Lego set” confiscated in a search of his home as evidence.  What a bunch of clowns, using Lego to plan an unarmed insurrection.

However, there was a problem.  There never was a fully constructed Lego Capitol, instead an unopened Lego box for building a Capitol was confiscated by the ever alert Feds.

As Britney Spears might say, if she were allowed, “oops, they did it again.”

The same FBI which housed, promoted, defended and later stonewalled investigations about the Russia Hoax, apparently is completely unconstrained from top to bottom, and is empowered to simply make up evidentiary claims.

Fear not, America. This is the same FBI that is prioritizing Trump supporters in their search for domestic terrorists, while its Clouseau-like Director, Christopher Wray, seems dangerously unaware of the coordinated damage and terror created by ANTIFA.  Believe it or not, Wray testified before the House of Representatives a mere three months ago, that he is unsure if ANTIFA is a nationwide network.

This testimony was five months after the election of 2020, and a November 3, 2020 article by Fox News reporting,

“A collection of groups led by Black Lives Matter and Shutdown DC reportedly has been holding training sessions for demonstrators to protest on Election Day — and apparently, they’re planning a large-scale event across the street from the White House expected to draw thousands.

“Several leaked documents and Zoom call recordings described a loose but coordinated network of activists seeking to mobilize around the country (emphasis added), especially if Democratic presidential nominee Joe Biden loses or if President Trump contests the election results. The materials purportedly showed plans to shut down federal buildings, including the White House, and to meet members of Congress at public transportation portals when they’re scheduled to reconvene in Washington after the election.”

For months before Election Day, ANTIFA terrorized cities across America, all sporting the same black gear and body armor, employing the same technique of using umbrellas to shield the identities of their front-line shock troops from overhead cameras, and using the same tactics of destruction and police intimidation in city after city.

But Wray is on the hunt for grandmas and grandpas who attended the January 6th Trump rally, even resorting to building a $6 million database of all of the evidence accumulated against the more than 550 people detained and possibly hundreds more.

To date, Wray’s FBI has employed hundreds of agents to break up the hardened geriatrics, many of whom wandered into the U.S. Capitol unmasked taking selfies in the Rotunda. To date, there have been zero charges of sedition or treason against anyone. There have not even been charges of carrying a firearm in the Capitol.

And it is the same FBI which, with all of their resources devoted to getting to the bottom of what happened on January 6th, seems completely disinterested in who allegedly set bombs at both the Republican and Democrat headquarters on January 5. The Capitol area in Washington, DC is the second most surveilled area in DC behind only the immediate area around the White House.  Cameras are everywhere.  Yet, we are supposed to believe that six months later, the FBI has nary a clue about the identity and whereabouts of the mysterious hoodie-wearing individual identified as a suspect?

It makes you wonder if the reports of bombs being planted were accurate or a narrative to drive the perception that the Trump supporters were violent, much as the death of Capitol Police Officer Brian Sicknick was blamed on a Trump supporter using a fire extinguisher, when everyone close to his death knew that was a lie.  Tragically, the coroner’s report determined that Officer Sicknick died of an unrelated stroke on January 7th, but his death was used for months to justify the violence claim by Democrats in control of Congress and later Biden’s Justice Department.

Nothing grieves me more than the self-immolation of federal law enforcement as they continue to prove themselves to be more political actors than law enforcers.

The Lego lie matters because the corruption which once was seen as limited to the highest ranks of the Justice Department and the FBI, now has metastasized throughout the organization. If they will lie about something so obvious, simple and meaningless as whether a Lego Capitol Building was constructed or in a box, can anyone trust anything they say?

The answer is clearly no.  And that is bad news for jurisprudence in America.

This post, TOWNHALL GUEST COLUMN: Why the FBI Lego Lie Matters, was originally published on The Daily Torch and is republished here with permission. Please support their efforts.