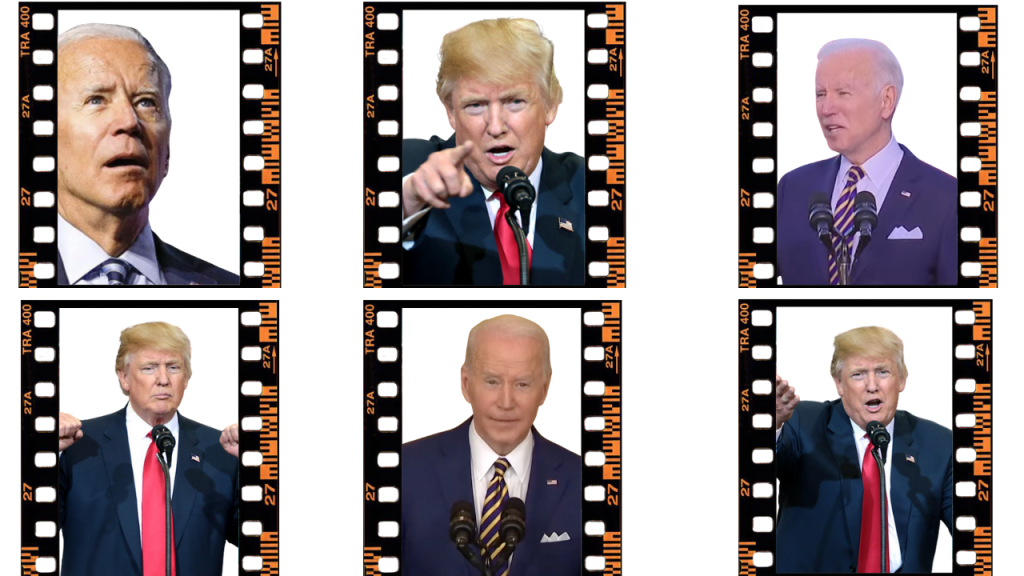 For a recent work assignment, I found myself searching YouTube videos and still photos of Presidents Joe Biden and Donald Trump and was struck by just how differently the camera captures each of them. I was reminded of an adage that I learned when I worked in broadcast news: the camera doesn’t lie.

I struggled to find a good image of Joe Biden. It was hard to find what news people call “an action shot,” a subject matter that is animated and interesting. For example, a speaker at the podium who uses their arms a lot is going to have a lot more action shots than someone who stands motionless.

In sharp contrast, I easily found action shots of Trump. In every video and still image, Trump looked engaged, energetic, and full of life. Trump always seems to be a man in motion. You couldn’t take a bad shot of him if you tried. This has nothing to do with the relative attractiveness of the two presidents. I personally find Biden to be better looking than Trump. But Biden is boring, where Trump is interesting.

In still shots and in video, Biden often appears lost, bored, lifeless, a shell of man.

Has Biden always been such a soulless figure, or is it a recent development related to age?

“When I listen to a speech by President Biden I am occasionally in agreement, often bored, rarely exhilarated and never inspired.

“Something central is missing from President Biden’s speeches, the same thing that is missing from the man. It’s gravitas—that dignity, seriousness and convincing solemnity that powerful public utterances carry. Mr. Biden simply doesn’t have gravitas in him. In his political career he has always seemed less a public servant than an operator, less a president than a backroom politician.

“One of Mr. Biden’s problems is that we don’t know what he truly believes. He ran for office as the great healer, the man who would bring the country back to the center after the stormy Trump years. Yet since he attained office, that Joe Biden has disappeared, and now often appears to be the spokesman for the Democratic Party’s divisive left wing.

Epstein’s observations remind me of the many Biden gaffes caught on hot mics. Who can forget how in 2010 he whispered into President Barrack Obama’s ear at the signing the ObamaCare legislation, “This is a big f*cking deal.” Or in 2019 when he exploded at an Iowa Democrat who challenged him with some impertinent questions.

“You’re a damn liar, man,” Biden sputtered. Or more recently when he called a Fox News reporter, a “stupid son of a b*tch.”

That is exactly how a mid-level political operative or “backroom politician” would talk. I should know, I’ve worked around enough of them.

Biden’s crude language reflects a man who is more comfortable working behind the scenes than a man adept at inspiring people in front of the camera. Up until his 2020 election bid, his third, Biden hadn’t won a single delegate. Not the record of a man who is a dynamic, inspiring leader.

In broadcasting we used to say a person either had talent or they didn’t. By talent, we meant a person jumped off the screen and connected with the viewer. It wasn’t about a person’s attractiveness so much as it was a certain energy that the camera picks up

This post, The camera doesn’t lie: it reveals Joe Biden’s lifeless shell, was originally published on The Daily Torch and is republished here with permission. Please support their efforts.