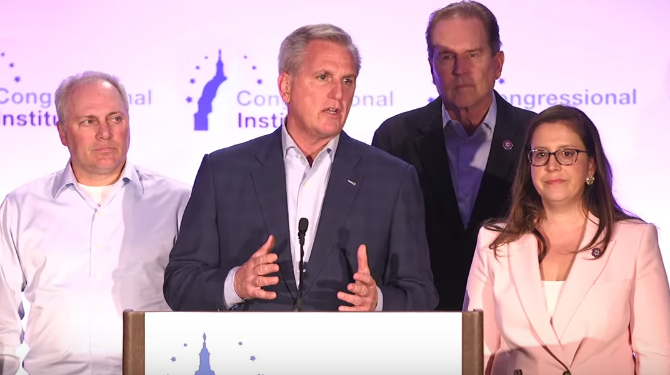 Don’t look now, but the race for Congress in 2022 appears to be tightening, judging by the generic Congressional ballot.

In the latest Emerson poll, which Republicans have led all year long, the GOP has just a 1-point edge now, 45 percent to 44 percent, amid a jump in enthusiasm among Democrats following the Supreme Court’s decision to overturn Roe v. Wade and return the question of abortion to states.

In the latest Quinnipiac poll, which the GOP has similarly led since Oct. 2021, Democrats are actually now ahead by 1 point, 45 to 44 percent.

Other polls still show Republicans leading, including Rasmussen, CNBC and New York Times-Siena, and so forth. The average of recent national polls by RealClearPolitics.com still shows the GOP leading by 2.5 percent, 44.9 percent to 42.4 percent.

And to be certain, this is a year that should favor Republicans. In midterm elections dating back to 1906 through 2018, the party that occupies the White House usually loses on average 31 seats in the House, and about three seats in the Senate. If that happens, Republicans should easily reclaim both the House and the Senate this year.

But are Republicans doing enough to maximize their advantage? Or were they hoping to just skate into power amid an imminent recession, crushing inflation and massive disapproval for President Joe Biden?

Certainly, House Minority Leader Kevin McCarthy (R-Calif.) said in a Fox News interview on March 24 that Republicans needed to present their agenda to the American people in order to win their votes, stating, “I believe in an election, you should tell the American public what would you do if you’re going to get the majority, and we’ve been culminating that.”

But voters would have to wait. At a press conference outlining the plan on March 23 at the House Republican Issues Conference at Ponte Vedra Beach, Fla. , McCarthy promised: “I believe by the end of the summer you’ll see the complete packages.”

So, maybe by September 21, when summer ends, you’ll find out what Republicans’ plan to govern in 2023. But they could probably start messaging before then.

A lot of action will have to be done via Congress’ power of the purse via funding bills: budget reconciliation bills, omnibus spending bills and continuing resolutions.

Congress could defund Environmental, Social and Governance investing in tax-free retirement plans under ERISA, and also via the federal employee retirement system, that is restricting capital investment in carbon based energy, calling for fertilizer bans and routinely violating civil rights law with racial and gender-based hiring quotas.

On Homeland Security, Republicans could provide more monies for finishing the wall on the southern border and institutionalizing the Remain in Mexico policy.

Congress could also regulate interstate and international commerce and break up the gridlock at our nation’s ports particularly in California to help alleviate the current supply crisis.

On labor shortages and declining fertility, Republicans could incentivize marriage and family formation via the tax code and lean a little bit more into the national debate post-Roe instead of hiding from it. Yes, abortion has been returned to the states, but the long-term impacts of declining fertility and fewer new families will likely need to be addressed via incentives to have more children. That can be done nationally.

Those are just a few items that could be discussed. 2022 should still be a very good year for Republicans, but they still have to earn the vote of the American people. McCarthy is right, if you don’t have a plan before the election, you won’t have a mandate to govern after the election. So, where’ the plan?

This post, Republicans cannot take 2022 for granted as Congressional generic ballot tightens, was originally published on The Daily Torch and is republished here with permission. Please support their efforts.