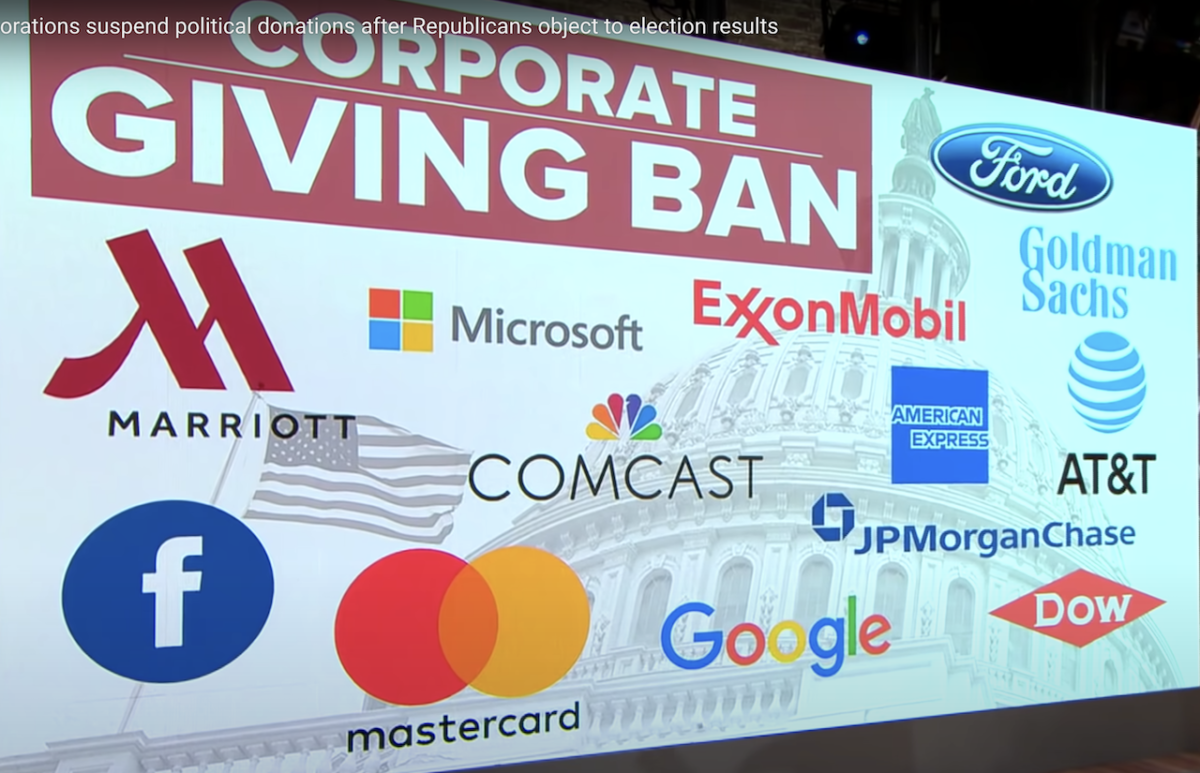 It’s been seven months since more than 15 major U.S.-based companies announced they would suspend giving money to members of Congress following Republican objections to the election results, despite taking no such action following the 2016 presidential election when Democrats similarly objected.

The Daily Caller News Foundation (DCNF) followed up on the disparate treatment and got zero response from the companies.  The companies refused to talk with DCNF about their political contribution activity following the 2016 presidential election.

The corporations quickly condemned Republican lawmakers who voted against certifying the 2020 presidential election earlier this year, but apparently didn’t criticize or punish Democrats who have similarly objected to election results in the past.

On Jan. 6, nearly 150 Republican lawmakers—eight senators and 139 representatives—objected to the 2020 presidential election results of at least one state, The New York Times reported. Pennsylvania and Arizona received the most amount of Grand Old Party objections while four other states received one objection apiece.

In the days following the electoral college vote, about 280 corporations announced they would either conduct a review of their political donation activity or no longer support those who had voted to decertify, according to a CNN database.

But according to a recent review by the Wall Street Journal,  more corporate PACs have resumed political donations to Republicans who objected to election results.

New campaign finance filings show political-action committees for Aflac Inc., American Airlines, Ford Motor Co. , General Motors Co. , Tyson Foods Inc. and United Parcel Service Inc. were among those that made recent donations to the campaigns of some of the 147 GOP lawmakers. The filings made Thursday to the Federal Election Commission cover the second quarter ended June 30.

Other companies and trade groups such as Boeing Co. , Lockheed Martin Corp. , Northrop Grumman Corp. , the National Association of Realtors, Cigna Corp. and JetBlue Airways Corp. also have resumed corporate PAC donations to GOP objectors. Some of the donations disclosed in House and Senate filings Thursday had previously been made public, including some by Ford’s PAC.

The latest filings also show Toyota Motor Corp.’s PAC gave more than $85,000 to more than four dozen GOP objectors before announcing a halt to such donations last week. The company, whose decision was earlier reported by the newsletter Popular Information, has said it made the decision after listening to its stakeholders who were troubled by the donations.

The companies whose PACs have resumed donating weren’t among those that had made specific pledges not to give to the group of GOP lawmakers. Those companies, which include Amazon.com Inc., Walmart Inc., AT&T Inc., Nike Inc. and Mastercard Inc., have so far not made donations directly to those campaigns, FEC filings show.

Below is a sampling of statements and actions taken by corporations showing they treated GOP objectors differently from Democrat objectors in 2020 and 2016.

“Last week’s attempts by some congressional members to subvert the presidential election results and disrupt the peaceful transition of power do not align with our … values; therefore, the [American Express political action committee] will not support them,” American Express CEO Stephen Squeri said in a statement.

An Amazon spokesperson said the company would discuss its policy with the members of Congress who objected, CNBC reported. Hallmark Cards even asked Sens. Josh Hawley, R-Mo., and Roger Marshall, R-Kan., who both voted in favor of certifying, to return the contributions it had given them.

“Following last week’s awful violence in [Washington, D.C.,] we are pausing all of our [political action committee] contributions for at least the current quarter, while we review our policies,” Facebook spokesperson Daniel Roberts said, according to CNN.

Although fewer Democrats voted to decertify than Republicans following the respective elections, the Democrats objected to the results of more states.

“The electors were not lawfully certified, especially given the confirmed and illegal activities engaged by the government of Russia,” McGovern, the House Rules Committee chair, said after objecting to Alabama’s results in 2017, CNN reported.

AT&T, Walmart, and Google were among the hundreds of companies to announce policy changes following the Jan. 6 riot.

This post, More Hypocrisy from Woke Corporate America, was originally published on The Daily Torch and is republished here with permission. Please support their efforts.