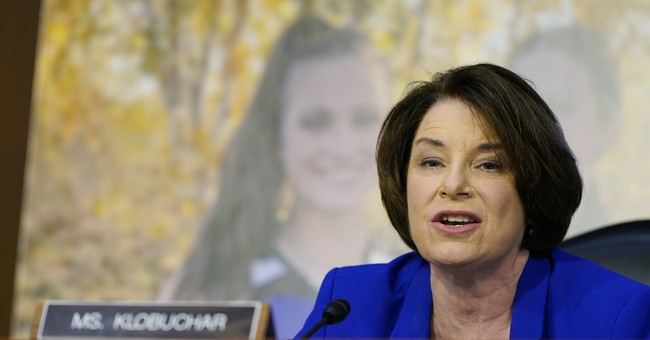 Klobuchar has now introduced her Senate version of the American Innovation and Choice Online Act. Instead of restricting Facebook from censoring you or accessing more of your data, the Klobuchar bill would actually give Facebook more access to your data through their apps on your phone.

Senator Amy Klobuchar (D-MN) is at least zero for two when it comes to legislation limiting the power of Big Tech.

After hearing from an extreme far-left Facebook whistleblower who is being funded by former eBay founder and current billionaire social engineer Pierre Omidyar, who wants more censorship of conservatives, Klobuchar responded in a clip played by Shannon Bond on National Public Radio saying, “I think the time has come for action, and I think you are the catalyst for that action.”

Bond followed the clip commenting, “And she and other lawmakers say, you know, they’ve been worried about Facebook and the way its algorithms exacerbate things like mental health problems, vaccine misinformation, ethnic violence for a long time. Now, here comes this ex-Facebook employee with tens of thousands of pages of internal research showing Facebook is also concerned about these problems. But, Haugen says, the company hasn’t done what it could to fix them because at the end of the day, it’s just so focused on growth. So, she says, Facebook is not going to change on its own, so Congress has to be the one to force it.”

This post, Manning in Townhall: Klobuchar’s Fake War on Big Tech, was originally published on The Daily Torch and is republished here with permission. Please support their efforts.