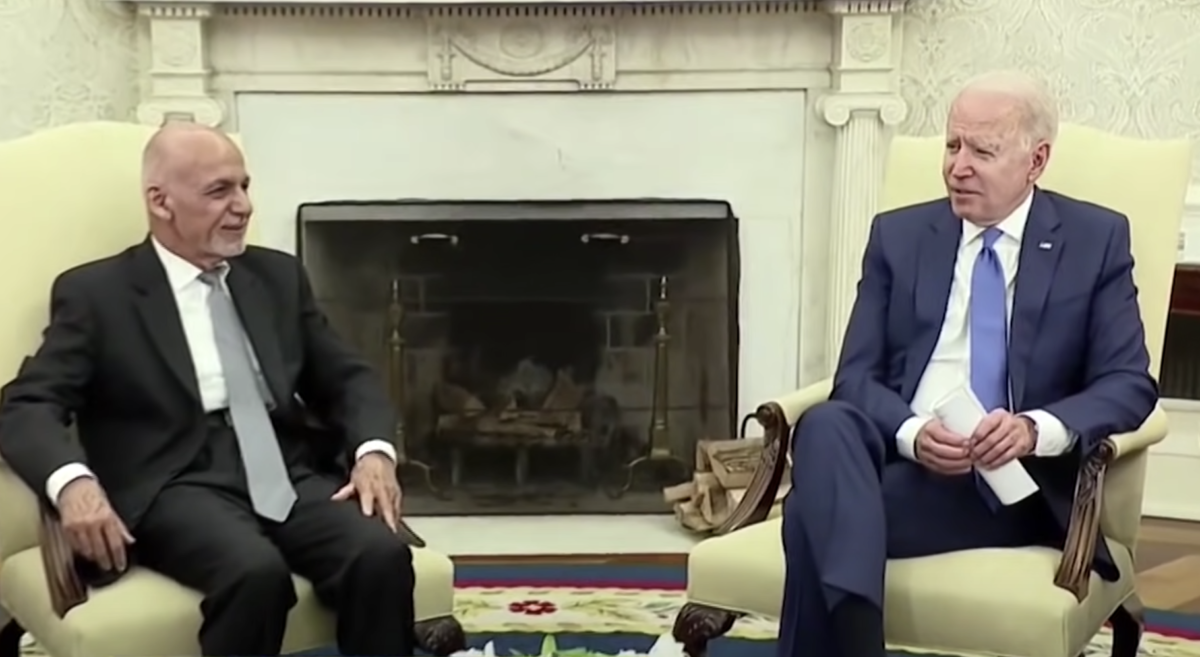 A transcript obtained by Reuters from an anonymous source reveals two leaders oblivious to the impending disaster and an American president focused on spinning the message.

In the last call between U.S. President Joe Biden and his Afghanistan counterpart before the Taliban seized control of the country, the leaders discussed military aid, political strategy and messaging tactics, but neither Biden nor Ashraf Ghani appeared aware of or prepared for the immediate danger of the entire country falling to insurgents. This according to a bombshell report from Reuters news service which reviewed a leaked transcript of the phone call.

According to Reuters, the men spoke for roughly 14 minutes on July 23. On August 15, Ghani fled the presidential palace, and the Taliban entered Kabul. Since then, tens of thousands of desperate Afghans have fled and 13 U.S. troops and scores of Afghan civilians were killed in a suicide bombing at the Kabul airport during the frenetic U.S. military evacuation.

According to Reuters, they reviewed a transcript of the presidential phone call and listened to the audio to authenticate the conversation. The materials were provided on condition of anonymity by a source who was not authorized to distribute it.

In the call, Biden offered aid if Ghani could publicly project he had a plan to control the spiraling situation in Afghanistan. “We will continue to provide close air support, if we know what the plan is,” Biden said.

In much of the call, Biden focused on what he called the Afghan government’s “perception” problem. “I need not tell you the perception around the world and in parts of Afghanistan, I believe, is that things are not going well in terms of the fight against the Taliban,” Biden said. “And there is a need, whether it is true or not, there is a need to project a different picture.”

Biden told Ghani that if Afghanistan’s prominent political figures were to give a press conference together, backing a new military strategy, “that will change perception, and that will change an awful lot I think.”

The American leader’s words indicated he didn’t anticipate the massive insurrection and collapse to come 23 days later. “We are going to continue to fight hard, diplomatically, politically, economically, to make sure your government not only survives, but is sustained and grows,” said Biden.

In a follow-up call later that day that did not include the US president, Biden’s National Security Advisor Jake Sullivan, General Mark Milley and U.S. Central Command commander General Frank McKenzie spoke to Ghani. Reuters also obtained a transcript of that call.

In this call, too, an area of focus was the global perception of events on the ground in Afghanistan.

According to Reuters, spokespeople for the White House and McKenzie declined to comment on the call. A spokesman for Milley did not respond by publication time.

Biden’s comments are troubling for several reasons. First, they reveal him to be a hack politician more focused on manipulating public opinion than on solving problems. Second, they show he was less than honest with the American people when asked about the situation on the ground in Afghanistan this summer.

‘The intelligence community did not say, back in June or July, that in fact this was going to collapse like it did,’ Biden told ABC News in August.

Biden said that he was not told that the Taliban would take over as quickly as they did. Instead, he said there was a possibility it would take more time.

Behind the scenes, however, Biden apparently knew that the situation was more precarious.

Sen. Lindsey Graham (R-SC) told Fox News this week that “Joe Biden is scaring the hell out of me.”

Graham told Fox and Friends, “Joe Biden is a dangerous man when it comes to our national security and our economic well-being. You really can’t believe a word he’s telling you.”

Biden claims the war is over.

“If the war is over, why are we still using drones to kill terrorists in Afghanistan? I can assure you the war between radical Islam and Afghanistan and the United States is not over.”

Biden has said he plans to use drones to attack our enemies in Afghanistan.

“But the drone program will not stop ISIS from growing in Afghanistan,” Graham said. “It did not work in Iraq or Syria. We’re very much expose to a 9-11 [attack].”

American Presidents must make hard decisions, and we’re inclined to support them when they do so overseas in the national interest. But President Biden’s defiant, accusatory defense on Tuesday of his Afghanistan withdrawal and its execution was so dishonest, and so lacking in self-reflection or accountability, that it was unworthy of the sacrifices Americans have made in that conflict.

The charitable interpretation is that this is what Mr. Biden really believes about Afghanistan in particular, war in general, and how to defend the U.S. The uncharitable view is that he and his advisers have decided that the only way out of this debacle is to lie about it, blame everyone else, and claim that defeat is really a victory. Neither one is reassuring about Mr. Biden’s character, his judgment, or—most ominously—the long three-and-a-half years left in his Presidency.

Americans for Limited Government President Richard Manning has called on President Biden to resign the presidency immediately. “Biden is not up to the job,” Manning said in an email to supporters. “His policies are failing.  He’s abandoning Americans in Afghanistan and doesn’t even appear to care.  Now American heroes are being killed because of him,” Manning concluded.

Tell Congress that Joe Biden must resign the Presidency immediately!

This post, LEAKED: Phone call between Biden & Afghan president reveals Biden focused on political spin, was originally published on The Daily Torch and is republished here with permission. Please support their efforts.