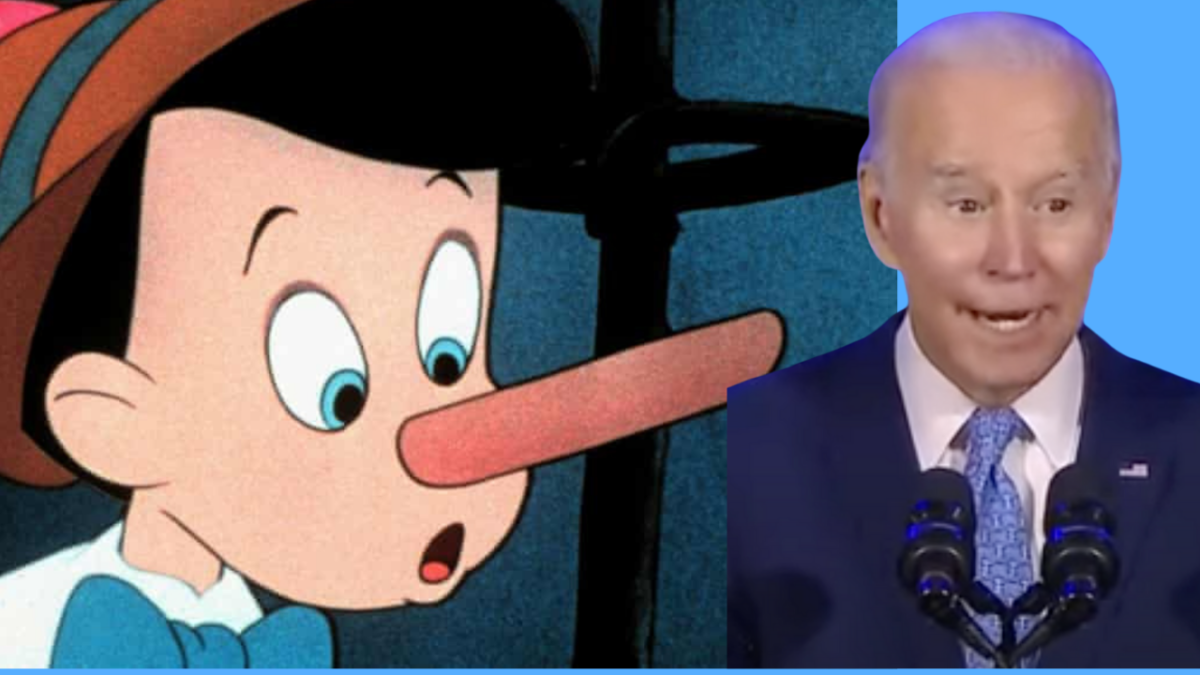 President Joe Biden has stumbled, mumbled, and bumbled his way through his first year in office. While many of his gaffes leave us laughing, much of what comes out of his mouth isn’t just nonsense, it’s outright lies.

President Joe Biden has stumbled, mumbled, and bumbled his way through his first year in office. While many of his gaffes leave us laughing, much of what comes out of his mouth isn’t just nonsense, it’s outright lies. Here’s a look at Biden’s Top 10 Lies of the past year.

Even the Washington Post called Biden out for this lie (after the paper repeatedly repeated it for months!)

Biden repeatedly condemned a new Georgia election law that imposed new restrictions on voting, but one of his complaints was simply false: “It ends voting hours early so working people can’t cast their vote after their shift is over.” Many listeners might assume he was talking about voting on Election Day. But Election Day hours were not changed. The law did make some changes to early voting. But experts say the net effect of the new early-voting rules was to expand the opportunities to vote for most Georgians, not limit them.

On the six month anniversary of the Jan. 6 Capitol breach, Biden said, “Not even during the Civil War did insurrectionists breach our Capitol, the citadel of our democracy. But six months ago today, insurrectionists did.

To call it an “insurrection” and the participants “insurrectionists” is a bald-faced. Not a single person involved has been convicted with insurrection, much less charged with it. Insider.com compiled a searchable database of the 727 people so far charged in the breach. Almost all of them have been charged with “Entering and remaining in a restricted building or grounds; disorderly and disruptive conduct in a restricted building or grounds; disorderly conduct in a Capitol building; parading, demonstrating, or picketing in a Capitol building.”

The Washington Post chose to use the euphemism “flights of fancy” to describe the numerous times in the past year that Biden said things that were utterly bizarre and inexplicable. We call them lies, but leave open the possibility that they reflect cognitive decline and he doesn’t know what he is actually saying.

During the year, we documented cases in which the president made puzzling statements for which there was no factual basis. He said that within 15 years, “every single” hospital bed would be filled with Alzheimer’s patients. Experts were stumped by this statement and our calculations show that in 2040 there would still be plenty of hospital beds even with the anticipated increase in patients with Alzheimer’s disease. Biden repeatedly said he has “traveled 17,000 miles with” Chinese leader Xi Jinping, a figure that could not be verified and made little sense. He said that the Second Amendment bars cannon ownership, which is flat wrong. He also falsely claimed that ending a minor tax break for racehorse owners would raise enough money — $9 billion — to cover free community college.

Before Biden caved to the reality that he lacked the votes in the Senate and backed down from the massive spending bill, he was trying to sell it as basically “free.”

Instead of wasting money on tax breaks, loopholes, and tax evasion for big corporations and the wealthy, we can make a once-in-a-generation investment in working America.

And it adds zero dollars to the national debt.

“This is completely false. The largest spending spree in government history will cost ‘zero dollars’? That defies logic and basic math. Alongside massive tax increases, it will add trillions to the debt. Peddling false narratives won’t change those facts.”

Just this week Biden told graduates of a historically Black college that when he was growing up in Delaware, he helped “desegregate restaurants and movie theaters” after attending services at a Black church.

Biden, 1987: “I was not an activist…I was not out marching. I was not down in Selma. I was not anywhere else.” pic.twitter.com/0aIPribvvH

Earlier this month at the National Christmas Tree Lighting ceremony, Biden made this false claim, “By working with business and labor, my administration has been able to handle the huge surge in goods moving through some of our biggest ports.  And that has translated into shelves across our country being well-stocked.”

But that flies in the face of reality. Here’s what a NEXT Insurance survey of small business owners found this week,  73% of retail small businesses are experiencing negative impacts to their business caused by supply chain issues, and more than a third of these retailers (35%) report significant negative impacts.

The holiday season, which is often a significant revenue driver for retailers, is proving to be even more challenging this year due to supply shortages and delays. And according to survey findings, just 16 percent of owners are very optimistic about an economic recovery.

Biden promised to “shut down the virus, not the country.” He failed. He promised to follow the science. He isn’t.

The Biden administration’s overt politicization of the science has gotten so bad, even The Atlantic and The Washington Post are calling them out.

Ignoring vaccine experts, touting flawed studies to support mask mandates on kindergarten students, overruling science advisory panels, and adopting language verbatim from far-left special interest groups … as The Atlantic put it: “With Biden in the White House, the CDC has promised to ‘follow the science’ in its COVID policies,” but its push of a faulty study about masks in schools seems “to show the opposite.”

Taxes on the middle class

Biden Lied when he tweeted that no one earning less than $400K would be hit with new taxes, “I give you my word as a Biden: If you make under $400,000 a year, I’ll never raise your taxes one cent. But, I’m going to make those at the top start to pay their share in taxes.”

In fact, under his plan, an average family who earns over $50,000 will see a tax increase. According to the non-partisan Joint Committee on Taxation, Biden’s plan will hike taxes on families making $50K or more a year.”

“No, I don’t think [vaccines] should be mandatory. I wouldn’t demand it be mandatory…”
Biden on December 4, 2020

Biden promised to get every American out of Afghanistan

President Biden on August 19: “If there’s American citizens left [on August 31], we’re gonna stay to get them all out.” https://t.co/2RtPVuhuDI pic.twitter.com/aEYfoUSpUy

Just this week, the Biden administration said it has evacuated nearly 500 U.S. citizens from Afghanistan since the U.S.’s chaotic withdrawal on Aug. 31 while fewer than a dozen U.S. citizens who want to leave are still stuck there.  The numbers, disclosed in a press release from the State Department, are drastically higher than the estimates President Biden gave regarding the number of Americans left behind in Afghanistan after U.S. forces left the country.

This post, Joe Biden’s Top 10 Lies of 2021, was originally published on The Daily Torch and is republished here with permission. Please support their efforts.