Jan. 6 political prisoners: Freedom of speech and thought under assault 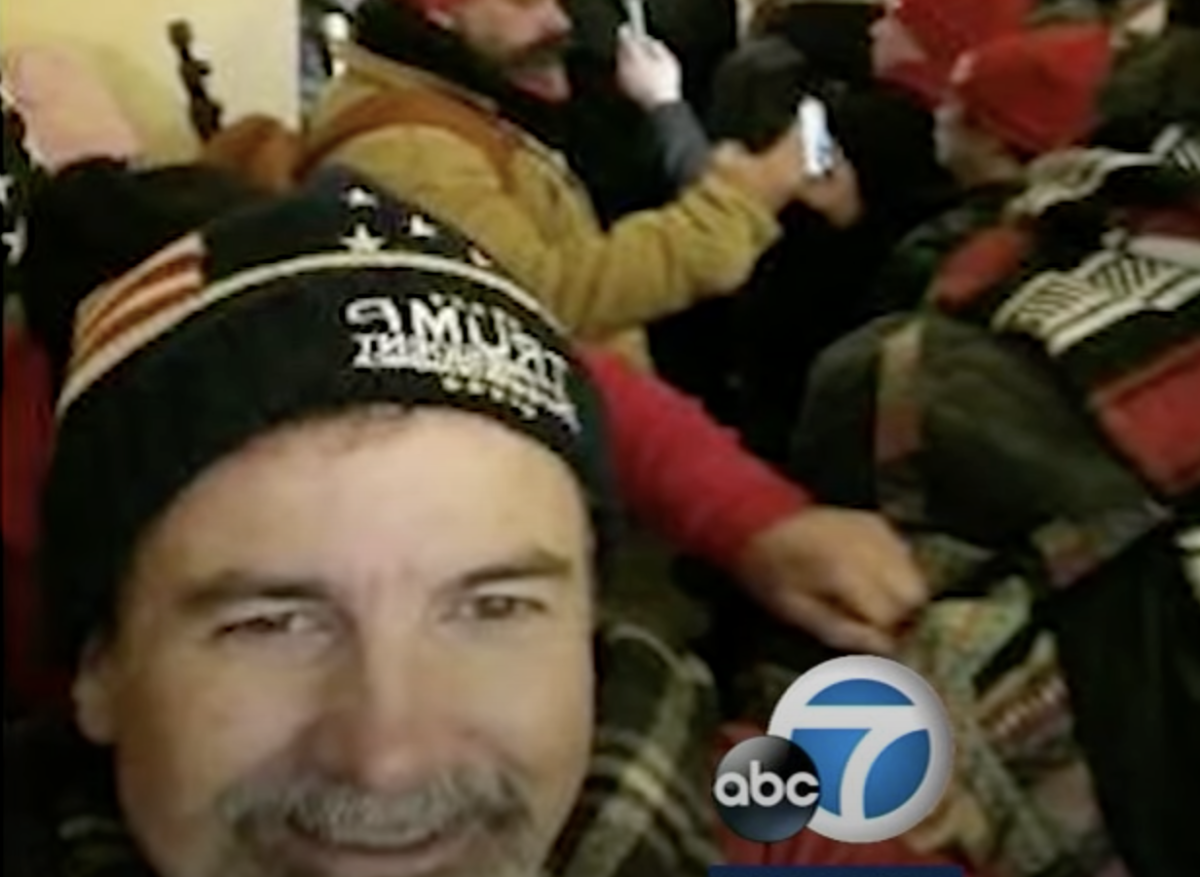 “They say they’re not, but [federal judges and prosecutors] are using their thoughts or things they’ve said against them to hold them in here, even when they’re here on peaceful charges. Whether they’re guilty or not, they’re not accused of any violence.” – Karl Dresch, recently sentenced Jan. 6 political prisoner

Selfie of Karl Dresch taken Jan. 6 in the U.S. Capitol

We are seeing a troubling trend with federal judges and prosecutors making statements to the effect that Jan. 6 political prisoners ought to be punished based on what they say and think as opposed to what they did. So far, none of the prisoners who have been sentenced have faced stiffer penalties based on this blatantly unconstitutional standard, but the fact it is even being considered is outrageous.

Consider the case of Karl Dresch of Michigan. According to columnist Byron York, Dresch came to Washington — his first time ever in the city — for the January 6 “Stop the Steal” rally. He listened to President Donald Trump’s speech and then joined a crowd heading down the Mall toward the Capitol. And when he got there, he…walked in through an open door. He wandered around for perhaps 20 or 25 minutes, and then left.

Prosecutors knew that Dresch, in the words of one Justice Department memo, “did not engage in physical violence or destruction of property, nor join others attempting to enter the U.S. Capitol in physical violence.” Yet the Department pushed to keep Dresch behind bars from the moment he was arrested and confined him to his cell 23 hours a day for more than six months as he awaited trial.

Early this month, Dresch and the Justice Department came to a plea deal. He pleaded guilty to one charge — Parading, Demonstrating, or Picketing in a Capitol Building. It was a misdemeanor carrying a maximum sentence of six months. Dresch was quickly sentenced to time served, fined $500, and set free.

Reading the Justice Department’s sentencing memorandum, prosecutors pointed to Dresch’s social media posts — among other things, he had posted that “We the people took back our house…now those traitors know who’s really in charge” — to argue that he verbally supported the violence, even though he did not participate in it. “Although [Dresch] did not engage in acts of physical violence or destruction, or remain in the U.S. Capitol for a lengthy time period,” prosecutors wrote, “his reaction to the events of the day and statements on social media show his support for the riot and his encouragement of the rioters through his own participation.”

The argument left Dresch baffled. “Sometimes it feels like the judges are just making up their own laws here to keep people in,” Dresch said in a  recent YouTube interview. “They say they’re not, but they’re using their thoughts or things they’ve said against them to hold them in here, even when they’re here on peaceful charges. Whether they’re guilty or not, they’re not accused of any violence.”

There seems little doubt that Dresch served more time in jail than others charged with similar offenses.

Demand Due Process for the Jan. 6 Political Prisoners!

CNN recently reported on the case of Boyd Camper who was set to plead guilty in the January 6 insurrection when the federal judge overseeing the case abruptly postponed the plea hearing over questions about whether Camper really believed he did anything wrong.

“Then this plea doesn’t go forward,” Judge Colleen Kollar-Kotelly said “If he… doesn’t think he did anything wrong, then there is no plea.”

It’s one example of the spectrum of contrition from the Capitol rioters. Some have offered emotional apologies and renounced the “big lie” about the 2020 election. Others remain defiant and see themselves as “political prisoners.” Some rioters, even while pleading guilty, pushed back when pressed by judges to take responsibility, leading to hiccups and delays at several recent hearings.

A lack of remorse could also have legal consequences. Defendants who plead guilty aren’t required to apologize, though it can persuade a judge to show leniency at sentencing. Federal prosecutors have said they’re looking for contrition from the insurrectionists, and they’ve already cited defiant comments from some rioters to argue in court that they deserve time behind bars.

Michael Zeldin, a former federal prosecutor told CNN, “It boils down to defendants saying that they learned a lesson from all this.”

That’s what Indiana grandmother Anna Morgan-Lloyd did. She told Judge Thomas Hogan she went through a political transformation after watching movies and reading books about racial inequality. She apologized for her “shameful” participation in a “savage display of violence.”

The judge gave her probation. But one day after sentencing, she went on Fox News and offered a very different perspective: She said she only entered the Capitol to protect an elderly woman, called the rioters “very polite,” and said police were “relaxed” and “didn’t tell anybody to leave.”

The about-face caught the eye of federal Judge Thomas Hogan, who cited Morgan-Lloyd while recently presiding over the plea hearing two other Jan. 6 political prisoners. Hogan said he was “concerned whether (we’re) getting true acceptance of responsibility” from rioters.

It is impossible for any judge to know what is in a person’s heart. But more importantly, it doesn’t matter. The Constitution is clear. A person can only be charged and convicted for what they do, not what they believe or (in most cases) say.

This post, Jan. 6 political prisoners: Freedom of speech and thought under assault, was originally published on The Daily Torch and is republished here with permission. Please support their efforts.

Coronaphobia made fear an idol and the unvaccinated heathens