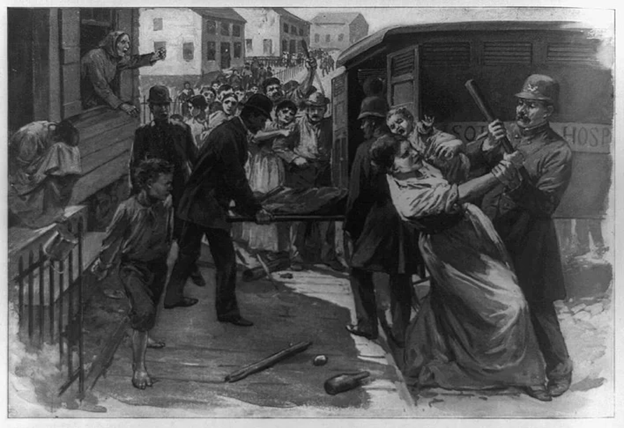 “I have been of this opinion, and I remain of that opinion, that I do believe at the local level, Jake, there should be more mandates. There really should be. We’re talking about life-and-death situation. We have lost 600,000 Americans already.”

That was Dr. Anthony Fauci, director of National Institute of Allergy and Infectious Diseases (NIAID), on July 11 with CNN’s Jake Tapper on “State of the Union,” urging governors, state legislatures, cities and counties to begin mandating residents to get the emergency use authorized Covid vaccines.

Fauci added, “There’s no reason not to get vaccinated. Why are we having red states and places in the South, that are very highly ideological in one way, not wanting to get vaccinations? Vaccinations have nothing to do with politics. It’s a public health issue.”

Here, Fauci and others are referring to a disparity between vaccination rates at the state and local level along partisan lines. The top 20 states with the highest vaccination rates all voted for President Joe Biden, ranging from Vermont at 67.7 percent to Wisconsin at 52 percent, and the bottom 23 states with the lowest vaccination rates, with the exceptions of Georgia and Arizona (although they both have Republican governors and legislatures), all voted for former President Donald Trump, ranging from South Dakota at 47 percent to Mississippi at 34.5 percent.

And so, there are certain constituencies that are more likely to get vaccinated, or wear masks, for that matter. A Kaiser Family Foundation (KFF) survey reports that 56 percent of Republican say they’ve already received the Covid vaccine or plan to do so “as soon as possible,” compared with 89 percent of Democrats and 67 percent of independents.

Beyond the partisan breakdown, blacks and Hispanics also report lower vaccination rates than whites, according to a KFF survey of 40 states: “the percent of White people who have received at least one COVID-19 vaccine dose (49%) was roughly 1.3 times higher than the rate for Black people (38%) and 1.1 times higher than the rate for Hispanic people (43%) as of August 2, 2021. White people had a higher vaccination rate compared to Hispanic people in all reporting states, except Missouri, Vermont, Tennessee, Louisiana, DC, and Virginia, and a higher rate than Black people in every reporting state, except Oregon, Alaska, Idaho, and Mississippi.”

Finally, older Americans are unsurprisingly far more likely—being the most vulnerable—to receive the vaccine.  For example, 25 to 39 year olds are only 51 percent vaccinated, while 89 percent of those 65 years old and older have been vaccinated, according to CDC data.

Overall, 192 million Americans have already received at least one dose of the vaccine, and 165 million are fully vaccinated, according to Centers for Disease Control. 70 percent of adults have had at least one vaccine shot.

Support for vaccine mandates also appears to correlate with views on the vaccine itself, according to the COVID States Project, with 64 percent of those polled favoring vaccine mandates nationally. But in states with higher vaccination rates, residents are even more likely to support vaccine mandates.

For example, in California, with an adult population of more than 30 million, 70 percent of residents support a vaccine mandate. But 30 percent don’t. So, if the state were to implement a mandate, it would be a situation of 21 million people coercing 9.2 million people to get a vaccine. That would certainly be a tyranny of the majority.

A federal mandate would almost certainly be unconstitutional. As reported by the Congressional Research Service’s Wen Shen in 2019, “Congress’s exercise of these authorities is also subject to certain external constraints. In the context of public health regulations, the key constraints are those grounded in federalism and the protection of individual rights. Pursuant to the principles of federalism, the Supreme Court has interpreted the Tenth Amendment to prevent the federal government from commandeering or requiring state officers to carry out federal directives. In the context of vaccination, this principle prevents Congress from requiring states or localities to pass mandatory vaccination laws…”

And yet local smallpox vaccine mandates were upheld by the Supreme Court in 1905 in Jacobson v. Massachusetts: “the legislature of Massachusetts required the inhabitants of a city or town to be vaccinated only when, in the opinion of the board of health, that was necessary for the public health or the public safety. The authority to determine for all what ought to be done in such an emergency must have been lodged somewhere or in some body; and surely it was appropriate for the legislature to refer that question, in the first instance, to a board of health composed of persons residing in the locality affected, and appointed, presumably, because of their fitness to determine such questions. To invest such a body with authority over such matters was not an unusual, nor an unreasonable or arbitrary, requirement… We are not prepared to hold that a minority, residing or remaining in any city or town where smallpox is prevalent, and enjoying the general protection afforded by an organized local government, may thus defy the will of its constituted authorities, acting in good faith for all, under the legislative sanction of the state.”

But the mandates of more than a century ago almost certainly deprived Americans of liberty without due process of law, unconstitutional under the Fifth and Fourteenth Amendments. Those provisions are a bright line of protection, not a grey area. The Supreme Court erred in 1905. A good question might be how they would rule today, but given the political pressure currently be waged, it seems a dim hope they would ever intervene except in a limited manner to uphold a religious exception to a state mandate.

As noted by smallpox historian Michael Willrich in May 2020, local government mandates that were used to eradicate smallpox initially were unregulated, heinous and arbitrary: “The smallpox vaccine had been around for more than a century by this time, but vaccines were mostly produced by unregulated commercial enterprises. The governments were compelling people to get vaccinated, but those same governments were not regulating vaccine production to ensure that vaccines were safe and effective. In the U.S., the vaccines on the market in the early 20th century were mixed in terms of quality and safety. Some of them were connected to tetanus outbreaks, such as in 1901 in Camden, New Jersey, when nine school children died of tetanus following a compulsory vaccination order. So there were concerns about vaccine hazards that were not negligible.”

Local governments also used door-to-door “virus squads,” Willrich noted: “Ultimately, compulsory vaccination was carried out in many communities in a way that was discriminatory against African Americans and immigrant groups. There were examples of compulsory vaccination being carried out with force in immigrant tenement districts in cities like Chicago, New York and Boston. Local governments created ‘virus squads,’ teams of police and vaccinators that cordoned off city blocks, entered neighborhoods in the middle of the night, and went door to door, checking people to see if they had vaccination scars proving they had recently been vaccinated. Police tore infected children from their mothers’ arms and took them to isolation hospitals called ‘pesthouses.’”

Can you imagine something like that happening today? It wouldn’t end well. Fortunately, states do not appear like they are about to go door to door sticking unwilling Americans with needles as they are bound as occurred more than a century ago with smallpox.

And so, whatever governments come up with will include things like travel restrictions without a vaccine “passport,” or to go to a restaurant, etc.

Also, given the state and local authority on this, the states more likely to implement vaccine mandates — blue states that voted Democratic — already have higher vaccination rates. States governed by Republicans are less likely to implement mandates. And so New York or California implementing vaccine mandates, for example, would not necessarily influence Florida and Texas to follow suit.

And it’s probably unnecessary, as data compiled by the Institutes for Health Metrics and Evaluation (IHME) shows the fatality rate of the virus has been steadily declining for more than a year.

And in Sept. 2021, IHME projects the mortality rate will arrive at 0.22 percent from the current upswing of cases, or 704 daily deaths from 310,065 total cases in mid-August, and 60,456 beds will be needed. But that would still be lower than April.

Dr. Fauci is right about one thing: This should have nothing to do with politics. So long as fatality rates continue falling, then what we’re already doing is working: a combination of vaccines plus natural herd immunity, breakthroughs in treatments, social distancing and other precautions, certain restrictions indoors, etc. — without any need to resort to coercive governmental vaccine mandates.

This post, Federal, state and local vaccine mandates are unfair, unconstitutional and unnecessary, was originally published on The Daily Torch and is republished here with permission. Please support their efforts.