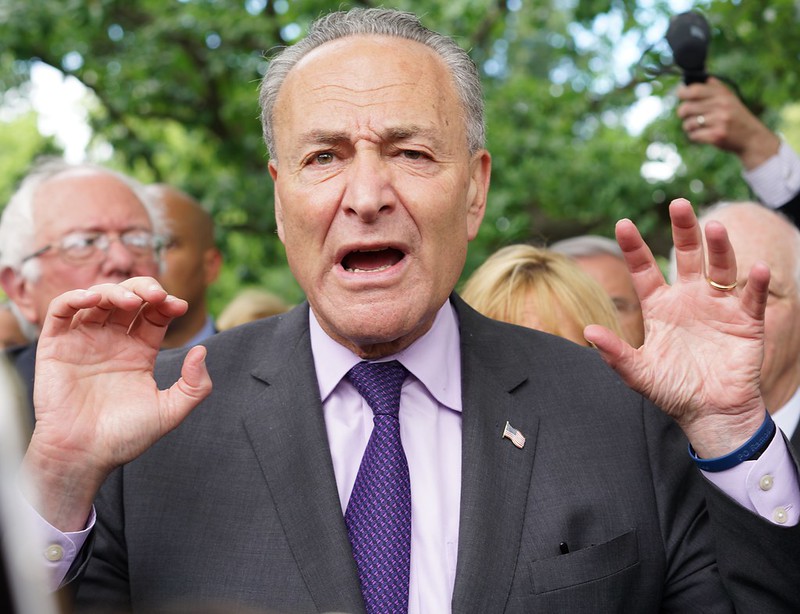 Ignore the faux outrage coming from Democrats and anti-Trumpers over J6. It’s meant to scare lawmakers into supporting a massive election ‘reform’ bill and deflect from the root causes of the Capitol breach.

As we approach the one-year anniversary of the Jan. 6 Capitol breach, Democrat leaders in Congress are ginning up hysteria in order to pass a bill that would transform our elections and give Democrats permanent majorities in all three branches of government. In addition, Democrats’ faux outrage deflects from the root causes of the breach which include four years of multiple attempts by Democrats to overturn the 2016 election results, loose election laws, and lax Capitol security.

But to pass their election rigging bill, Democrats first need to eliminate the Senate filibuster. That would allow them to pass the bill with only a simple majority of votes and not the 60 votes needed to overcome a presumed Republican filibuster.

Senate Majority Leader Mr. Schumer’s sent a  letter Monday to his Senate colleagues denouncing the 60-vote rule for most legislation (which he’s made use of throughout his career) and says the Senate will “consider changes to Senate rules on or before January 17” for legislation to “protect the foundation of our democracy.”

That would need support from Sens. Joe Manchin and Kyrsten Sinema, who have resisted so far.

To persuade them, Mr. Schumer wants to instill a sense of panic. “Much like the violent insurrectionists who stormed the US Capitol nearly one year ago” he writes, GOP states have enacted “anti-democratic legislation” that must be overridden by 50 Senate Democrats.

Indeed, those events are linked — but only because all Americans want (or ought to want) elections to be free, fair, and accurate. The people who rallied at the Capitol on Jan. 6 were angry because the 2020 election was NOT free, fair, or accurate. Some may blame voting machines, but the real culprit was the Democrats’ fraudulent bulk-mail ballot strategy. They didn’t need machine shenanigans when they could flood the zone with mail ballots that led to fraudulent ballots that would have been invalidated under pre-pandemic election rules by an election worker glancing at a signature.

In real time, a year ago, ALG made it clear that what those who breached the capitol did was wrong, it neither invalidates the complaint that the 2020 election was severely tainted, if not stolen nor the concerns about the four year effort by the Democrats to delegitimize the Trump presidency.

The Democrats’ election legislation would throw out numerous fairly and legally enacted state laws by commandeering the constitutionally prescribed election process and putting it under congressional control. Their aim is more Democrat votes whether authentic or not.

Democrats aim to limit voter ID requirements around the nation, even though voter ID has as much as 80% public support. It would be even higher if the media would report honestly about it. Democrats, however, argue that requiring voter ID hurts minorities, apparently because they think minorities are inherently less capable of procuring one.

According to a Wall Street Journal editorial on the ginned up hysteria:

[M]ost of the federal election legislation Democrats have proposed has nothing to do with Donald Trump’s attacks on the 2020 election result. The H.R.4 bill pushed last year, for example, would increase the power of the federal government to mandate racial gerrymandering. Another voting bill would require that mail ballots be accepted after Election Day.

Mr. Schumer’s cynical equivalence between Republicans who favor existing application of the Voting Rights Act and the Jan. 6 rioters is like comparing criminal-justice progressives to those who attacked police and property at Black Lives Matter protests last year. His aim is not to protect democracy but to blow up Senate rules for partisan gain.

House Minority Leader Kevin McCarthy acknowledged the one-year anniversary of the Jan. 6 attacks in a letter to his GOP colleagues on Sunday, accusing Democrats of using the events as a “partisan political weapon.”

“Unfortunately, one year later, the majority party seems no closer to answering the central question of how the Capitol was left so unprepared and what must be done to ensure it never happens again,” he added. “Instead, they are using it as a partisan political weapon to further divide our country.”

McCarthy added that Rep. Rodney Davis (R-Ill.), ranking member of the House Administration Committee, would be sending out a memo on steps congressional offices can made to protect the Capitol from future threats, “steps that the current majority party is negligent in acting upon.”

That is exactly where the focus on the Jan. 6 Capitol breach investigation ought to be: improving Capitol security protocols, while ensuring citizen access to their elected representatives. The Capitol police have already been given a massive infusion of new taxpayer money, now they need to come up with plans and procedures to prevent another breach.

In addition, Americans were forced to endure four years of attacks on President Trump’s legitimacy, which included two fraudulent impeachments. The simple fact that Democrats never accepted the legitimacy of the Trump election and spent four years trying to undo it explains why Trump supporters remain highly skeptical of the 2020 election results.

Today even fewer Trump supporters believe Joe Biden “won fair and square” compared to a year ago. Last year 13 percent believed that, today only 9 percent believe that. That’s according to a recent Yahoo News/YouGov poll.

In addition, that same poll shows a full three-quarters of Trump voters (75 percent) believe the election was “rigged and stolen,”— more than ever before.

The third area of focus must be on election integrity reforms at the state level. States such as Texas, Georgia, and Arizona area leading the way and we urge all state legislatures and governors to adopt similar measures to improve ballot security.

This post, Democrats Gin Up Jan. 6 Hysteria to Pass Election Rigging Bill, was originally published on The Daily Torch and is republished here with permission. Please support their efforts.