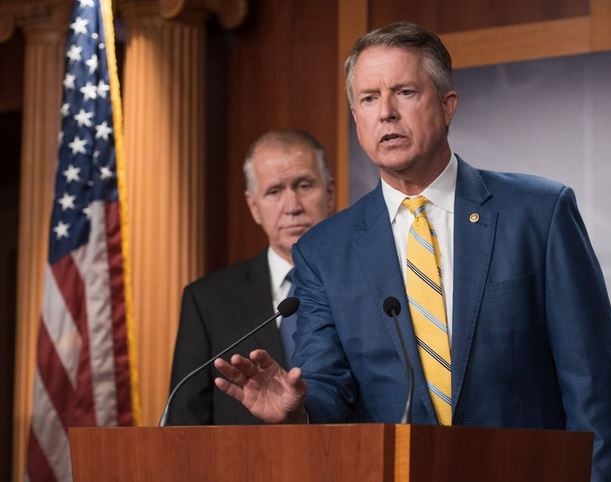 “President Biden is waging a cruel campaign to punish unvaccinated Americans—depriving them of their ability to provide for their families.” – Sen. Roger Marshall (R-Kans.)

But to ensure the Biden Administration does not try to revive and enforce the mandate in the future, U.S. Senator Roger Marshall, M.D. (R-Kan.)  is leading a Republican effort to defund all such efforts.  All 50 senate Republicans   supported Sen. Marshall’s amendment to the Continuing Resolution in September to prohibit funding for the promulgation or enforcement of the Biden Administration’s COVID vaccine mandate on private companies.

In addition, Marshall, and ten other senators sent a letter to Senate Majority Leader Chuck Schumer pledging to reject all spending packages unless the vaccine mandate is defunded.

“President Biden is waging a cruel campaign to punish unvaccinated Americans—depriving them of their ability to provide for their families. This is nothing short of immoral. There are so many humane ways to defeat this virus. Depriving law-abiding citizens of their livelihood must not be included among them.

“This punishment is not simply reserved for those who – for their own good reasons – decline to get the jab. President Biden’s mandate will punish everyone by crippling our nation. As companies and state and local governments begin to fall in line behind President Biden’s proclamation, issuing their own mandates to ensure their compliance, the societal consequences of these mandates are starting to manifest as examples of what is to come.

“These early examples demonstrate that coerced unemployment will destroy the machinery that allows our nation to function. Vaccine mandates threaten our law and order, national security, supply chains, travel, and every sector of our economy.

“To that end, please be advised (many weeks in advance of the current spending period, which ends on December 3, 2021) that we will not support—and will use all means at our disposal to oppose—legislation that funds or in any way enables the enforcement of President Biden’s employer vaccine mandate. Nor will we vote for or support cloture on any continuing resolution in the absence of language protecting Americans from this action…”

Sen. Mike Lee (R-Utah), a co-signer on that letter, took to the Senate floor this week to talk about the 12 bills he has introduced in recent months to protect Americans from Covid mandates, empower them with information about the vaccine, and hold the federal government accountable for how it spends COVID money. The Senate rejected all 12 of Lee’s measures.

“Some of these bills should have involved no controversy whatsoever,” Sen. Lee said. “Some just asserted good principles of lawmaking or constitutionalism generally or federalism. Yet each one was rejected, one right after the other after the other, repeated twelve times.

“Within the three branches we have these protections in place to make sure that no one person can exclusively exercise the power of the federal government,” Sen. Lee added. “The President of the United States under our constitutional system isn’t a king and may not rule by decree. He’s not free to just do things because he thinks they’re a good idea.

Sen. James Lankford (R-Okla.) has offered an amendment to the “must pass” National Defense Authorization Act (NDAA) that would protect all federal contractors and employees from Biden’s vaccine mandate. Americans for Limited Government President Richard Manning is asking every American to urge their senator to vote for Sen. Langford’s amendment.

“No one should be forced to choose between a medical procedure they don’t want and putting food on the table,” Manning said. “The vaccine should be a choice, not a mandate.”

This post, Conservative senators threaten to defund Biden’s vaccine mandates, was originally published on The Daily Torch and is republished here with permission. Please support their efforts.