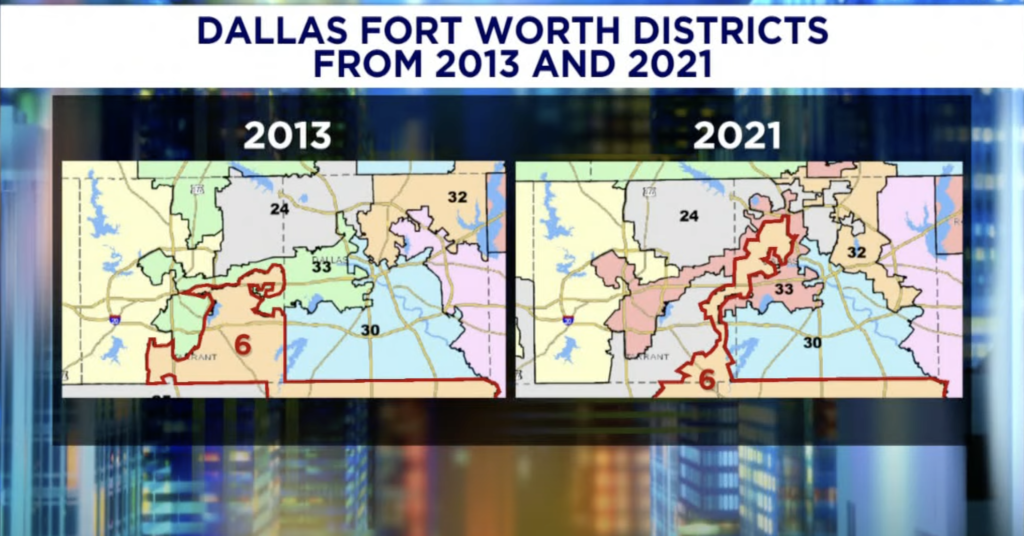 Under proposed map, Texas would go from 11 competitive House seats to just one. But DoJ is already suing to block the new map.

A new Wall Street Journal analysis finds the number of politically competitive House Districts has been cut in half in the 22 states that have completed their House maps. Currently those states have a combined 25 competitive districts, next election that drops to only 12.

The early figures signal that Republicans are likely to gain the most political power from redistricting. The number of districts with a strong Republican tilt has grown to 77, up from 64 in the current maps, the analysis finds. Districts considered safe terrain for Democratic candidates have grown from 59 to 61.

The Journal defined competitive districts as those in which the margin between President Biden and former President Donald Trump in the 2020 election was within 5 percentage points. Districts were considered safe territory for a party if its presidential candidate won by 15 points or more. The analysis excluded states with a single congressional district and included Georgia, where the House map hasn’t formally become law but is expected to do so.

“It’s really competitiveness that’s taking a whack this cycle,” said Michael Li, who is tracking the new maps as senior counsel at the Brennan Center for Justice, a policy research group. “There are just going to be a lot fewer competitive seats.”

Many analysts say that compromise in Congress becomes harder when House districts are dominated by one party, as the winner of that party’s primary contest usually goes on to win the seat. This can push candidates to appeal to their party’s most ideologically driven supporters, rather than focusing on the larger and broader set of general-election voters. 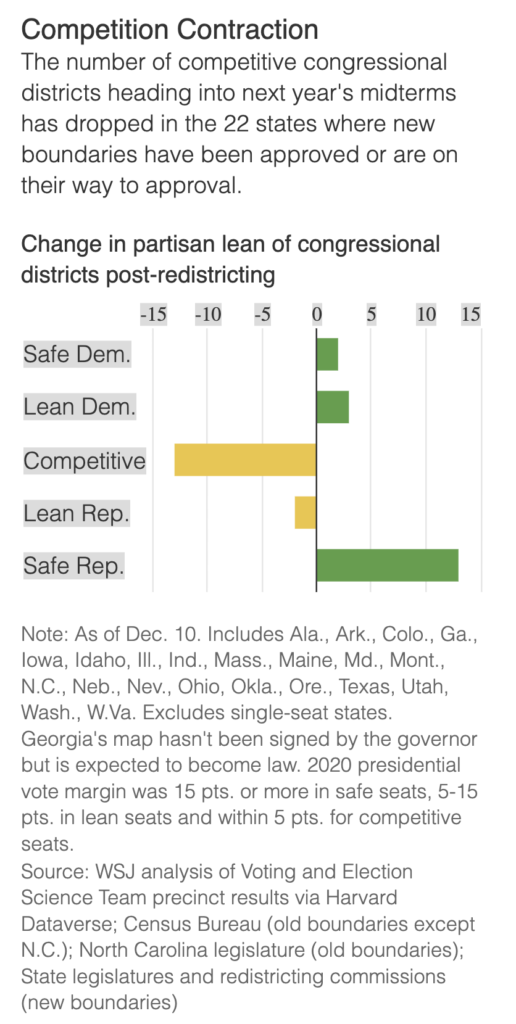 However, Americans for Limited Government President Richard Manning is skeptical that the maps currently being drawn will be the final maps used in next year’s mid-term elections. That’s because the Biden administration’s Department of Justice has already filed a suit against Texas’s proposed congressional map, claiming it “discriminates against minority voters, particularly Latinos.”

“The woke Biden Justice Department will sue every state whose new maps give Republicans even the slightest electoral advantage, while ignoring states like Illinois, California, and New York who will eliminate all Republican seats,” Manning said.  “It will ultimately be decided in federal courts, and the final result may look nothing like these initial maps being drawn up by legislatures.”

Hogan objected to the maps drawn by Democrat-majority Senate saying, “The congressional map drawn in back rooms by party bosses in Annapolis makes a mockery of our democracy, and it is an embarrassment to all that our state stands for. On behalf of all the people of Maryland who value fairness and integrity in our elections and in our political system, I am vetoing these disgracefully gerrymandered, illegal maps, which are a shameful violation of state and federal law.”

Hogan has called on the Department of Justice to file a lawsuit against his own state, claiming that its Democratic-controlled legislature violated the Voting Rights Act with its newly drawn congressional districts.

“On Monday, the U.S. Department of Justice announced that it is suing Texas over its new redistricting plan, alleging violations of the Voting Rights Act of 1965,” Hogan’s office said in a press release. “Today, Governor Hogan called on the Biden administration to immediately add the State of Maryland to that lawsuit.”

Manning said it would be unhealthy for our Republic if we eliminated all swing districts in the country and had only partisan representation. “That would result in a Congress that had zero incentive to work across the aisle to get anything done. It would be a perpetual stand-off that would result in a do-nothing Congress.”

Many lawmakers agree that competitive elections are good for voters and Congress.

“I think you get better representation when you have mixed districts, because congressmen and women make votes that are more consensus-constructed,” former Rep. Charlie Bass, a New Hampshire Republican told the Wall Street Journal. He has felt the heat of competitive general elections firsthand. Mr. Bass served seven terms over two stints in Congress, having won a seat, then lost it, then regained it and lost again.

The prospects of each party could shift once parties pick their candidates. Past redistricting cycles also decreased the number of competitive seats, and yet changing voter preferences helped produce wave elections that swept incumbents from office and changed party control of Congress in 2006, 2010 and 2018.

This post, Biden’s weaponized DoJ threatens potential Republican gains in new Congressional maps, was originally published on The Daily Torch and is republished here with permission. Please support their efforts.