Biden’s war on dissent is undemocratic and un-American 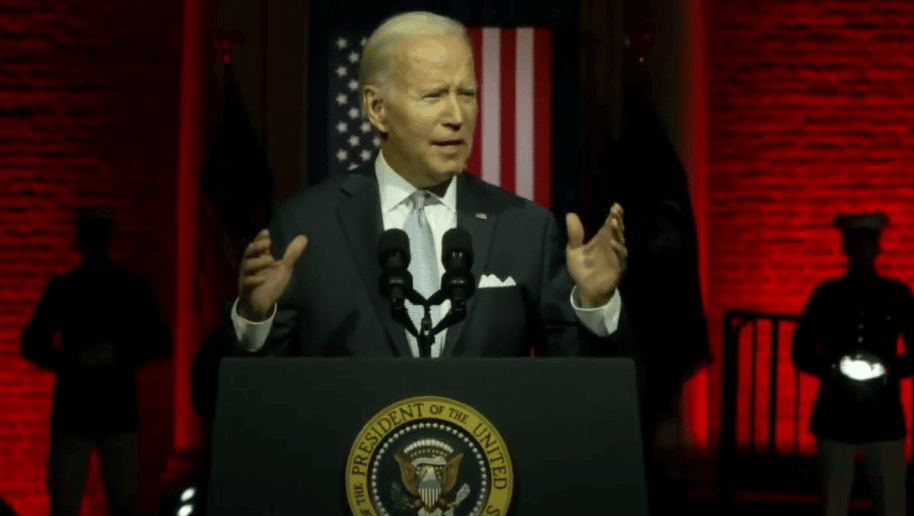 Joe Biden went to the holiest secular setting in America, Independence Hall where the Declaration of Independence was penned by Thomas Jefferson, and declared war on former President Donald Trump and those who support him. He did so in terms that serve as a full-speed ahead order for his weaponized Department of Justice to crush all dissent by those who disagree with his far-left policies and seek to defeat them in the 2022 elections.

Biden had the audacity to claim opposition to political violence, when it was his supporters who surrounded the White House when President Trump accepted the Republican Party nomination in 2022, attacking a U.S. Senator and his wife along with many others who attempted to leave 1600 Pennsylvania Avenue. I was in the group of people attempting to walk a block from the White House to my vehicle. I along with many, many others was instead put on a bus and shuttled to a ‘safe haven’ until 3 am when the Metropolitan Police deemed it safe to go to my car. The silence from candidate Biden was deafening.

When those same nihilists set fire to a church, breached the Secret Service perimeter to the White House three times, and defaced buildings all around D.C., Biden and his allies did not reprimand or express their outrage. They created Black Lives Matter Plaza a short walk from the White House to give a safe space for those who engaged in violence against those whom they disagreed.

Earlier when Biden was Vice President, candidate Donald Trump had to cancel a political rally in Chicago because the safety of attendees could not be guaranteed from attacks by extremists of the left. Joe Biden and his puppet master, a Chicago community organizer, President Barack Obama were silent.

When candidate Donald Trump spoke to the Republican Party of California in San Jose, he was not allowed to go through the front doors because it was unsafe and instead had to traverse through a dirt field and over a dirt barrier to enter through a back entrance. Again silence from the currently outraged Biden.

When violent anarchists of the left attacked the federal courthouse in Portland night after night in 2020, putting federal officers at risk, Biden was missing in action, and his running mate, Kamala Harris’ staff was donating to a group to pay for the release of those arrested in attacks against the state.

And when leftist thugs camped out at the private homes of Supreme Court Justices just a few months ago, it was Joe Biden’s Justice Department that refused to follow the law to protect those Justices against illegal intimidation. Fortunately, tragedy was averted when a psychopath who travelled across country to assassinate Justice Brett Kavanaugh turned himself in while standing outside the Justice’s home after midnight. If Biden urged calm and ordered his Justice Department to assist in protecting the Justices, I am unaware of it as it would have been at best a too little too late whisper.

So, President Biden, you have no legitimacy whatsoever when you decry political violence. Americans for Limited Government condemned the violence on January 6th in real time. We also condemned and experienced the violence of the left.

And if President Trump can be attacked by Biden supporters for language which they, without evidence, claim insighted January 6th, then certainly Joe Biden and his minions on the left should be held accountable for the violence they have fomented by their constant equating of Donald Trump’s policies that expanded freedom and wealth for all Americans with Hitler and Nazism.

The National Socialist Party in Germany unleashed brownshirts to terrorize and intimidate opponents of their regime. Tonight Joe Biden blew his dog whistle long and hard in the hopes of putting a moral justification for continued intimidation and violence against those who oppose his agenda in one of the most despicable moments in American history.

The walls of Independence Hall have been in the presence of greatness, men who put liberty above government and dedicated their lives and fortunes to create this great nation. Tonight, those walls heard the words of the demagogue, who waved a banner of democracy while denying the right to legitimate dissent for those who oppose his regime’s policies.

One thing he said was true however. The soul of America is at stake in November of 2022 and then again in November of 2024. While Biden called for assaulting those who disagree with his flawed big government vision, I call on every American to join together in voting to restore individual liberty, energy independence, and the right to protect your children from sexual abuse in the schools without fear of being targeted by the Federal Bureau of Investigation.

America does need to unite. Unite in favor of individual choices, not federal government mandates and around the idea that political violence is wrong, even when it is perpetrated by the left.

The post Biden’s war on dissent is undemocratic and un-American appeared first on Daily Torch.

This post, Biden’s war on dissent is undemocratic and un-American, was originally published on The Daily Torch and is republished here with permission. Please support their efforts.