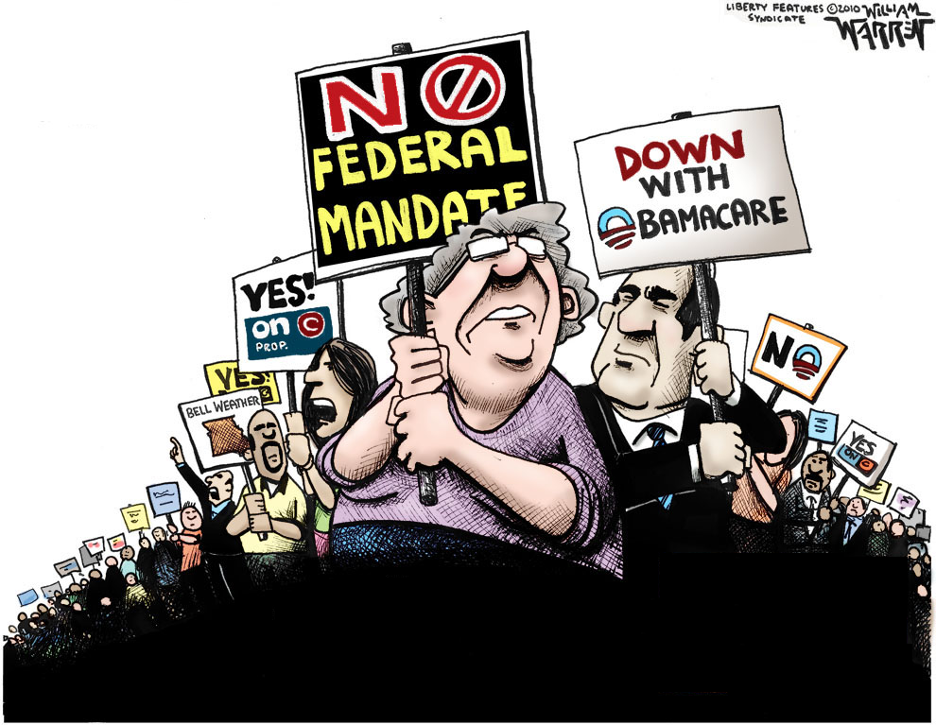 If the Biden vaccine mandates are upheld by federal courts including the Supreme Court, there will be no effective limit on the federal government’s police powers over personal health choices. There will be no turning back from the iron totalitarian grip upon liberty.

“Construing the Commerce Clause to permit Congress to regulate individuals precisely because they are doing nothing would open a new and potentially vast domain to congressional authority.”

That was Supreme Court Chief Justice John Roberts’ majority opinion ruling in 2012 that the individual mandate to purchase health insurance in the Affordable Care Act, or Obamacare, was unconstitutional under Congress’ Article I, Section 8 power to regulate interstate commerce.

And yet, the mandate was rescued in the very same decision by Roberts, ruling that penalty under the individual mandate was a valid exercise of Congress’ Article I, Section 8 power to collect taxes.

These very issues may be coming to fore once again in President Joe Biden’s Emergency Temporary Standard to be issued by the Department of Labor’s Occupational Safety and Health Administration (OSHA), which will compel employees at employers with 100 or more employees to receive a Covid vaccine.

And on the other hand, the Biden rule would impose a $14,000 penalty on employers per violation. If not under the Commerce Clause, could this imposition upon personal liberty be somehow justified as being a tax, just like the individual mandate?

That is the very real possibility the nation now faces, thanks to the Roberts ruling. If the $14,000 penalty is ruled to be a tax, it would provide a veneer for the federal government to regulate not just insurance mandates or even vaccines, but perhaps every aspect of our personal existence.

How much we eat.

How much sleep we get.

How much exercise we undertake.

If the Biden vaccine mandates are upheld by federal courts including the Supreme Court, there will be no effective limit on the federal government’s police powers over personal health choices. There will be no turning back from the iron totalitarian grip upon liberty.

Additionally, the OSH Act of 1970 states as a principal purpose of the legislation “authorizing the Secretary of Labor to set mandatory occupational safety and health standards applicable to businesses affecting interstate commerce…”

In other words, but for the Commerce Clause, there is no OSHA. It wouldn’t exist. Therefore, its ability to levy fines and penalties must also be derived from its Commerce Clause authority. And without a valid Commerce Clause justification — not getting a vaccine is not commerce — then Biden’s mandates cannot stand.

Another key difference that emerges is that Congress has never legislated a Covid vaccine mandate as a tax, whereas the individual mandate was an integral part of the Affordable Care Act. Instead, in this case, it created OSHA including the power to levy civil penalties under its powers to regulate interstate commerce.

Does anyone believe that Congress intended for a national vaccine mandate to be allowable under the law that created OSHA? This is the disquieting part of the Roberts ruling in 2012. Congress when it debated the individual mandate explicitly claimed it was not a tax. And yet the Roberts ruling effectively rewrote the law to say that it was.

Now, as states and others begin to sue against Biden’s vaccine mandates, the cases will eventually find their way to the Supreme Court within a year or two. In the meantime, about 80 million Americans’ jobs are on the line right now, and who could be facing irreparable harm if they refuse to get the shot, or if the new emergency rule is allowed to stand.

This is one where the Supreme Court will eventually be asked to rule whether the federal government can regulate every aspect of your life for the privilege of having a job.

If so, Covid cancel culture will be here to stay.

The post Biden’s vaccine mandate could rise or fall based on 2012 Roberts ruling on Obamacare individual mandate appeared first on Daily Torch.

This post, Biden’s vaccine mandate could rise or fall based on 2012 Roberts ruling on Obamacare individual mandate, was originally published on The Daily Torch and is republished here with permission. Please support their efforts.