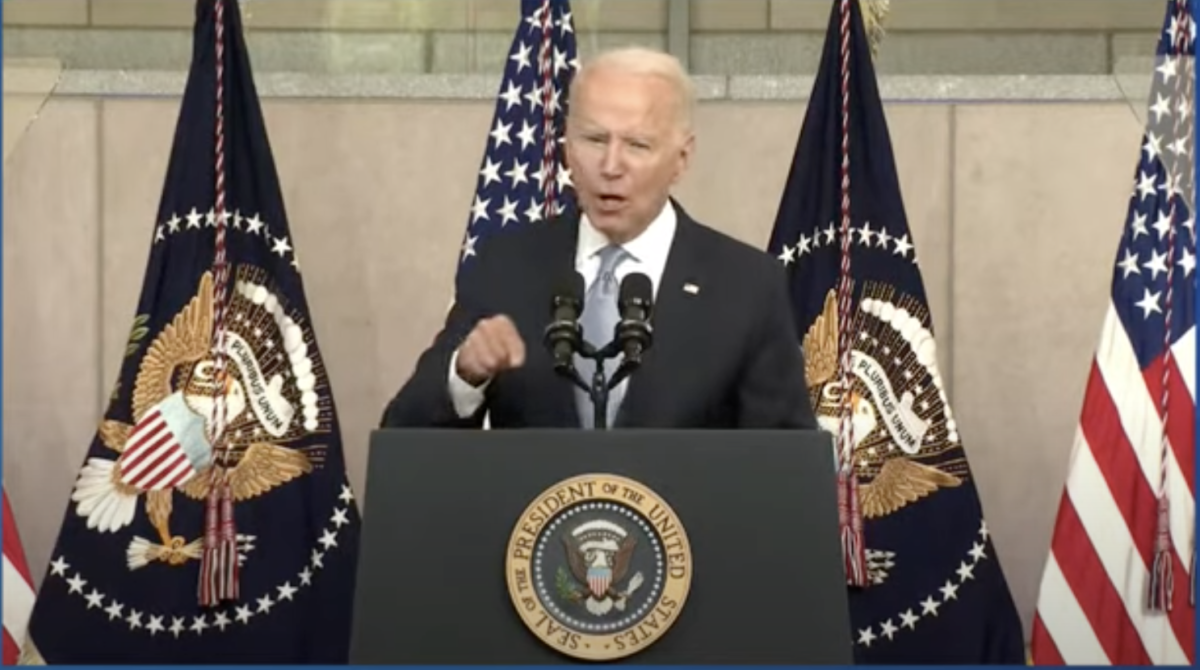 This speech is the ultimate Big Lie. And it is a dangerous one because it justifies the use of government resources to squelch political opponents.

President Joe Biden laid the intellectual groundwork for what appears to be a future all-out assault on his political opponents – anyone who supports voter integrity measures and opposes the Democrats’ vote-rigging bills in Congress.

In a rambling, at times inaudible, speech from Philadelphia, Biden claimed the Jan. 6 capitol rioters pose a greater threat to our nation that the Confederate forces of the Civil War, because at least they “didn’t breach the Capitol.”

Biden, continued to compare voter ID laws and other election integrity measures “poll taxes and the Ku Klux Klan campaigns of violence and terror that lasted into the fifties and sixties.”

Biden went on to claim that while attending the G-7 Summit in Great Britain last month other world leaders asked him “time and again, ‘is it going to be okay?’ Is the Citadel of Democracy in the world going to be okay?’” No, Joe. They weren’t asking if America is going to be okay. They were asking if you were okay? You embarrassed the nation with your geriatric performance in Britain, not knowing where or who you were half the time.

Biden went on to say that passing H.R.1, the Democrats’ vote-rigging bill that would ensure one-party rule in this country in perpetuity, is a “national imperative” needed to “end voter suppression, get dark money out of politics, give voice to the people at the grassroots level, create a fair district maps, and end partisan political gerrymandering.”

Biden then proceeded to lay out an intellectual framework for using the power of the federal government to shut down his political opposition.

“We also have to be clear-eyed about the obstruction we face. Legislation is one tool but not the only tool, and it’s not the only measure of our obligation to defend democracy today. For example, Attorney General Merrick Garland announced that the United States Department of Justice is going to be using its authorities to challenge the onslaught of state laws undermining voting rights in old and new ways.

“The focus will be on dismantling racially discriminating laws like Georgia’s vicious anti-voting laws. The Department of Justice will do so for the voting rights division that my request is doubling in size and enforcement status.”

Biden went on to denounce efforts to allow poll watchers from both political parties to observe ballot counting as an attempt by “partisan poll watchers to intimidate voters and poll workers.”

“They want voters to… wonder whose watching them and intimidating them, to wait longer to vote, to drive a hell of a long way to get to vote. They want to make it hard and inconvenient. They hope people don’t vote at all. That’s what this is about.”

And then he had to bring out the tired line about GOP voter integrity measures being “21st century Jim Crow laws.”

Biden went on to say that the government must act now to prevent voter suppression in the mid-term elections.

“No matter what, you can never stop the American people from voting. They will decide. The power must always be with the people,” Biden explained attempting to take up the mantle of populism. Biden is the very embodiment of government elite that the American people distrust.

Then he went on to use bombastic language more suited for a military campaign than a speech about voting rights.

“There’s an unfolding assault taking place in America today, an attempt to suppress and subvert the right to vote in fair and free elections, an assault on democracy, an assault on liberty, an assault on who we are, who we are as Americans. Make no mistake, bullies and merchants of fear, and peddlers of lies of threaten the foundation of our country.

“I never thought in my entire career I’d have to say it, but I swore an oath to god — an oath to you, to God to protect and preserve the Constitution and that’s an oath to forms a sacred trust to defend all Americans from threats both foreign and domestic.

“The assault on free and fair elections is just such a threat literally. We’re facing the most significant test of our democracy since the Civil War. This is not hyperbole. Since the Civil War. Confederates back then never breached the capitol as insurrectionists did on January the 6th. I’m not saying this to alarm you. I’m saying this because you should be alarmed.”

Don’t worry. We’re not alarmed by the misguided actions of unarmed people on Jan. 6. It was wrong what they did. But to claim it is worse than the actions of armed soldiers who declared war on their country is a lie.  And to hold hundreds of people who largely are charged with misdemeanor offenses for more than four months some in solitary confinement is a much greater threat to our nation, than anything done on January 6.

If Biden and the Democrats want to talk about The Big Lie, then let’s talk about this speech. This speech is the ultimate Big Lie. And it is a dangerous one because it justifies the use of government resources to squelch and attack political opponents.

Let’s hope that someday Americans don’t look back on this day as the time and place when the great divide began.

This post, Biden’s unhinged Big Lie, was originally published on The Daily Torch and is republished here with permission. Please support their efforts.