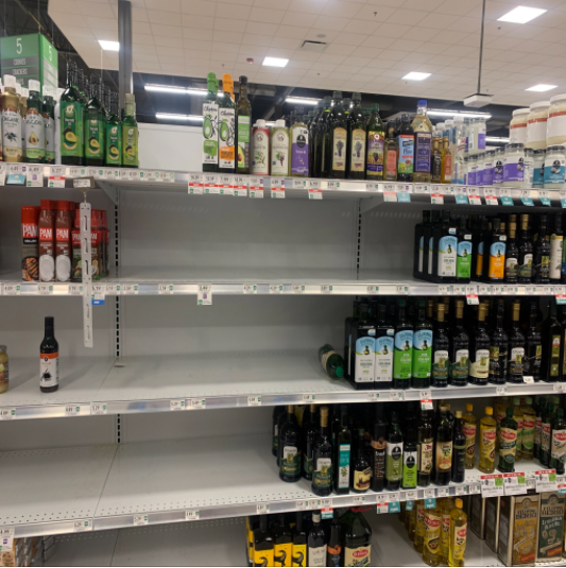 Biden’s rejection of the free markets and capitalism is the reason he is failing. The only question is whether Americans will be waiting in bread lines before they demand that this administration stop their war on reliable energy and allow truckers to do their jobs. 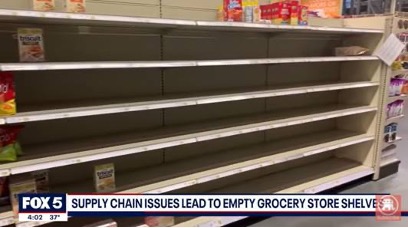 Inheriting an inflation rate of 1.4 percent from Donald Trump, Joe Biden has delivered in his one year in office price increases, not double or even triple but more than quadruple the rate he inherited.  As everyone who purchases virtually anything will attest, prices are higher, much higher – with an annual rate for 2021 of 7 percent.

And the situation is likely to get significantly worse as supply chain woes continue to afflict every aspect of our economy as American consumer dollars are going to be chasing fewer and fewer goods as store shelves are becoming more and more bare.

The Republican National Committee recently posted these photos of empty shelves across the country. 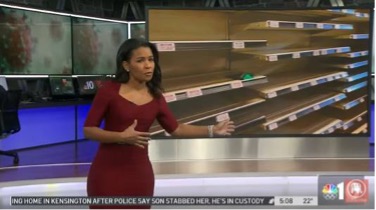 In Texas, there’s “near empty” shelves as residents have to go to as many as “3 different stores” to find products. 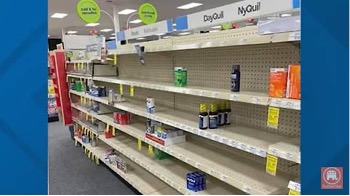 In Georgia, essential food products are in short supply. 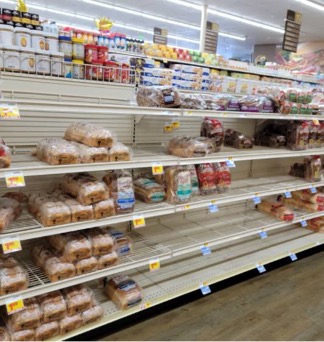 Since a picture speaks a thousand words, it is clear that for the first time since Nixon’s disastrous Wage and Price Controls, Americans are and will face empty shelves for the foreseeable future.

Remember that in 1989, Boris Yeltsin, who after the fall of the Soviet Union would become president of the Russian Federation, visited Johnson Space Center in Houston, Texas.  In a detour from his planned schedule, Yeltsin walked into a Randall’s Grocery Store expecting to see the same kind of privation that the Russian people faced daily under communism.  Instead he was greeted by an abundance that he couldn’t imagine, as the average American had more food and selection at their neighborhood grocer than Politburo members had in the then Soviet Union.

Today, after one year of Biden, if Russian President Vladimir Putin were to make the same journey, those same grocery stores would likely look very much like the one’s he was familiar with back home in Moscow.

The supply chain problem is complex, as multiple links in the chain are broken.  Most prominently is the fact that in spite of claims by the Biden administration, the Ports of Los Angeles and Long Beach, which handle 40 percent of our nation’s imports, are more congested than ever.

Freightwaves.com which covers container ship traffic reports that 110 container ships are waiting off the coast of California, an all-time high.  The trucking crisis in California caused by the state declaring war on independent truckers requiring them to scuttle any truck which is more than ten years old and not allowing anyone who is not part of a larger company to pick up a load in the state.

Biden Secretary of Transportation, Pete Buttigieg has sat on his hands during this crisis that is clearly within federal jurisdiction.  Rather than urging the repeal and seeking a federal government override of those specific laws as they relate to interstate transportation, the silent secretary points to the success of their port plan, which did nothing other than make ships wait further off-shore so they did not count in congestion counts.

But the California port logjam is not the sole push point on this crisis.  Farmers in places like Idaho, are worried that they cannot afford to take their potato crops to market due to the high cost of diesel fuel.  And in conversations with affected farmers, they fear that the problem will grow much worse in the next month if diesel prices remain at current levels and the bare shelves we see today, will become longer term as packaged frozen potatoes become unavailable due to the inability to get them from the farm to the processor.

Some dairy farmers are finding it difficult to get their milk to the packaging companies due to a lack of truckers willing to operate short runs at a loss due to fuel costs.

Of course, the White House will be shocked that when you declare war on the production of energy that works, like gasoline and diesel, driving the prices skyward, it has downstream impacts unimagined by green new dealers many of whom have no idea that food doesn’t just magically appear at the supermarket.

Unfortunately, Biden’s pro-Iran Middle East policy is also coming into play as Saudi Arabia has refused to pump more oil to lower prices at the president’s request.  Why are the refusing?  It is not greed, it is survival.  You see the Biden foreign policy geniuses have effectively given the go-ahead to the Iranian funded proxy wars that threaten the Saudis’ existence.  They have also denied the Saudis’ access to the missiles that make up their missile defense systems, putting them at the mercy of those who lob missiles at their oil production and population centers.

With the House of Saud no longer viewing the United States government as a reliable ally, is it any wonder why they scoffed at President Biden’s request that they raise oil production to make up for our nation’s loss of our energy independence in the past year?

How does this all fit into the current inflation picture?

Higher gasoline and fuel prices means higher costs to get products to market.  This inevitably results in shortages as food and other producers cannot afford to pay what it takes to get their products to market.  As Americans compete to buy those items, prices rise to balance the supply (limited) and demand (high).  When the artificial, government created, California port crisis is added into the mix, it is difficult to see a scenario where inflation doesn’t continue to jump.

If only someone in the Biden administration had taken a high school economics class, they would be able to diagnose the problem and do something about it.  Instead, they are steeped in the religion of climate change and according to spokeswoman Jen Psaki, “The president wants to make fundamental change in our economy, and he feels coming out of the pandemic is exactly the time to do that.”

Biden’s rejection of the free markets and capitalism is the reason he is failing. The only question is whether Americans will be waiting in bread lines before they demand that this administration stop their war on reliable energy and allow truckers to do their jobs.

If Joe Biden’s policies persist, we may just look back on the prices and empty shelves of January 2022 as the good ole days. I pray not.