Under Biden’s Build Back Better plan, the nation’s lowest wage earners can expect to pay 4 percent higher taxes than in 2021, while the top 0.1 percent of earners will see a 6 percent drop in their taxes.

President Joe Biden’s massive social welfare and climate change bill – his Build Back America plan – would raise taxes on the lower- and middle- classes, while giving lucrative breaks for the super wealthy. That’s according to a new study by the left-leaning Tax Policy Center, (TPC) a project of the Brookings Institution and the Urban Institute. The report offers an in-depth analysis of the tax increases that House Democrats want to see included in the multi-trillion-dollar legislation.

In addition, the Cato Institute’s director of tax policy studies, warned the Washington Times that the plethora of new taxes would complicate the tax code, making tax avoidance easier for the super wealthy.

The conservative Republican Study Committee in the House has also identified six provisions in the bill that either benefit the super wealthy or increase taxes on the middle class.

Republican Study Committee exposes tax hikes for middle-class and tax breaks for the wealthy in the Democrat’s spending bill:

Chris Edwards, director of tax policy studies at the Cato Institute said the plan includes spending increases of $1.85 trillion over 10 years, but that figure relies on “gimmicky accounting” and the actual cost would be higher.

Howard Glickman, a senior fellow at the Tax Policy Center, a project of the Brookings Institution and the Urban Institute, told the Washington Times, “Analyzing the House Democrats plan is especially complicated because the effective dates of its many tax provisions vary widely.”

Glickman wrote in the Tax Policy Center blog, “Taking into account all major tax provisions, roughly 20 percent to 30 percent of middle-income households would pay more in taxes in 2022. However, their tax increases would be very small. Among those with a tax increase, low- and middle-income households would pay an additional $100 or less on average. Those making $200,000-$500,000 would pay an average of about $230 more.”

The TPC’s chart below shows that in 2022, the nation’s lowest wage earners can expect to pay 4 percent higher taxes than in 2021, while the top 0.1 percent of earners will see a 6 percent drop in their taxes. 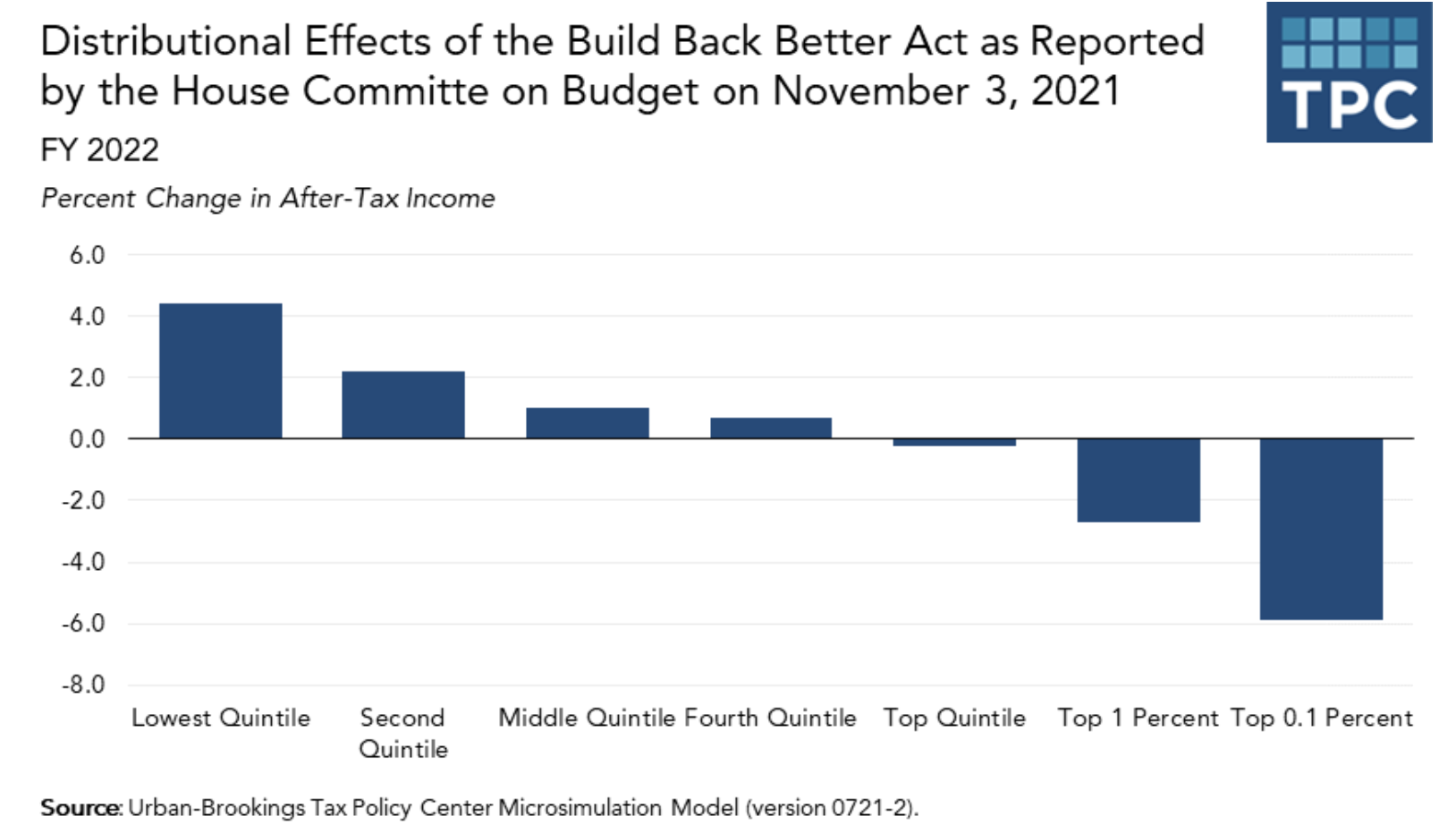 Americans for Limited Government President Richard Manning said the Democrat’s spending bill would vastly expand the size and scope of the federal government, in some cases taking over activities from state and local governments and the private sector.

“When the federal government steps in with a huge cash infusion, you can be certain there will be a lot of fraud, waste, and abuse,” Manning said. “In addition, this bill is full of budgetary gimmicks intended to lower the cost of the bill in the short term but will grow the federal debt over time.”

Please one-click email your Senators and Congressman and tell them to oppose the not-subject-to filibuster multi-trillion-dollar Bernie Sanders spending bill.

This post, Biden’s Build Back Better Plan Full of Middle-Class Tax Hikes, was originally published on The Daily Torch and is republished here with permission. Please support their efforts.