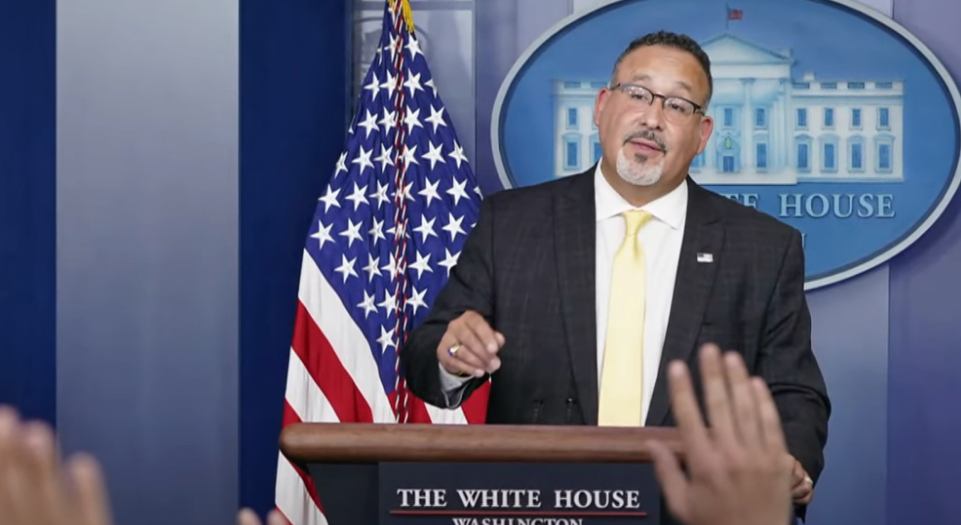 Instead of investigating states that have banned mask mandates in schools, the Biden Department of Education ought to should investigate NYC’s racially discriminatory Covid restrictions.

Secretary of Education Miguel Cardona announced in a press release he will investigate five states that have banned mask mandates in public institutions on the grounds they are violating the rights of disabled persons.

The Biden Department of Education has launched civil-rights probes against five Republican-led states that banned mask mandates in public institutions.

“The Department has heard from parents from across the country – particularly parents of students with disabilities and with underlying medical conditions – about how state bans on universal indoor masking are putting their children at risk and preventing them from accessing in-person learning equally,” Secretary of Education Miguel Cardona said in a press release.

According to a report in National Review, the department’s Office for Civil Rights (OCR) sent letters to education leaders in Oklahoma, South Carolina, Iowa, Tennessee, and Utah. The recipients did not include Florida or Texas, whose governors have been battling school districts in their states over mask requirements for weeks. However, the agency said it is “closely monitoring” the conduct of those states and is prepared to take action against them if warranted. OCR will investigate whether the states in question have violated Section 504 of the Rehabilitation Act of 1973 and Title II of the Americans with Disabilities Act of 1990, which deal with discrimination.

Given the fact that African-Americans are significantly less likely to get the COVID vaccine than other demographic groups, if the Biden Administration were actually concerned about civil rights, they would open a probe of every organization that is mandating vaccines for entrance or participation.

On the mask front, the Americans with Disability Act requires that accommodations be made for people with breathing diseases, such as asthma, who cannot wear masks. They are a protected group under the law. So, once again, any probe under the law must be of those who are violating the rights of people with disabilities rather than states which are making masks an individual choice.

Finally, I will take seriously the Justice Department’s concern about COVID-related civil rights abuses the moment they serve former Governor Andrew Cuomo a subpoena to testify about his nursing home policies which led to tens of thousands of elderly deaths. The Cuomo policies were state-sanctioned senior abuse and a full and complete federal investigation should be undertaken to determine if Cuomo was deliberately targeting seniors to die or if he was just an incompetent boob who was so worried about his Emmy-winning performances that he didn’t care that he was killing many of the most vulnerable seniors in the state so long as his make-up was right in his daily press conference reality show.

Beginning Sept. 13, New York City will become the first U.S. city to require proof of at least one dose of a coronavirus vaccine for a variety of activities for workers and customers — indoor dining, gyms and performances. According to city data, only 28 percent of Black in New York City between the ages of 18-44 are fully vaccinated.

This post, Biden Education Secretary Plays Politics with Mask Mandates, was originally published on The Daily Torch and is republished here with permission. Please support their efforts.