Woman fights government to live in her own house 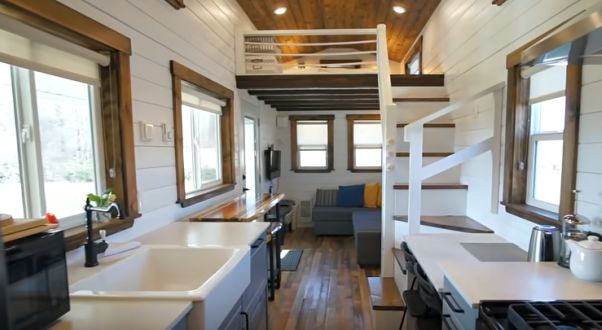 A Boise, Idaho, area woman is fighting an agenda by her local town code enforcement officials who have ordered her to leave the home she owns, which is a “tiny home” parked on a rented parcel of ground, or face fines and jail time.

The Institute for Justice said it is pursuing the battle on behalf of Chasidy Decker.

She had been priced out of the roaring real estate market in the Boise area, but “she found a way to continue living in the area she calls home: she bought a beautiful tiny home she arranged to park on Meridian homeowner Robert Calacal’s private property for modest rent.”

Then city officials showed up.

They threatened both Decker and Calacal with fines and jail in order to coerce her leave.

But the actions, the IJ charges, are unconstitutional, because the local ban on “tiny homes of wheels” actually violates the Idaho Constitution.

According to a report from the IJ’s Matt Powers, the state constitution requires that all laws have a legitimate government interest.

“But Meridian’s ban has none—Chasidy’s home is perfectly safe, which Meridian conceded when they encouraged her to move it to an RV park to live in. The city also can’t argue that her home would somehow affect the appearance of the neighborhood since her tiny home is perfectly legal to keep where it’s parked—she just can’t live in it,” the report explained.

“Chasidy’s tiny home also fits right into her neighborhood, which has many RVs and trailers, several of which are always hooked up to traditional homes.”

And the situation gets worse. After Decker was ordered out, she told her story to the Idaho Statesman, and a city code enforcer “angrily confronted Chasidy about it. After the article, the officer also cited Chasidy and Robert for trivial parking and vehicle violations,” the report said.

But, the state constitution protects free speech and prevents exactly this type of retaliation by government officials, the IJ said.

“At a time when so few housing options are available to low- and middle-income Americans, why is the city’s zoning ordinance further reducing such options?” said IJ Senior Attorney Dan Alban. “Cities should be making it easier for residents to find affordable housing, not more difficult.”

IJ is a veteran of such fights, already having won battles over a plan to grow vegetables in a yard and to bake and sell food from a home kitchen.

Regarding housing, it currently is fighting a zoning ban on tiny homes in a Georgia city.

The IJ reported Decker grew up in the area, but left in 2019 to help her mother when her grandfather died.

While she was gone, housing prices exploded more than 100%.

“Luckily for Chasidy, she had already bought her tiny house on wheels and had been living in it while helping her mom. All she had to do was find a place to park it. Chasidy searched for months and eventually found that Robert would let her park it on his property for $600 per month plus about $100 per month for utilities,” IJ reported.

It took only a day for code officers to order her to leave. The home was fine where it was, officials said, but she couldn’t live in it.

“When Chasidy pointed out that other people in the neighborhood were living in RVs, tiny homes, and similar vehicles, the code enforcement officer claimed that other neighbors are allowed to live in them because they have been there a long time, whereas Robert recently arrived from California,” the IJ reported.