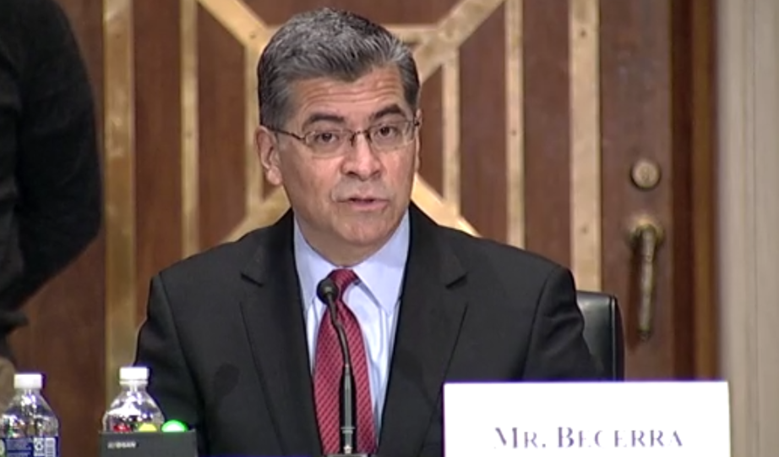 Nobody, not even a Senate Republican, asked the question about what Biden’s public option might look like. The Senate and the American people are left to wonder what Biden and Becerra’s plan for the public option really is.

President Joe Biden has nominated former California Attorney General and Congressman Xavier Becerra to be the next Secretary of the Department of Health and Human Services (HHS), and with his long history of supporting single payer socialized medicine in the form of Medicare for all, the danger is that what Biden cannot achieve legislatively to create the public option he campaigned on, he will delegate to Becerra to achieve via regulation.

One key area of the Obamacare statute is that the HHS Secretary oversees Section 1332 and Section 1115 waivers that states can utilize federal funding to expand coverage or offer new types of health plans, such as for state-level public options — all without any Congressional approval.

Using a combination of these waivers, Vermont in the early 2010s was poised to set up a single payer option, and only budgetary limits in the law prevented it from coming to fruition. “They gave us all the waivers we needed to get it done,” said former Vermont Governor Peter Shumlin, speaking with the New York Times’ Sarah Kliff in December, who gave up on the plan when the state considered the tax increases that would be necessary to implement it.

Under federal law, HHS-issued waivers have to be budget neutral, meaning whatever plan a state comes up with cannot cost more than what the federal taxpayers would otherwise pay for Medicare, Medicaid and Obamacare subsidies, and so the Vermont plan was scrapped.

But that was then. Now, with Becerra at the HHS helm, the Biden administration could be looking for ways around that, using budget accounting gimmicks via new regulatory guidance to allow for deficit-spending upfront.

For example, Dylan Scott at Vox.com in Nov. 2020 proposed that the “Biden administration could conceivably take a looser interpretation of budget neutrality. Maybe, to float one example, the program only needs to be budget-neutral by the end of a 10-year window, but could run deficits in the earlier years of the program. While the new president might not want to be seen as a big-spending Democrat, based on some comments from his close advisers, this more flexible approach may be what is necessary to achieve substantive change without any cooperation from Congress.”

Similarly, in Dec. 2020, the New York Times’ Sarah Kliff wrote, “An enterprising health secretary, working in partnership with a state, could also go even further. Some experts believe that a combination of Medicare, Medicaid and Affordable Care Act waivers could allow a state to build a single-payer plan with all of its federal health dollars.”

Here, Scott and Kliff are proposing via trial balloon to radically reinterpret 42 U.S. Code § 18052(a)(1)(B)(ii), which currently states that in order to qualify for a state innovation waiver requires “a 10-year budget plan for such plan that is budget neutral for the Federal Government”.

But with the U.S. Senate so closely divided and the Senate filibuster still in place, if it cannot be achieved legislatively, his administration might have to resort to this sort of budget chicanery to achieve the objective — which is where Becerra would have to come in. But the law seems pretty clear. Becerra cannot change the meaning of budget neutrality as not adding to the deficit. Good luck getting that past the Supreme Court.

The hard truth for Biden and his supporters is this: His party would have had to have done much better in the House and Senate to make it possible for the public option to be done via legislation. Instead, Democrats lost 13 seats in the House and the Senate is evenly divided 50 to 50, and in the 2022 midterms, Republicans stand a significant chance of flipping one or both houses of Congress.

At Becerra’s confirmation hearing on Feb. 23, Sen. Bernie Sanders (I-Vt.) was the only Senator to ask Becerra about what he would do to guarantee universal health coverage: “What are you going to do if confirmed to move this country forward to provide health care to all people…?”

To which, Becerra vaguely replied, “I believe President Biden made it very clear if we work hard to build on the Affordable Care Act and if we continue to make improvements we will get to that point where we will finally as the leading nation of the world be able to say that we do cover all of our people.”

And Sanders let him get away with that answer, instead putting forward a follow-up question prescription drugs.

Becerra failed to elaborate on what the Biden administration and HHS would actually do via regulation, or whether it was Congress that needed to act, in order to achieve universal coverage. Maybe the plan doesn’t get out of the starting gate because Democrats simply lack the votes in the Senate, and Biden doesn’t want to chance a regulatory scheme that might not pass judicial constitutional and legal muster in a Republican-appointed Supreme Court majority of 6 to 3.

Are Biden and the Democrats giving up on their plans to pursue the public option? We’re left to wonder.

And maybe that’s the idea. Since nobody, not even a Senate Republican, asked the question about what Biden’s public option might look like, the Senate and the American people are left to wonder what Biden and Becerra’s plan for the public option really is. The Senate does not seem to be too concerned about it, so maybe they just don’t think it’s going to happen. Once again, they’ll just have to vote for Becerra to find out what’s in his tenure of office.

This post, Will Xavier Becerra issue waivers for state-level public options—without Congressional approval?, was originally published on The Daily Torch and is republished here with permission. Please support their efforts.