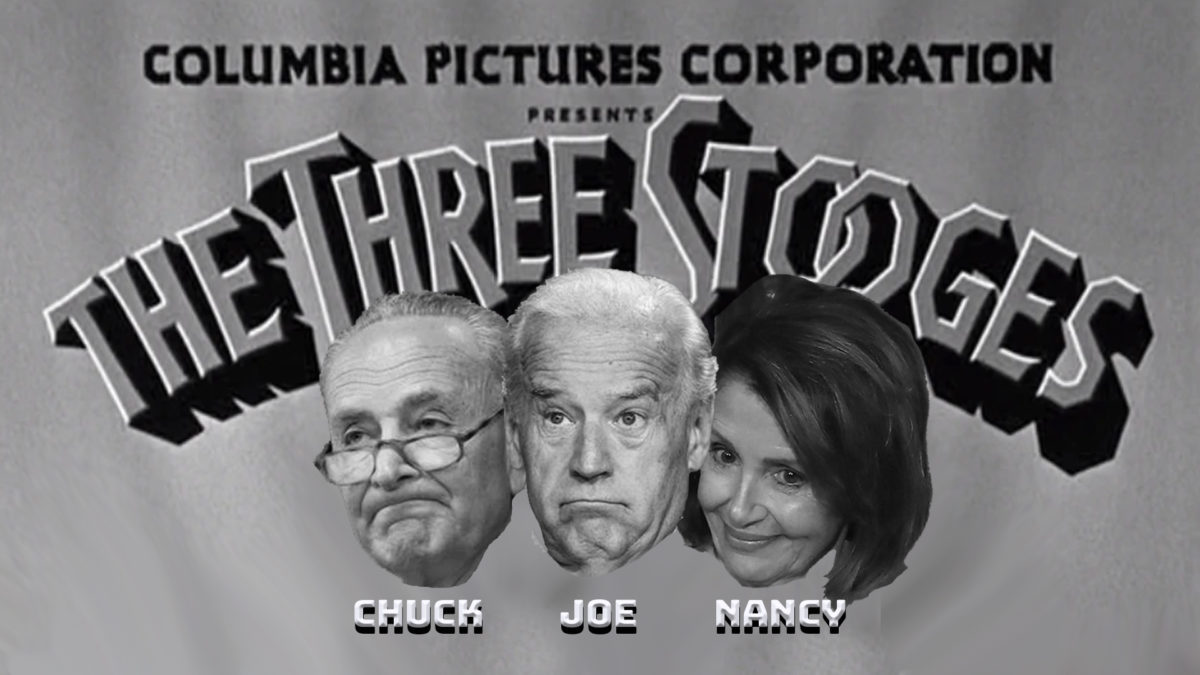 “The Three Stooges of the Apocalypse have discovered ‘free money’ is good politics, but only in the short-term.”

President Joe Biden, House Speaker Nancy Pelosi and Senate Majority Leader Chuck Schumer, the Three Stooges of the Apocalypse, are destroying our country. They, along with every Democrat senator, and all but one Democrat in the House have discovered that giving people ‘free money’ in the form of government checks has no political downside. The fact that only one Democrat in all of Washington, D.C. rejected the bloated spending bill is a clear sign these elected officials see zero political risk to what they are doing. When politicians see nothing but upside, you can bet they will pursue that course to the end. In this case, the end will be the destruction of our country.

For the past 12 months, many Americans have lived in fear of a virus that has a survival rate of more than 98 percent. I have not been one of them. But what does frighten me, is the Democrat’s response to the virus. They are exploiting it to gain a permanent political majority in Washington by handing out ‘free money’ to every American, with the promise that there is more where that came from.

Sen. Schumer said earlier this week, “If [the American people] need more help, we’ll do another bill.” Just as Margaret Thatcher said, “The problem with socialism is that you eventually run out of other people’s money.”

The Wall Street Journal editorial board explained how Democrats are using this bill to turn every American into a ward of the State.

“Only a small part of what Democrats passed is for pandemic or economic relief. It’s mainly a way station on their high-speed train to a cradle-to-grave welfare-entitlement state. Most of the $1.9 trillion will flow to government unions or supposedly temporary income transfers that Democrats intend to make permanent later this year.

The $300 federal enhanced weekly jobless benefit, which will be extended through Sept. 6. Most Democrats want to detach welfare from work as a matter of principle…Most unemployed workers will still make at least $600 per week when state benefits are included and as much as they did working. Democrats also exempted the first $10,200 in payments collected last year from federal taxes for households with less than $150,000 in income. This exemption will boost their value by up to 24% depending on a household’s income and tax bracket.

All of this arrives when the Covid vaccine rollout is accelerating, the economy is recovering at a rapid pace, and the national jobless rate is already down to 6.2%. The goal of this Democratic program isn’t Covid relief. The point is to expand and solidify the role of government as the guarantor of every American’s income unlinked to any obligation to work.

Americans who have lost their jobs or their businesses will greatly benefit from this additional spending, and I believe they ought to get additional aid. But what would be of even greater benefit to them is if the government simply lifted all Covid restrictions and allowed people to go about their lives.

But this business of sending every American, regardless of need, a check will destroy our country. Politicians will do this again and again because it’s good politics, but only in the short term. By the time it becomes bad politics, every one of these clowns will be long gone and it will our children and grandchildren left with nothing but memories of a once great nation.

This post, Why I’m More Terrified of the Democrat’s Covid Spending Bill than Covid Itself, was originally published on The Daily Torch and is republished here with permission. Please support their efforts.