White House admits it might shut down ANOTHER pipeline 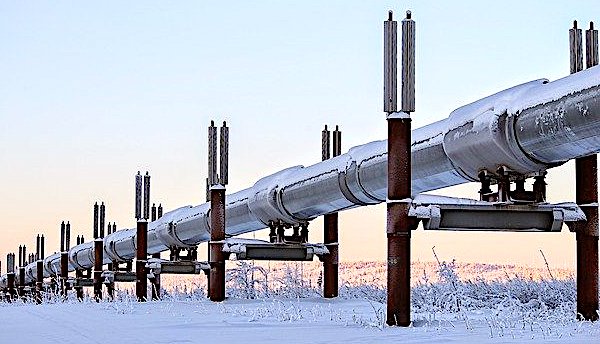 Confronted with a news report of a Biden administration plan to shut down another oil pipeline amid spiking energy costs, the White House called the report “inaccurate” while acknowledging the project is facing an environmental-impact review.

Doocy asked Jean-Pierre why, with the secretary of energy warning it will cost Americans more to heat their homes this winter, is “the administration now considering shutting down the Line 5 pipeline from Canada to Michigan.”

“So, Peter, that is inaccurate, that is not right,” she replied.

“So,” the spokeswoman continued, reading from her notes, “any reporting indicating some decision has been made, again, is not accurate.”

Jean-Pierre said Canada has “decided to invoke the dispute resolution provisions of the 1977 Transit Pipelines Treaty,” and the pipeline is subject to litigation between the Canadian pipeline company, Enbridge Inc., and the state of Michigan.

Line 5 moves about 540,000 of crude oil and other petroleum products barrels a day from western Canada to Escanaba, Michigan, on the state’s Upper Peninsula. Enbridge wants to extend the pipeline to the rest of the state and to Ontario by building a tunnel under Lake Michigan, which it argues is safer than surface transportation.

“The reporting, the reporting about us wanting to shut down the Line 5,” she responded.

“Is the administration studying the impact of shutting down the Line 5?” the Fox News reporter asked.

“So what is inaccurate?”

“Well, I thought you were saying that we were going to shut it down,” she said.

Jean-Pierre added that the Army Corps of Engineers is preparing an “environmental impact” statement on the tunnel.

President Biden’s cancellation of TC Energy Corp.’s Keystone XL project upon entering office drew outrage from across the political spectrum as well as from Canada, where the pipeline originates.

The administration’s consideration of doing the same with Line 5 is “just one more example of being divorced from reality,” charged Jason Hayes, the director of environmental policy at the Mackinac Center for Public Policy.

Hayes presented a dire picture of what shutting Line 5 could mean if people are unable to get natural gas or the electricity it provides as the nation heads into winter.

He fears people will end up “freezing in their homes,” as many did in Texas last winter.

“It seems like the only nations that understand that we require reliable, affordable dispatchable energy is China and Russia,” Hayes said. “And they’re the only ones that are producing energy, and they’re more than happy to hold that energy hostage for the rest of the world.”

On Capitol Hill, more than a dozen Republican lawmakers sent a letter to Biden warning against shutting down the Michigan pipeline as gas prices soar 50%.