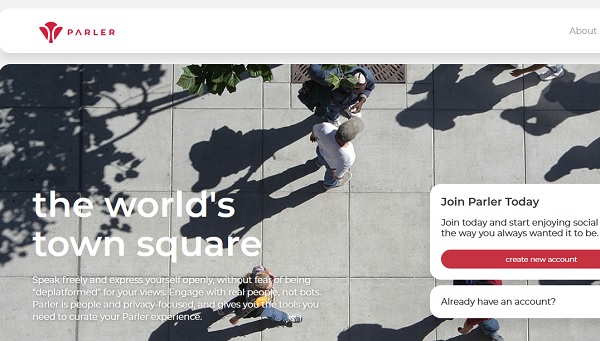 Parler, the social-media site favored by conservatives and targeted for destruction by Big Tech’s Amazon, Apple and Google, returned to the internet on Monday.

But it didn’t announce where the company was hosting its new servers, only that its platform is built on “robust, sustainable, independent technology.”

It was removed from the web a month ago when Amazon pulled the plug on the service its Amazon Web Services were providing.

Apple and Google had removed the app from their online app stores.

The Washington Examiner noted the Big Tech attack came over disputes regarding terms of service.

“Parler was built to offer a social-media platform that protects free speech and values privacy and civil discourse. When Parler was taken offline in January by those who desire to silence tens of millions of Americans, our team came together, determined to keep our promise to our highly engaged community that we would return stronger than ever. We’re thrilled to welcome everyone back,” said Mark Meckler, the company’s interim CEO, said in a statement.

“Parler is being run by an experienced team and is here to stay. We will thrive as the premier social-media platform dedicated to free speech, privacy and civil dialogue.”

Meckler indicated that the 20 million users who had been online on the platform can use their previous login information. Service was being restored on a step-by-step procedure and most users were predicted to have access over the course of Monday.

Signups for new users are expected to resume next week.

It was after the November 3 presidential election that the company’s popularity surged over both feared and active censorship of conservative opinions on Facebook, Twitter and others.

Parler also has sued Amazon for its attack.

Parler, which calls itself “the world’s #1 free speech social media platform,” said in its announcement it is not reliant on “so-called ‘Big Tech’” for its operations.

It also said it is conducting a search for a permanent CEO.

Meckler, the interim CEO, is an attorney, entrepreneur, and free speech advocate.

“He has expertise in launching, growing and developing effective business and technology models for two of the largest grassroots organizations in modern American history, Tea Party Patriots and Convention of States. He was appointed interim CEO to help guide Parler through its relaunch and search for a new, permanent CEO,” the company said.

Fox Business reported the moves against Parler came “as liberals and many media pundits championed the move to de-platform the social media app.”

An Apple official, at the time, claimed. “Parler has not taken adequate measures to address the proliferation of these threats to people’s safety. We have suspended Parler from the App Store until they resolve these issues.”

Parler’s Chief Policy Officer Amy Peikoff told “Fox & Friends Weekend” at the time that company was being singled out even as it surged to the No. 1 spot among free apps.