Watch: Meadows drops bomb on impeachment, changes everything if true 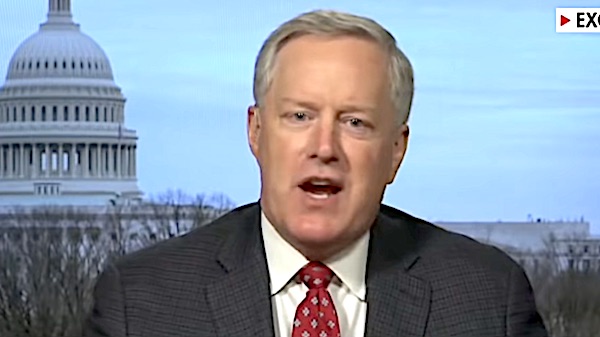 There remain a lot of questions to be answered about the security that was provided at the U.S. Capitol on January 6, when rioters broke in and vandalized the building.

But one that appears to have been answered by a statement from former White House Chief of Staff Mark Meadows is that President Trump had made repeated efforts to make sure there were adequate resources provided.

Meadows revealed that the president offered security assistance to Capitol and congressional officials multiple times and was turned down.

According to a report in Populist Press, Meadows was appearing with Maria Bartiromo for a discussion about the riot that briefly disrupted the congressional vote to adopt the Electoral College decision giving the White House to Joe Biden.

He said, “We also know that in January, but also throughout the summer, that the president was very vocal in making sure that we had plenty of National Guard, plenty of additional support because he supports our rule of law and supports our law enforcement and offered additional help.”

Meadows said, “Even in January, that was a given, as many as 10,000 National Guard troops were told to be on the ready by the Secretary of Defense,” he said. “That was a direct order from President Trump and yet here is what we see, all kinds of blame going around but yet not a whole lot of accountability.”

Rioters simply charged into the building to do vandalism and take selfies, overwhelming Capitol police officers, who report to Congress, who were on duty there.

After the fact, thousands of National Guard troops were dispatched to the Capitol, where they remain at a cost that now is reaching into the hundreds of millions of dollars.

Also, security fencing as been erected around the Capitol and there is talk of building permanent barriers to keep people out.

The comments from Meadows came during an interview in which he accused the Biden administration of being active, but “not on behalf of the American people. It’s on behalf of special interests.”

The riot also has been used as a springboard by Democrats to launch their second impeach-and-remove scheme against President Trump, even though he’s already finished his first term. Their first plan failed a year ago.

House Speaker Nancy Pelosi ordered the House to discuss for two hours her claim he incited insurrection when he spoke to a rally that morning, asking his supporters to go to the Capitol “peacefully” and protest an election result he considered fraudulent.

Pelosi then had the House vote, without witnesses and without evidence, on a “snap impeachment.” That charge is being considered in a Senate trial that is starting this week, even though even leftist First Amendment experts affirm Trump’s speech was protected by the Constitution.

And evidence has been uncovered that shows some of the rioters planned their violence weeks in advance, making Trump’s speech that morning irrelevant to their goals.

A previous, preliminary vote on the issue of impeachment found that 45 senators didn’t think the process should go forward, meaning Democrats in the 50-50 Senate are unlikely to get 17 Republican senators to join their partisan campaign against Trump, the number that would be needed to convict.

In fact, several Democrat leaders have openly admitted their goal is to adopt some sort of provision that would prevent Trump from running for office again, fearing what he could do to a Democrat candidate in a race in 2024.

Impeachment critics have charged that what Democrats are doing is unconstitutional because the Constitution provides impeachment only for someone who still is in office.

Meadows confirmed Trump had tried to help provide security against anyone who might get out of hand.

“But we also know this. Help was offered multiple times, not just in January, but throughout the summer, with the D.C. mayor, saying that the president stood by willing to offer National Guard assistance, other assistance, and often, in fact, every time, was rebuked and said, no, we can go it alone,” Meadows said.