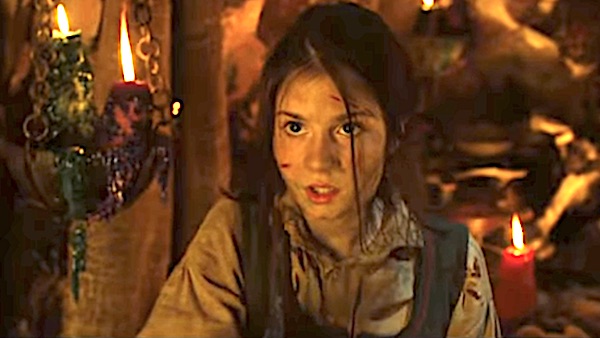 A popular Bible TV show is probing the notion that one of the most famous children’s stories of all time is actually an unmistakable metaphor for the main storyline for human beings in Holy Scripture.

“Shabbat Night Live” recently investigated the classic tale “Hansel and Gretel,” as it featured Joe Kovacs, author of the new bestseller, “Reaching God Speed: Unlocking the Secret Broadcast Revealing the Mystery of Everything.”

The book opens readers’ eyes and ears to the Spirit or parable level of the Bible, since the New Testament indicates Jesus Himself spoke exclusively in parables (Matthew 13:34).

On the television program, Kovacs noted while all stories we tell somehow voice the messages of Scripture, “Hansel and Gretel” is especially easy to understand.

“We’re all taught this story probably in kindergarten or even earlier about children who are lost in the wilderness,” Kovacs told host Scott Laird, who was filling in for Michael Rood. “They’re trying to find their way home, they come across a house in the wilderness filled with all kinds of treats on the outside.

“They’re really lured into this house, but they don’t know this house is run by a wicked individual – a witch, as a matter of fact – who [it] turns out, wants to devour the children herself, to actually eat the kids, and places them in captivity inside her own house, and is getting ready to put them in an oven until the children fight back.

“Gretel gets up the courage and fights back and throws the wicked one into the blazing fire, the furnace, the oven, however you wish to say it. Everybody knows this story. But this is a perfect analogy for the Spirit level of God speed. It is the whole message of what we’re doing here.”

Kovacs then translated the story to reveal the stunning biblical connection to our own human existence and what’s prophesied to happen in the future.

“WE are the children lost in the wilderness,” he began. “We’re trying to find our way back home to our heavenly Parent if you want to think of it that way because this world is a wilderness. The Bible calls it a wilderness many times and we all realize that this is not our permanent home. We’re trying to get back there, but we’re being lured by an evil individual, the devil, through all kinds of things that we lust for.

“We’re drawn away from God, and so we’re being held in captivity, in bondage, by the wicked individual. In the story of the children Hansel and Gretel, it’s a witch. In the spiritual story, we’re all in captivity held by the devil. Jesus even said he came to free the prisoners (Luke 4:18).

“We are the prisoners. We’re being held captive and we have to ‘fight the good fight of faith’ as the New Testament says (1 Timothy 6:12) against the wicked one to put the wicked one in the fiery furnace, in the blazing oven if you want to think of it that way, because [when] you read Revelation, it’s the devil who ends up going into the Gehenna fire, the fiery oven, the furnace, if you will.

Watch the interview about Hansel and Gretel:

Laird picked up on the analogy, and noted: “There’s a phrase we have in today’s world called ‘eye candy.’ So something we see is eye candy, just like the house with ‘Hansel and Gretel.’ It’s something sweet to eat and we think it’s gonna be good for us, but in the end, even as Solomon mentions in Proverbs, a little bit of honey is good, but too much will make you sick” (Proverbs 25:16).

“People get addicted to all kinds [of eye candy],” Kovacs responded.

“I mentioned sports earlier, but it could be anything. People get addicted to their jobs, they’re workaholics, or they get addicted to social media. I see this [people swiping their fingers on cell phones] going on all the time, everywhere. … Anything that takes your attention away from God becomes an idol to people. The kids in the ‘Hansel and Gretel’ story, they were addicted to sweets and treats. But we go after all these different things, and it could be anything, anything that takes your attention away from God.”

Laird then added: “I don’t know if you’ve ever seen an illustrated version of that story in a book … I can imagine them putting this wicked witch is this hunched over, evil-looking person. But I don’t think of it like that now that you’ve sort of said this. It’s like once someone explains a story the way you have, you can’t unsee it, or you can’t unhear it.

“Now you’re thinking about it in a different way, It would almost seem like when Hansel and Gretel went into the house where it’s all made of candy, the person who lived in there, you’d think would be a very beautiful-looking person. It would not look like they were a danger to them. It would be, ‘Oh, come in, enjoy some candy.’ This would be a very attractive type of person, just like anything attractive that we go after may not be good for us.”

“Right,” said Kovacs. “The New Testament actually says the devil ‘masquerades as an angel of light’ (2 Corinthians 11:14), or he makes himself appear as an angel of light, so people can think that they’re doing the right thing sometimes, when they’re not. That’s why we have to discern things.

“Again, we live in the land of the ‘knowledge of good and evil’ (Genesis 2:9). Both are present at all times. So no matter who we’re talking to, or what kind of business we’re engaging in, we have to be aware that both things are present and we have to choose the good and reject the evil. Choose life as the Bible says! (Deuteronomy 30:19)

Kovacs concluded: “The more that we get in line with the instructions of God – whether you call them the commandments or the law, however you wish to phrase it – God is telling you how to get eternal life. He’s GIVING us eternal life! It’s free! We just have to keep rejecting the evil in life.”

Watch a clip from the 2013 movie “Hansel & Gretel: Witch Hunters” showing the climax of the classic story:

(Note: ‘Reaching God Speed’ is now an audiobook, plus Amazon has hardcover editions of this book back in stock! Hardcovers may also be available through other booksellers, including Barnes & Noble, Books-A-Million, and ConservativeReaders.)

The book rocketed to the #1 position in several Amazon categories both before and since its official release.

God revealing your future through one thing that happens every day

End-time alert: Why does Jesus say ‘no flesh would be saved’?

‘The Terminators’: Battle over birthing (and killing) kids has extra dimension

Secrets of Sodom and Gomorrah unearthed, including pillar of salt

Is vicious attack on Bible hero a violent assault against God?

‘You can’t unsee it!’: Mind-blowing double and triple meaning in 1 resurrection verse