Walmart to workers: You're racists 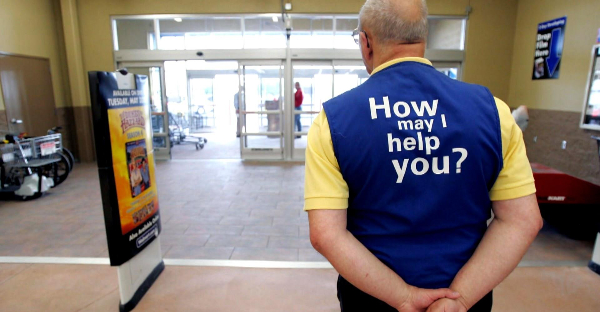 Walmart has a training program for its employees based on the core principles of Critical Race Theory that asserts whites are inherently racist and the United States is a “white supremacy system” designed by white Europeans “for the purpose of assigning and maintaining white skin access to power and privilege,” according to internal documents.

The evidence was obtained from a whistleblower by Christopher Rufo, whose research into the implementation of Critical Race Theory in K-12 schools has fueled protest from parents in school board meetings across the nation.

The program begins with the claim that colonists constructed a “white race” in 1680 that has led to white Americans undergoing “racist conditioning” that indoctrinates them into “white supremacy.”

Rufo, a senior fellow at the Manhattan Institute and a contributing editor of the think tank’s City Journal, wrote Thursday that Walmart has trained more than 1,000 employees and made the program mandatory for executives and recommended for hourly wage workers in its stores.

The retail giant launched the program in 2018 in partnership with the Racial Equity Institute, a consulting firm in Greensboro, North Carolina, that has worked with universities, government agencies and private corporations.

Walmart confirmed to Rufo that the company has “engaged REI for a number of training sessions since 2018” and has “found these sessions to be thought provoking and constructive.”

The problem, the program asserts, must be addressed through “white anti-racist development,” a psychological conditioning program that reorients white consciousness toward “anti-racism.”

Walmart’s program sumarizes “white supremacy culture” as a list of characterisitics that include “individualism,” “objectivity,” “paternalism,” “defensiveness,” “power hoarding,” “right to comfort “and “worship of the written word.”

White employees who hold thoughts such as “I’m normal,” “we’re all the same” and “I am not the problem” are indulging in racist constructs rooted in internalized racial superiority, according to the program.

Whites must accept the idea that “white is not right” and acknowledge their guilt and shame.

Rufo noted that for years, activists have attacked the Walmart’s business practices, and the CRT program helps “shift blame to forces beyond its control.”

Rufo said the whistleblower describes Walmart CEO Doug McMillon as a “true believer” in CRT who hopes to export “woke ideology” to every Fortune 100 company through his role as chairman of the Business Roundtable.

“The formula is clear: American executives, among the most successful people on the planet, can collect accolades and social status by promoting fashionable left-wing ideologies,” Rufo wrote.

“Meantime, their hourly workers, making between $25,000 and $30,000 yearly, are asked to undergo dishonest and humiliating rituals to confront their ‘white privilege’ and ‘white supremacy thinking.’ McMillon gets the social justice credit; his workers pay the price.”