Voters don't believe Biden on one issue that hits every American 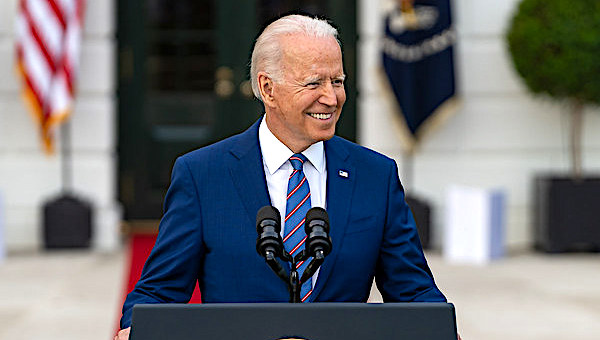 Joe Biden has promised over and over that he won’t raise taxes on Americans making less than a massive $400,000 a year.

Only that’s not accurate, because married couples would, analysts have confirmed.

And he even muffed his promise one time, claiming then that Americans making under $400,000 would “not pay a single penny in taxes.”

A new Scott Rasmussen poll shows 61% of voters “believe it is likely that the Biden administration will raise taxes on middle class Americans. The national survey found 27% consider it unlikely and 12% are not sure.”

“These results are especially stunning given that, before being asked the question, survey respondents were reminded that President Biden has promised not to raise taxes on anyone earning less than $400,000 a year,” the poll reported.

The survey of 1,200 registered voters was conducted online by Scott Rasmussen from August 4-9, 2021.

The Washington Examiner noted, “The White House has said repeatedly that Democrats’ spending on infrastructure and families is popular with voters across the political aisle and will spur economic growth, seeking to allay concerns over inflationary pressures and the high cost.”

The Senate this week adopted a more than trillion dollar “infrastructure” bill that actually does contain a small amount of infrastructure work, and then Democrats immediately launched into their plans to spend another $3.5 trillion or $4 trillion on mostly social programs.

No Republicans are expected to support that explosion in federal spending – or the tax increases that would be required.

And Democrats in competitive congressional districts have gotten worried enough to voice alarm about the spending.

A HarrisX/No Labels poll recently found more than two-thirds of voters in 33 swing districts and closely watched House districts are concerned the high spending could harm their pocketbooks through inflation and higher taxes.

In fact, Americans already are paying the price for Biden’s economy in higher prices for food, fuel and more.

Biden has touted plans to raise taxes on “corporations,” without acknowledging that customers, in fact, pay those indirectly through the fees they are charged for the products or services they purchase.