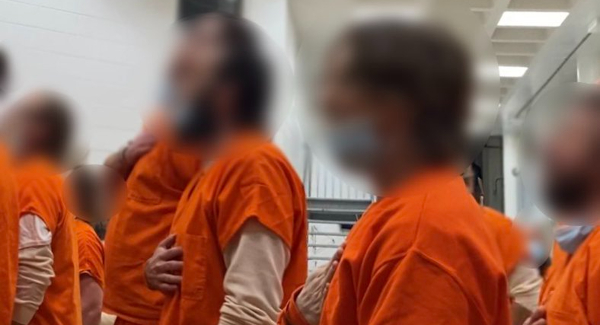 A 71-year-old Vietnam veteran – and “Biden political prisoner” – is pleading for his freedom.

According to the The Gateway Pundit, Lonnie Coffman told his story on the Greg Kelly Reports to document his predicament.

And he sent a letter to The Gateway Pundit, which explained he’s being held “unconstitutionally with no bond.”

“We are not domestic terrorists like they are saying, we are patriots and we love America,” he said. “We need your support.”

At issue are dozens, perhaps hundreds, of people arrested at the Capitol on Jan. 6. That was the day President Trump held a morning rally and told fans to protest congressional plans to adopt a challenged voted count that would make Joe Biden president “peacefully.”

Hundreds entered the Capitol building, sometimes as security officers held the doors open for them. Others broke some windows or doors to enter, and they then vandalized parts of the rooms.

Part of the issue is that many of those have been held without bond in Washington’s jails ever since, despite procedures that call for bond hearings and release until a trial.

Conversely, federal prosecutors mostly gave free passes to the thousands of Black Lives Matter activists who rioted in hundreds of cities over the course of 2020, causing damage estimated in the hundreds of millions of dollars.

And hear the comments from a fellow “political prisoner” in Washington:

Coffman, a retired Army sergeant, told The Gateway Pundit how he was arrested and taken to “a dungeon.”

The food was a cold dry sandwich and the bed “a flat piece of sheet metal with no mattress or bedding of any kind.”

The facility does feature “coachroaches.”

He was moved, and the second prison forced him to use his toothbrush handle to eat, he struggled through a quarantine period without his regular medications, and he described how jail officials were “pushing” him toward suicide.

Later he was given the privilege of “23 hour/day lockdown.”

But lack of “proper diet” and cleanliness handed him “serious skin conditions.”

In a followup letter, Coffman said one of his charges was for weapons without permits. He had, without considering the atmosphere in Washington, parked near the DNC office building that day, a building that reportedly was targeted with a pipe bomb.

He went to the rally and then headed back to his truck. His story:

On my way back, I stopped at this very small, but lovely little church building. I was only there for a couple of minutes. Little did I know at the time, but that couple of minutes had just cost me 9 months and still counting. So, I left the little church and headed on to my truck. I walked on for about 15 minutes and there was my truck, about 50 yards ahead. All I had to do was cross the intersection and walk another 120 ft, but just before I got to the intersection a police cruiser with lights and siren on came flying from out of nowhere and blocked the intersection, and would not allow vehicles or pedestrians to go any farther. I could see my truck but I couldn’t get to it. I thought to myself, there is only one officer so maybe I could walk by her but I decided not to try.

But his problems were just beginning. In his rural home region, he routinely carried a rifle and some gasoline in the back of his truck.

In Washington, that was believed to be a threat, including the threat of Molotov cocktails.

The Gateway Pundit cited the charging documents, which accused him of having Molotov cocktails and “any combination of parts designed and intended for use in converting any device into a Molotov cocktail.”

His jailmate. Jonathan Mellis, said in the report, “This poor man. It was jars of old gasoline he kept in his truck from home and they are calling it Molotov cocktails! It’s so wrong. Lonnie is the sweetest old man you would ever hope meet, he would not or could not hurt a fly. If you met this gentle old man you would fall in love with him. We call him Pops in here, he is like a grandfather to us and we look after him. What they are doing to this man is terrible, somebody has to save him. If he is in here for even a few more years that is a life sentence for this poor man.”

Law enforcement has suggested a pipe bomb at the DNC was a possible diversion, and the FBI has confirmed that no one group or person coordinated the events.