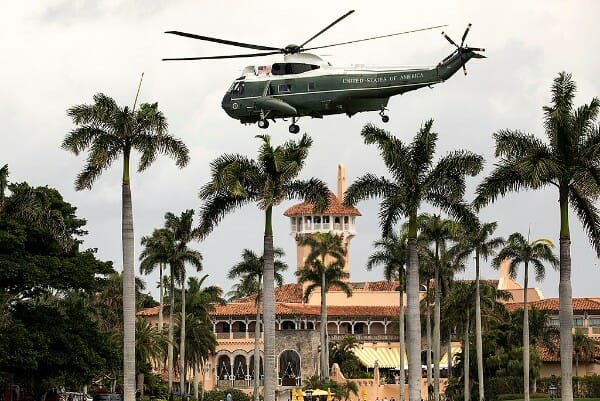 Former President Trump said Monday evening his Mar-A-Lago home in Palm Beach, Florida, was “under siege” by a “large group” of FBI agents in a predawn raid.

“Nothing like this has ever happened to a President of the United States before,” he wrote in a statement.

“After working and cooperating with the relevant Government agencies, this unannounced raid on my home was not necessary or appropriate,” Trump said. “It is prosecutorial misconduct, the weaponization of the Justice System, and an attack by Radical Left Democrats who desperately don’t want me to run for President in 2024, especially based on recent polls, and who will likewise do anything to stop Republicans and Conservatives in the upcoming Midterm Elections.”

Trump said that such “an assault could only take place in broken, Third-World Countries.”

“Sadly, America has now become one of those Countries, corrupt at a level not seen before,” Trump said.

He alleged the FBI agents broke into his safe.

“What is the difference between this and Watergate, where operatives broke into the Democrat National Committee?” he asked. “Here, in reverse, Democrats broke into the home of the 45th President of the United States.”

Fox News reported Trump was in New York City at Trump Tower when the raid was carried out.

An FBI source confirmed to the news channel that FBI agents from Washington, D.C., conducted the raid.

Last week, Sen. Charles Grassley, R-Iowa, announced whistleblowers from the Washington field office allege the agent in charge of their office, Timothy Thibault, helped cover up derogatory information on the Biden family’s influence peddling operation and also was “deeply involved” in the decision to open the investigation against President Trump of so-called “fake electors.”

The bureau’s Evidence Response Team conducted the raid and notified the Miami Field Office just before it was carried out.

Fox News said the Justice Department is probing the discovery of 15 boxes of records containing classified information allegedly taken to Mar-A-Lago at the end of presidency. Federal law prohibits the removal of classified documents to unauthorized locations.

However, it could be argued that Trump had the authority as president to declassify the documents.

New York Post reporter Miranda Devine said, according to her sources, the documents taken from Trump’s house were boxed up by the General Services Administration at the end of Trump’s term and mailed to him. The FBI, she said, has had access to the documents for months.

Meanwhile, the House Jan. 6 committee is investigating Trump allies regarding the former president’s challenge of the results of the 2020 election.

The GOP leader said that when Republicans “take back the House, we will conduct immediate oversight of this department, follow the facts, and leave no stone unturned.”

“Attorney General Garland, preserve your documents and clear your calendar.”

Former House speaker Newt Gingrich told Fox New host Sean Hannity the raid is about intimidating anyone who is a threat to the power of the administrative state.

“These people are bad people doing bad things,” he said, “and it’s time we said that.”

“This machine is going to die if Donald Trump wins, and they know they’re going to die because they have to survive on corruption.”

The administration, Gingrich said, “authorized something that has never happened in American history.”

Florida Republican Gov. Ron DeSantis, widely regarded as a leading candidate for the 2024 presidential nomination, said in a statement that the raid of Mar-A-Lago is “another escalation in the weaponization of federal agencies against the Regime’s political opponents, while people like Hunter Biden get treated with kid gloves.”

“Now the Regime is getting another 87k IRS agents to wield against its adversaries? Banana Republic,” he said.

His reference was to a measure to nearly double the number of employees in the agency contained in the $430 billion climate, health care and tax overhaul passed on a 51-50 party-line vote by the Senate on Sunday.

Sen. Marco Rubio, R-Fla., tweeted that after the raid on Mar-A-Lago, “what do you think the left plans to use those 87,000 new IRS agents for?”

He said President Biden “has weaponized the US government for his political purposes.”

“It’s outrageous,” he wrote. “And creating a terrible precedent.”

“This better be a slam dunk criminal case, otherwise the Biden Administration and DoJ have crossed a line of no return,” he tweeted. “If they got the goods, announce it. Otherwise this search on a former President’s home is a disgrace.”

‘They darn well better have smoking-gun proof’
Laura Trump, the wife of Trump’s son Eric, said in an interview Monday night with Fox News she spoke with her father-in-law, and he’s “as shocked as anybody” about the raid.

“Everybody from his team has been cooperating with the FBI, and there was no need to make such a big scene,” she said.

The raid, she said, is about “weaponizing the justice system against somebody you do not like.”

Steve Bannon, Trump’s former chief strategist, told Fox News the approval of the raid had to go up to the White House, through Garland, to Ron Klain, Biden’s chief of staff.

“This is about pure power politics,” he said. “They are absolutely petrified Trump is going to announce in the next couple of weeks, win the nomination, win the White House.”

Alan Dershowitz, the Harvard emeritus law professor who served as legal counsel for President Trump in his first impeachment trial, said a warrant cannot be issued if a subpoena would suffice.

The FBI, he said in an interview with Hannity, must have a “high level of cause demonstrating the evidence would have been destroyed.”

After todays raid on Mar A Lago what do you think the left plans to use those 87,000 new IRS agents for?