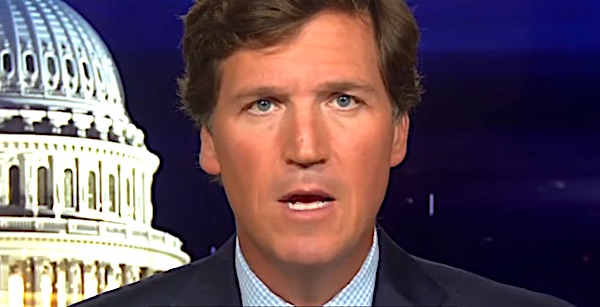 For example, the windmills that generate a good portion of the electricity used to heat homes were frozen. An estimated three million plus Texans were without power.

“Who saw that coming in Texas?” Carlson said. “If there’s one thing you would think Texas would be able to do, it’s keep the lights on. Most electricity comes from natural gas and Texas produces more of that than any place on the continent. There are huge natural gas deposits all over the state. Running out of energy in Texas is like starving to death at the grocery store: You can only do it on purpose, and Texas did.”

Local reports explained Texas was recording its coldest temperatures in years. For example, Dallas had a new record low Monday on 9 degrees. The city’s record low high that day was 14 degrees, only a bit colder than the previous record, 20 degrees in 2011.

Carlson pointed out that a part of the problem was the “Green New Deal” which “has come, believe it or not, to the state of Texas.”

He said it’s obvious global warming no longer is a problem for Texas.

“The bad news is, they don’t have electricity. The windmills froze, so the power grid failed. Millions of Texans woke up Monday morning having to boil their water because with no electricity, it couldn’t be purified.”

CNN reported that Jason Bordoff, a former Barack Obama administration official, explained “the extreme cold is causing the entire system to freeze up.”

“So in Houston, hundreds of shivering Texans headed to the convention center like refugees to keep from freezing to death. Some Texans almost certainly did freeze to death. Later this week, we’ll likely learn just how many more were killed as they tried to keep warm with jury-rigged heaters and barbecues and car exhaust,” he said.

He pointed out that rather than Texas depending on its own “vast natural resources,” its natural gas and oil production industries are essentially unrivaled, “politicians took the fashionable route and became recklessly reliant on so-called alternative energy, meaning windmills.”

He said the change has come over the last few years, and it was all working just fine “until the day it got cold outside. The windmills failed like the silly fashion accessories they are, and people in Texas died.”

The Washington Examiner even pointed out that former U.S. Energy Secretary, and former Texas governor, Rick Perry even lost a connection during an interview with Carlson.

“He’s proving the point that we’re making,” Carlson said when it became apparent that Perry lost his connection during the interview.

Carlson was attempting to ask Perry whether the state’s dependence on green energy, specifically windmills, was in part to blame for the mass power outages currently plaguing the state, the Examiner explained.

“The most basic responsibility of government is to keep the power on, especially when people need it to survive. They didn’t. Why?” Carlson asked Perry before his connection was lost.

Windmills make up about 25% of the state’s energy production at this time of year, the report said.

Others pointed out that natural gas and oil production facilities also had closed because of the cold. But some of those closures were because power had been cut to the facilities and they could not operate.