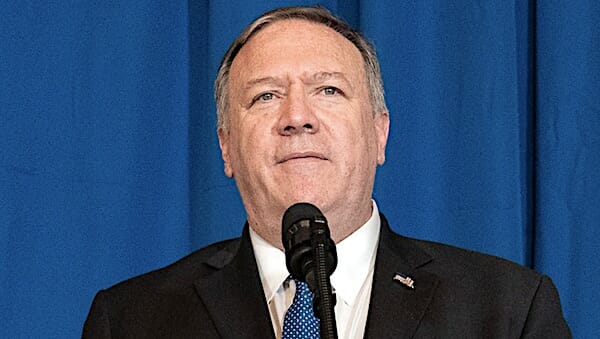 Former Secretary of State Mike Pompeo is blasting the plan by Democrats in Congress to give over control of elections to the elites in Washington, describing it as an assault on America’s democracy.

“We all know who this bill is ‘for,’ and it certainly is not ‘the People,’” he wrote in a commentary at the American Center for Law and Justice, where he now is senior counsel for global affairs.

His comments are about H.R. 1, which the Democrats claim is their “For the People Act.”

But, Pompeo warned, it would give the power in the country to “the unelected, unaccountable federal bureaucracy at the expense of the American people.”

While Democrats have said it is one of their most important agenda points in Congress now, Pompeo revealed it actually would “strip individual states of their ability to manage their own voting laws and practices and instead give this responsibility to the federal government.”

Then it would use taxpayer dollars to finance congressional campaigns and take away from state legislatures their responsibility to determine congressional districts. It also would allow Congress, with its own ethical challenges, to write an ethics code for the Supreme Court, and would ban states from confirming that voters are, in fact, legitimate voters.

Still worse, he warned, it would abolish the “Lois Lerner Rule” enacted by the Trump administration to ensure the Internal Revenue Service could not unfairly target conservative groups.

It’s named for the now-former IRS official who, during the Obama administration, targeted conservatives to hinder or handicap their work.

While that practice was stopped back then, it would return if the Democrats get their way, he said.

“This bill is for power-hungry politicians and unelected elites in Washington. It would not expand voting rights. The only thing it would expand is the size, scope, and power of the federal government. That means more bureaucracy, more unelected officials being given control over the American people, and less power for every American voter,” he warned.

“The ultimate result of going down the path of elections minus integrity is found in places like China, Venezuela, and Russia. Every failed socialist government that has existed around the world in the past 100 years has grabbed power through delegitimizing their elections. They all disregarded their people’s rights and centralized power in the hands of the few,” he said.

Under the category of “more damage,” he said, it also would make voter fraud easier to commit and harder to prosecute.

“Mass mailing ballots without requisite voter ID encourages voter fraud. Your right to vote being dependent on your proving you are an American citizen, and are who you claim to be, is not voter suppression. The sanctity of the ballot box is the cornerstone of American democracy; one vote for one person. And it has been an essential part of secure, trustworthy elections in America for decades. H.R. 1 would do away with such wisdom, granting the federal government the power to mandate nationwide acceptance of mass mail-in voting. Such an outcome would only serve to harm the integrity of our elections and undermine our people’s faith in their outcomes,” he said.