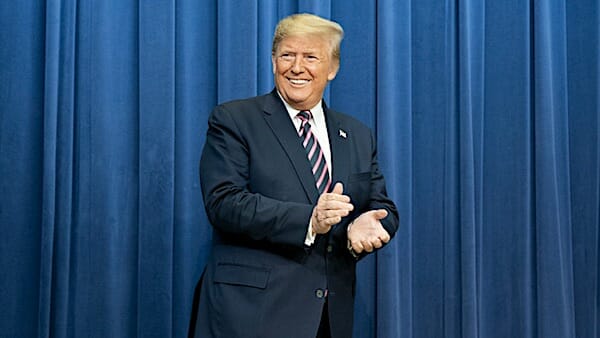 The leaked draft opinion indicating the Supreme Court is prepared to overturn the Roe v. Wade abortion ruling was hailed as a victory for Donald Trump at a gathering at the former president’s Mar-a-Lago property premiering the movie “2000 Mules,” which presents evidence of an alleged ballot trafficking plot that affected the outcome of the 2020 election.

“Is this a post-presidential victory for Trump given the number of justices he has appointed? Of course, it is,” radio host Dennis Prager told Newsweek. “Elections have consequences.”

“Thank God we had a conservative Republican as president for four years,” Prager said. “Very few people knew how serious a conservative he was. I’m not sure even Trump knows how conservative he is. I say that as a compliment. He didn’t think ideologically, he thought with common sense. That, plus courage, makes you a conservative.”

The Mar-a-Lago guests came at the invitation of Trump and Dinesh D’Souza, producer of “2000 Mules.”

D’Souza said in a video interview with WND (embedded below) this week that the investigation featured in the movie will “blow out of the water” the idea that the 2020 vote was the most secure election ever.

“No one who sees this movie will be able to listen to that with a straight face,” he said.

D’Souza emphasized “this is evidence of a completely different caliber than anything we’ve seen before.”

As Engelbrecht told WND in a video interview last week (video below), through a tedious process of combing through two petabytes of data they uncovered a highly coordinated operation in key battleground states carried out by left-wing groups that collected mail-in ballots and paid “mules” to stuff them in unattended drop boxes, typically in the middle of the night.

Last week, Georgia state investigators who responded to a complaint by True the Vote issued subpoenas that signal they are engaged in a wide-ranging probe into the alleged ballot trafficking, Just the News reported.

publication without charge to any eligible news publisher that can provide a large audience. For licensing opportunities of our original content, please contact licensing@wndnewscenter.org.