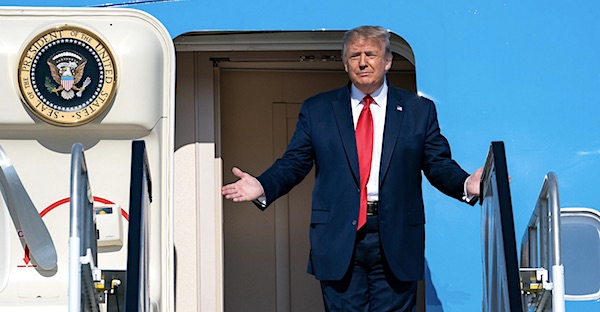 Vandals targeted the home of one of former President Donald Trump’s impeachment lawyers, spray-painting the word “TRAITOR” in red on his driveway in suburban Philadelphia, police said.

The vandalism occurred around 8 p.m. on Friday at attorney Michael van der Veen’s residence in West Whiteland Township, Pennsylvania, about 30 miles southwest of Philadelphia, according to police.

No arrests have been made, Detective Scott Pezick of the West Whiteland Township Police Department told the Associated Press. Pezick said private security has since been hired by the homeowner to protect the residence, and police presence has been beefed up in van der Veen’s neighborhood.

Van der Veen, a personal injury lawyer, spent the week in Washington, D.C., defending Trump at his impeachment trial related to the Jan. 6 attack on the Capitol building. Trump was acquitted by the Senate on Saturday.

“My home was attacked. I’d rather not go into that,” a visibly upset van der Veen said, adding: “My entire family, my business, my law firm are under siege right now.” 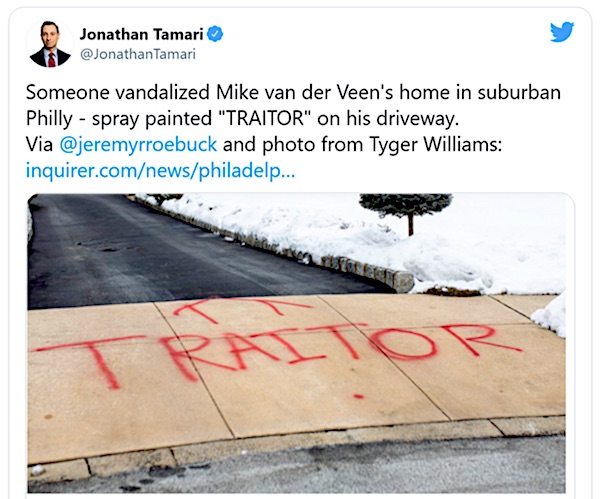 A group of demonstrators gathered over the weekend outside of van der Veen’s law office in downtown Philadelphia, according to the Philadelphia Inquirer. During the protest, demonstrators called van deer Veen a “fascist” and chanted, “When van der Veen lies, what do you do? Convict. Convict,” the newspaper reported.

The vandalism to van der Veen’s home comes about a month after vandals graffitied the homes of Senate Minority Leader Mitch McConnell in Kentucky and House Speaker Nancy Pelosi in San Francisco. In addition to spraying graffiti on Pelosi’s house, vandals left behind a real pig’s head and fake blood.

“My home was attacked last night – windows broken, spray paint, really bad words spray-painted everywhere,” Van der Veen said. “I’m a trial lawyer and I represent people’s interests in court. That’s what I do. I love doing it. And I’m disappointed that that is the result of just me doing my job.”