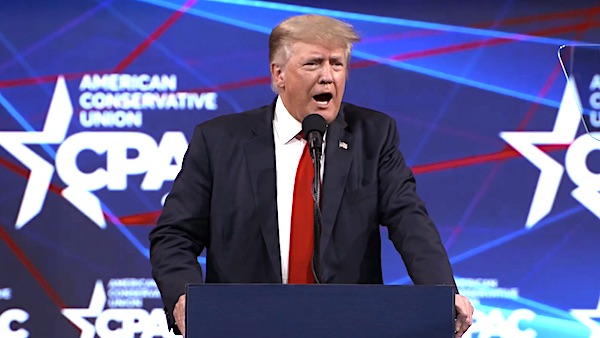 During a passionate speech Sunday in Dallas at CPAC, the Conservative Political Action Conference, former President Donald Trump identified the American he called the “most angry person in the United States” today.

That name is Hillary Clinton, the former U.S. senator and first lady who lost to Trump during the 2016 presidential contest.

Trump suggested Mrs. Clinton was livid because the Democratic Party, Big Tech and the mainstream media teamed up to allegedly steal the election for Joe Biden in 2020, but they did not take similar action for her four years ago.

“Why didn’t you do that for me?” Trump said as he channeled Hillary’s possible thoughts now.

“Why didn’t you cheat for me? I could have been somebody!”

Trump easily won CPAC’s straw poll Sunday for the 2024 GOP presidential nomination, taking 70% of ballots cast, a boost from the 55% he captured during a similar CPAC straw poll in Orlando in February.

Fox News anchor Jon Scott noted, “He stopped short of announcing his own candidacy for the presidency in 2024, but he certainly seemed like a candidate.”

In his 90-minute speech before a packed crowd of some 3,500 people, Trump hammered on familiar themes, saying “Joe Biden has brought our country to the brink of ruin.”

He reiterated claims the 2020 election was stolen, and blasted news agencies and social-media companies for allegedly censoring claims of widespread election fraud.

“You say election fraud, you get canceled,” Trump said.

“Unfortunately this was an election where the person that counts the vote was far more important than the candidate,” he continued. “It’s a disgrace to our nation and we are truly being scorned and disrespected all over the world.”

Trump also suggested the justices on the U.S. Supreme Court are being intimidated by “vicious” Democrats into ruling in favor of the leftist agenda.

“The Democrats are vicious to the Supreme Court and to [Justice Brett] Kavanaugh,” Trump said, concerning threats to impeach Kavanaugh and to pack the court with more justices. “They are playing the ref.”

“I’m very disappointed that Bill Barr was unable to hold anyone accountable for the countless abuses of power by the Democrats,” Trump said.

“He didn’t hold the corrupt officials who spied on our campaign… not the authors of the phony dossier… not the women who slandered and lied and defamed Brett Kavanaugh… not any of the numerous criminal referrals for lying to Congress over and over again, not any of the illegal leakers.”

“I said, ‘Bill you gotta move your a**,’” Trump noted. “He became a different man when Democrats stated they wanted to impeach him.”

“I didn’t become different, I got impeached twice. I became worse.”

“And by the way, where’s Durham, what happened?” Trump wondered aloud, alluding to special counsel John Durham who was charged with probing alleged wrongdoing in the “Russia collusion” probe.

He mentioned impeachment manager, U.S. Rep. Adam Schiff, D-Calif., whom he referred to as “a very dishonest guy,” adding, “shifty Schiff was saying was pure bullsh**.”

Trump also discussed his newly filed class-action lawsuit against Big Tech giants including Google, Facebook and Twitter for their alleged suppression of conservatives.

“They are hard at work to abolish the First Amendment as well,” Trump said.

“The radical left and Big Tech’s attack on free speech is unlawful, it’s unconstitutional and it is completely un-American.”

“To protect the Constitutional rights and liberties of every citizen this week I filed a major class action. A lot of people are joining,” Trump said, as the crowd erupted into a standing ovation.

“With the help of everyone here today, we will defeat the radical left, the socialists, Marxists and the critical race theorists,” Trump said.

“We will secure our borders, we will stop left wing cancel culture, we will restore free speech and free elections and we will make America great again.”