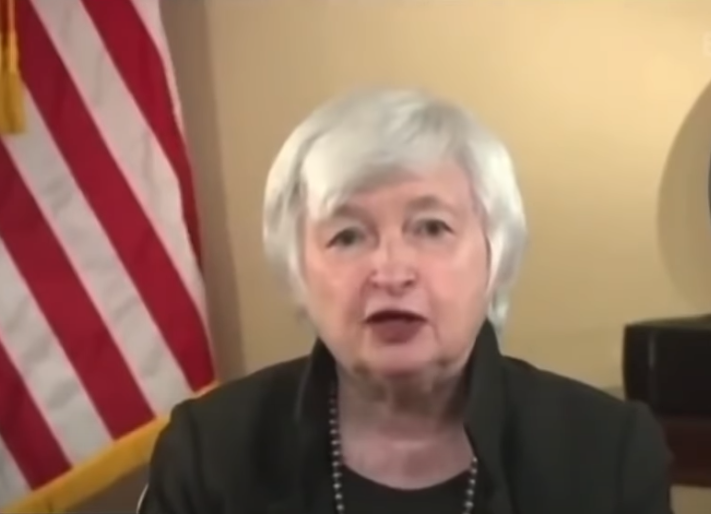 “The corporate income tax is the least efficient tax base, and it makes sense for countries that want to attract investment and improve their standard of living to cut their corporate taxes.”

Biden’s proposal to raise the corporate tax rate to 28% from 21% would push the U.S. from the middle of the pack among major economies to near the top. His plan would also impose a 21% minimum tax on U.S. companies’ foreign income, remove an export incentive and raise taxes on some foreign companies’ U.S. operations.

Edwards said that without international competition, governments are monopolies, and all economists know that monopolies are bad. “Yellen should know that to an extent, tax competition reduces the monopoly power of governments.” Edwards added.

According to a blog Edwards wrote for 1945.com,  the U.S. corporate tax rate is already higher than the global average, and Biden’s plan would make the rate even less competitive.

Using data from KPMG  for 2021, Edwards created a chart which shows the U.S. federal rate is 21 percent and the average state rate is 7.5 percent. Taking into account that state corporate taxes are deducted against the federal tax, the current U.S. federal-state rate is 27 percent. 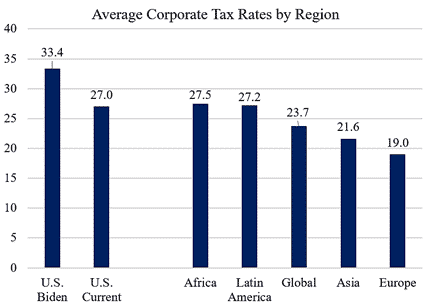 Edwards explained that low corporate tax rates are a tool states and developing countries use to attract investment, spurring economic growth and job creation. He cited the example of Ireland in the 1990s which attracted a lot of international investment and was able to grow its economy with a 12 percent corporate tax rate. He said the Paris-based Organization of Economic Cooperation and Development has pressured Ireland to raise its corporate tax rate for decades to make higher-taxed European countries more competitive but so far, Ireland has resisted.

“Yellen’s proposal is arrogant and bullying from the perspective of less developed countries,” Edwards said. “The corporate income tax is the least efficient tax base, and it makes sense for countries that want to attract investment and improve their standard of living to cut their corporate taxes. Just a few decades ago, Ireland was much poorer than Britain, but its implementation of a low corporate tax rate and other reforms has helped it grow strongly and almost catch up to Britain in living standards.”

“Treasury Secretary Janet Yellen’s attempt to unilaterally create a minimum corporate tax around the world reveals a breathtaking ignorance of the separation of powers in the Constitution. The power of taxation is vested in Congress, according to Article I, Section 8 of the Constitution. What’s more, one Congress cannot bind a future Congress when it comes to setting tax rates. Yellen has neither the power to impose a tax rate, nor the ability to create a long-term deal unless it is within the context of a treaty which must be ratified by a two-thirds majority of the Senate.

“The idea of setting a minimum tax rate for corporations will not stop corporate flight from high tax countries. One would think the treasury secretary would be busy printing money to cover the Biden spend-orama rather than seeking to make deals she doesn’t have the power to make.”

Edwards, author of the book “Global Tax Revolution: The Rise of Tax Competition and the Battle to Defend It,” said the political left is fundamentally opposed to free market competition, domestically or abroad.  “A good example is a minimum wage,” Edwards explained. “The left wants a national minimum wage is because they hate it when companies move their business from states with $15 minimum wages to states with lower minimum wages. They hate Right to Work laws because it makes it harder for states with pro-union laws to compete. Biden wants to eliminate right to work laws completely. He wants to unionize the whole country.”

This post, Treasury Secretary Yellen’s push for a global minimum corporate tax undermines free markets and hurts developing nations, was originally published on The Daily Torch and is republished here with permission. Please support their efforts.