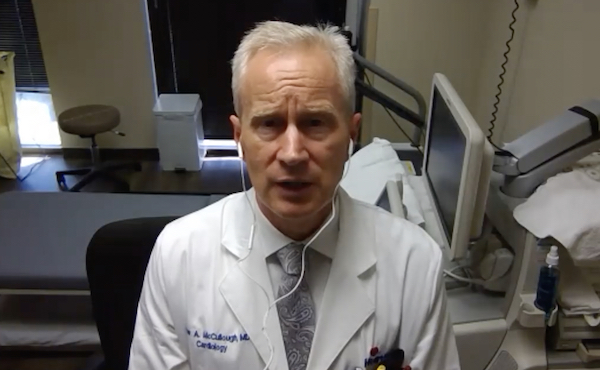 The Wikipedia entry for Dr. Peter McCullough states matter of factly in the second paragraph that the renowned cardiologist and medical scientist with 600 peer-reviewed published papers to his name has “promoted misinformation and falsehoods about COVID-19, the vaccines and treatments.”

President Biden picked up on that charge Tuesday in his introduction of measures against the new omicron variant, centered on more vaccination and exponentially expanded testing. The commander-in-chief undoubtedly was referring to McCullough and a number of the scientist’s colleagues when he charged that the “vaccine hesitancy” of an estimated 40 million Americans has been “fueled by dangerous misinformation on cable TV and social media.”

Biden called on “the purveyors of these lies and misinformation to stop it.” The president described as “immoral” their distribution of data on safe and effective early treatments along with reports of vaccine injuries from the Centers for Disease Control and Prevention website amid suppression of traditional scientific debate.

In a 30-minute video interview with WND on Thursday discussing the government’s response to the omicron wave along with the latest on vaccines and treatments, McCullough was asked how he reacted to Biden’s statement.

McCullough, who said he has been vaccinated for COVID-19, told WND the way forward is to simply “drop all the rhetoric and all the angst regarding the discussion here and just constantly – like we did today – dispassionately review the published data.”

What’s really immoral, he said, is the suppression of treatments that he, many doctors around the world and studies have found to be life-savers, such as ivermectin, hydroxychloroquine and monoclonal antibodies.

“I get calls every day from patients where the treatment has been suppressed,” he said.

In fact, after the interview, McCullough told WND he had received many such messages during the conversation.

“The doctors are denying them treatment for COVID-19, and they’re scrambling to find monoclonal antibodies, and they’re upset that our government is not helping them get these life-saving infusions,” he said.

People also are upset, he said, about the silence on vaccine injuries and the lack of a government treatment program for them.

He said that more than 200 million Americans have responded to the government’s call to get vaccinated, but the CDC’s database records nearly 1 million reports of vaccine injuries, which McCullough previously has estimated could be only one-fifth the true total. Other studies estimate it’s much higher.

“They feel like they have been forgotten about, that they’ve been left behind by their government,” he said.

Many of McCullough’s 600 peer-reviewed publications have appeared in top-tier journals such as the New England Journal of Medicine, Journal of the American Medical Association and The Lancet. He testified to the U.S. Senate in November 2020 against what he described as the federal government’s politicization of health care during the pandemic, curbing or blocking the availability of cheap, effective treatments. In a speech in September, he told of having been stripped of the editorship of a Swiss-based journal after having lost his position with a major health system, “with no explanation and no due process.”

All because of his “lawful” participation “in a topic of public importance.”

He said there are “powerful forces at work, far more powerful than we can possibly think of, that are influencing anybody who is in a position of authority.”

Time to ‘step up’
McCullough has called for a “pivot” from the current policies to early treatment and “compassionate care” for those who have COVID or have been injured by vaccines, which have included myocarditis, neurological issues and blood clotting.

“Now is the time for doctors to step up. Now is not a time for rhetoric or harsh statements regarding scientific discourse,” he said.

McCullough said he and his colleagues are holding public programs that draw from 500 to 5,000 in which people are eager to learn “after being stonewalled on any information regarding early treatment and now on any information on the vaccines.”

“They are simply told to take the vaccines with no analysis of how the vaccines are doing and how they can be administered safely,” he said.

McCullough said that both President Trump and President Biden and the federal government should have supported presenting “monthly comprehensive vaccine reports to the public.”

“Instead, we’ve had nothing.”

Asked where people could find doctors who share his willingness to employ safe and effective early treatments that have been suppressed by the government, McCullough pointed to the website of the Association of American Physicians and Surgeons, which has a roster “about 500 or 600 doctors who are trying to treat the whole country.”

‘Preying upon the vaccinated’
The good news about the omicron variant – which the CDC said this week is 73% of new cases and more than 90% in much of the country – is that the data show hospitalizations and deaths are down significantly, McCullough noted.

The CDC estimates 79% of new cases are people who have been fully vaccinated, he pointed out, observing “it’s almost as if omicron is preying upon the vaccinated.”

“But it’s a very mild syndrome: runny nose, no pulmonary symptoms and some body aches, and individuals get over it.”

What’s clear, he said, is that “the vaccines don’t stop transmission and they pretty clearly have no impact on omicron.”

He advises people gathering for the holidays simply “to be prudent,” staying home if you have symptoms and seeking early treatment if you are over 65 and have underlying medical issues.

Studies show the virus is being spread almost entirely by people with symptoms, not the asymptomatic. And pre-symptomatic spread also is minimal.

Noting the 500 million test kits ordered by the federal government, McCullough said tests should never be done on people with no symptoms, “because it will simply generate false positives.”

He explained that the virus remains in the body for a long time, producing false positives in people who are no longer sick or infectious.

Here’s an easy way to fight COVID-19
McCullough discussed the new Pfizer and Merck oral treatments given emergency use authorization this week by the FDA and the off-label, repurposed drugs he has been administering and advocating.

He said the new drugs will be “welcome into the standard program,” but “the real question is are they better than hydroxychloroquine and ivermectin?”

“I don’t know. There’s been such a good track record with those drugs,” he said. “They’re widely used.”

But the biggest advance in treatment of COVID-19, he said, is an oral nasal treatment that long has been used by doctors to treat viral and bacterial sinusitis.

The lead agent, he said, is sold as Betadine, which is 10% povidone iodine. It can be purchased at a pharmacy or online for about $10.

A small amount of Betadine can be squirted into a shot-glass sized container – enough to cover the bottom – and the rest of the glass can be filled with water.

The solution is administered in the nose with a nasal bulb or spray syringe.

“Squirt it up the nose over the sink. Sniff it back and then spit it out,” McCullough advised. “Do that in both nostrils and then gargle with the rest, spit it out in the sink.

“I tell you, that has a tremendous effect. People should do that after their Christmas dinner, their congregant setting, [after] they’ve been around people.”

He explained that the virus takes three to five days to multiply in the nose.

“So we should actually zap it right there in the nose before it gets a head start,” he said.

A study of the nasal treatment for COVID-19 showed it knocked down the PCR positivity from 303 to less than 30 in a few days, McCullough said, and there were virtually no hospitalizations. This kind of “nasal decontamination” has been done in Bangladesh, he noted, where there is virtually no COVID.

Food-grade hydrogen peroxide would be a “second best” substitute for anyone who doesn’t tolerate Betadine.

“I want every American, instead of focusing on hand sanitizer,” to use the treatment regularly, he said.