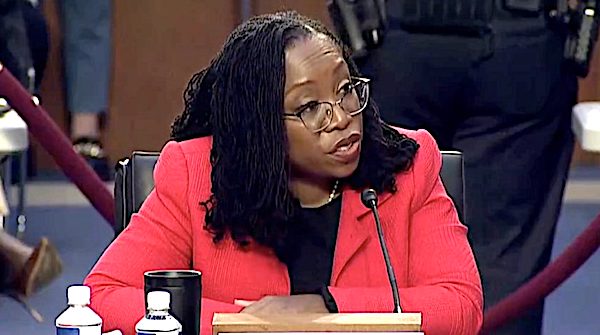 It was just about a year ago that James Dobson, one of America’s most prominent evangelical leaders, warned that Joe Biden’s facilitation of the “radical agenda” of the far left could be the “coup de grâce for America.”

Now Dobson, who has advised five presidents on family and faith issues, says the ascension of Ketanji Jackson to the Supreme Court could do much of that for the rule of law in America.

It a statement to supporters, he said Jackson will bring in a “new form of justice.”

“Sadly, it is one that won’t protect our children,” he said.

He pointed out the 53-47 vote for her was being considered almost exactly along party lines.

And he noted the overarching focus on her skin color and gender, since Joe Biden insisted his nominee be a black woman.

“Here are the facts. The public is usually resistant to judges who are seen as ‘soft on crime,’ but Judge Jackson’s habit of leniency toward child pornography offenders is especially troubling. In all the cases she handled that dealt with these vile offenses, her sentences were below the maximum recommendation, below the minimum recommendation, and below the prosecutors’ requests.

“But somehow that didn’t matter, and this crucial concern was unbelievably mocked or minimized by some. At a moment in history when the innocence of our children is being assaulted like never before, the Biden administration and Senate put someone on the Supreme Court with an unusually bad record of protecting it. Where is America’s indignation over this?”

If only that were the only concern, he noted.

“Ketanji Brown Jackson is equally unqualified to protect the lives of our children. Asked when life begins, she said ‘I don’t know,’ which is a virtual assurance that she will join the radical left in supporting abortion anytime, anywhere, and make sure all Americans have to pay for it despite their religious objections. Mark my word – she will not protect our most vulnerable children,” he wrote.

She also confirmed she be on the “radical left” on gender, since she was unable to define what is a woman.

Her appointment “it should be a stark warning for all Americans who stand for life, truth, and religious freedom,” he said.