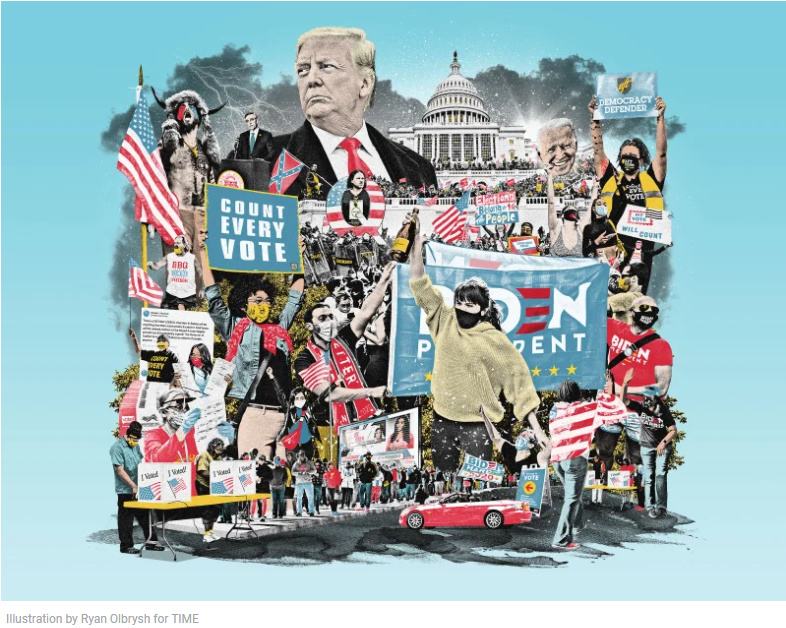 A Time magazine article, ‘The Secret History of the Shadow Campaign That Saved the 2020 Election,’ written by Molly Ball, TIME’s National Political Correspondent, is getting a lot of attention in conservative circles because it seems to make the case that the election was, in fact an insider hit job on President Trump.

There was a conspiracy unfolding behind the scenes, one that both curtailed the protests and coordinated the resistance from CEOs. Both surprises were the result of an informal alliance between left-wing activists and business titans. The pact was formalized in a terse, little-noticed joint statement of the U.S. Chamber of Commerce and AFL-CIO published on Election Day. Both sides would come to see it as a sort of implicit bargain–inspired by the summer’s massive, sometimes destructive racial-justice protests–in which the forces of labor came together with the forces of capital to keep the peace and oppose Trump’s assault on democracy.

The handshake between business and labor was just one component of a vast, cross-partisan campaign to protect the election–an extraordinary shadow effort dedicated not to winning the vote but to ensuring it would be free and fair, credible and uncorrupted.

Some conservatives believe this proves there was  “coordinated voter manipulation to swing votes against President Trump.”  However, at least one conservative political insider says the piece is “needlessly provocative and unsupported” by the facts. For two different takes on the piece, we go the political newcomer Brett Kimball, a guest columnist for the Daily Torch and Dan McGlaughlin, senior writer at the conservative National Review Online. For McGlaughlin’s take on the piece, we pulled from his National Review Online column, Irresponsible Hype from Molly Ball and Time Magazine.

Is the Time piece worth reading?

Kimball: Everyone should read the full article, if only to see firsthand the excruciating details with which Ball describes the efforts, pre and post-election, to secure a Joe Biden victory.

It’s interesting to note Ball’s choice of the word “saved” as used in the title of her article. It’s clear she sees the work of this shadow campaign as unobjectionably good and necessary. But conservatives read Ball’s words as an admission of guilt on the part of the institutions they had already suspected of conspiring against their candidate, and with good reason. She’s just admitted as much. She claims this “well-funded cabal of powerful people” was not attempting to “steal” the election; “they were fortifying it.” But anyone who reads this shockingly brazen, pretentious piece knows exactly what they were “fortifying” against: the possibility of a victory for Donald Trump.

McGlaughlin: [Writer] Molly Ball would like to convince you that, if you’re worried about a conspiracy run by a wealthy, invisible cabal to rig the election against Donald Trump, you’re right. But the facts in her own story don’t entirely support her own breathless rhetoric. Are she and her editors at Time withholding more evidence? Letting overeager sources hang themselves in their headlong rush to burnish their reputations and fundraising lists? Or just being completely reckless and irresponsible in feeding the conspiracy-theory machine for clicks? Ball’s article raises some legitimate concerns, but it is written in a needlessly provocative style. Time’s article is irresponsible hype.

What is your reaction to these particularly provocative sections of the article?

This is the inside story of the conspiracy to save the 2020 election, based on access to the group’s inner workings, never-before-seen documents and interviews with dozens of those involved from across the political spectrum. . . . The participants want the secret history of the 2020 election told, even though it sounds like a paranoid fever dream — a well-funded cabal of powerful people, ranging across industries and ideologies, working together behind the scenes to influence perceptions, change rules and laws, steer media coverage and control the flow of information.

Their work touched every aspect of the election. They got states to change voting systems and laws and helped secure hundreds of millions in public and private funding. They fended off voter-suppression lawsuits, recruited armies of poll workers and got millions of people to vote by mail for the first time. They successfully pressured social media companies to take a harder line against disinformation and used data-driven strategies to fight viral smears.

Kimball: This is a stunning admission. Many on the Left just last month vilified anyone who dared encourage the idea that Trump was right about his claims of conspiracy against him.

The surest example of this group’s secret efforts came when the New York Post released their expose of Hunter Biden just weeks before the election, detailing highly credible accusations of corruption and wrongdoing on the part of the Biden family. Almost immediately the Silicon Valley tech infrastructure united to bury the story and claim “misinformation.” Twitter banned the account of one of the oldest papers in the country’s history while other sites did their part to bury the story as well. Mark Zuckerburg, under pressure from Vanita Gupta, president and CEO of the Leadership Conference on Civil and Human Rights, and other “civil rights activists,” agreed to crack down on content on his site deemed to be “false information.” Gupta, who runs in social and professional circles that include Twitter CEO Jack Dorsey and tech giants, has been nominated for Associate Attorney General by President Biden.

McGlaughlin: There is a lot going on here. In Ball’s framing of the story, a single conspiratorial cabal that started with “the galactic center for a constellation of operatives across the left” united progressive activists, Big Tech, media, state elections officials, lawyers, business, labor, street activists, and a handful of Republicans. They worked to change voting rules to advantage Democrats, and plotted to thwart Republican efforts to challenge the rules they had already changed or the outcomes they had helped create.

Ball mixes and matches together into a single stew the story of efforts to (1) strategize among Democrats to beat Trump, (2) change voting rules to allow more mail-in balloting, (3) convince voters to vote by mail, (4), finance protective equipment for polling places, (5) win preelection lawsuits for Democrats over Republicans, (6) enlist Big Tech leaders such as Jack Dorsey of Twitter and Mark Zuckerberg of Facebook to actively police “disinformation” on their platforms, (7) spread public awareness of the challenges of vote-counting in 2020, (8) promote in-person and mail-in turnout by black voters in particular, (9) control the timing of street protests on the left, and (10) pressure or convince Republican elections officials and state legislators to resist Trump’s post-election schemes. Ball presents this narrative as if it were a single, unified plan directed by the people that she interviewed. We are given no evidence, however, of which people and groups were involved across multiple different tasks, or how coordinated those efforts really were.

Does the writer prove their was a nefarious scheme, or does she just explain how insider politics works?

Kimball: It was total hit job on Trump. Ball admits that Trump was right to question the quick push to declare Joe Biden president.  According to Ball, the “architect” of this secret alliance to “protect” the election, was a man named Mike Podhorzer. As senior adviser to the president of the AFL-CIO, Podhorzer has “marshaled the latest tactics and data to help its favored candidates win elections…  [for nearly a] quarter century.” If that isn’t concerning enough, she goes on to describe how Podhorzer created a group ironically titled the “Democracy Defense Coalition,” whose first goal was “overhauling America’s balky election infrastructure.” This group of leftist activists from various institutions and ideologies worked hard to implement the messy and unsecure voting practices which raised concerns for millions after the election.

Many had expressed concern over new voting procedures allowing for an unprecedented amount of mail in votes which historically offer a high probability of potential fraud. Coupled with new rules allowing for ballot harvesting on a scale never seen before, and with the encouragement to vote by mail coming from all corners of the leftist institutional spectrum, there certainly seemed a case to be made for fears of potential malfeasance in the process of distributing and counting those largely unverifiable ballots. Those making claims such as those were quickly dismissed, but it seems they had good reason to suspect there was something larger at play.

McGlaughlin: The reaction to this story among those on the right has been precisely what anyone familiar with American politics would have predicted. The most egregious example of the story’s slanted, partisan framing is its efforts to have progressives take credit for the actions of Michigan House speaker Lee Chatfield, Michigan Senate majority leader Mike Shirkey, Detroit canvasser Aaron Van Langevelde, and Georgia secretary of state Brad Raffensperger, all Republicans who did their jobs under pressure from Trump to undo the results of the election. The article spins hypothetical theories about what Trump could offer these people, and tries to portray its progressive heroes as important to their decisions. But no evidence whatsoever is presented to show that any of the groups in the article had any influence on Republican decisions to act honorably — decisions that, unlike those of the Democrats quoted throughout this article, were not simply a matter of advancing their own partisan self-interest.

What is your biggest takeaway from the article?

Kimball: Trump and his supporters were right to question the unprecedented voting procedures being implemented in the lead-up to the election in various key states. They were also right in questioning the motives of those who pushed so feverishly to accept the initial results of the election just one day after. This came after the Left claimed for months that it may take weeks to fully count the votes and that any premature declaration of victory on Trump’s part would be nothing short of a “threat to democracy.”

McGlaughlin: Ball and her editors had to know, with absolute certainty, that this is how her article would be received. So why write it that way? When you look closely, there is less than meets the eye in some places, and more than a few reasons to think that her sources are puffing up their own roles in order to advance their own standing in the progressive world as master operators and saviors of democracy. And there are many unanswered questions, some that cast doubt on her premises, others that should justifiably raise conservative eyebrows.

Ball has typically been a diligent reporter, and there are things in this article worth knowing and exploring. But she really should have been much more careful about throwing around terms like “conspiracy” and “cabal,” and asked harder questions about what her sources were really up to.

This post, TIME: ‘Shadow Campaign Saved 2020 Election.’ Is that true?, was originally published on The Daily Torch and is republished here with permission. Please support their efforts.