'This is not North Korea!' Aussies revolt over vicious COVID crackdown 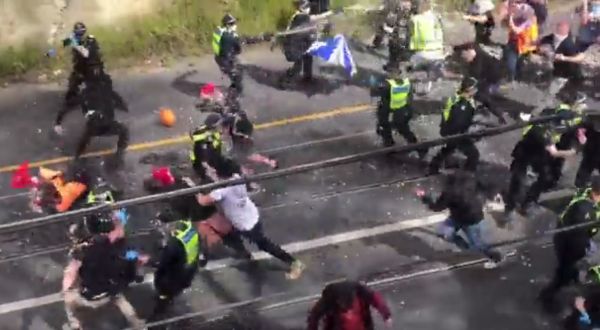 Citizens in Australia’s largest cities have taken to the streets in protest of strict coronavirus lockdowns and mandatory vaccination for workers, with police Wednesday in Melbourne firing rubber bullets, stinger grenades and pepper balls on the third day of violent demonstrations.

Residents of Melbourne have been under a strict lockdown for 230 days that includes a 9 p.m. curfew. Police arrested 215 protesters throughout the day, and two officers suffered head injuries.

“I’ve grown up here my entire life in Australia, I can’t believe that I’m seeing this in my state as well,” said Australian journalist Rukshan Fernando in an interview with Fox News’ Laura Ingraham.

Ingraham said that for a moment, she thought she was seeing scenes from China. In only months, she said, Australia “has gone from one of the world’s freest countries to what is essentially a bio-medical police state.”

“China’s looking very rapaciously at Australia but it looked more like something at Tiananmen Square than you’d expect from Australia,” Ingraham said on her program Tuesday night.

Many Australians have posted videos on social media to document the strict enforcement of the country’s COVID policies.

One shows a police officer at a transportation station in Melbourne running from behind a man and slamming him violently to the floor.

In New South Wales, a mother, with a small child, who apparently was staging a peaceful protest on a sidewalk, is seen being hauled way by police as her child cries.

listen to this mother’s screaming little child as police arrest her, merely for appearing to stand alone with her little boy on the street.

Where is the HONOUR?

Police in Melbourne on Wednesday are seen in the two videos below firing rubber bullets at protesters. The second shows police firing at the backs of people running away:

Aussie police shooting construction workers with rubber bullets at a war memorial “for their health”, I hope this awakens the rest of Australia to stand alongside the workers, this tyranny can’t go on! #Communism @DaveAtherton20 @dannyroscoe7 pic.twitter.com/r7pd9hQU7P

This is so robocop creepy pic.twitter.com/r49cRb1pZZ

Demonstrators in Melbourne on Wednesday chanted “lest we forget” as they stood in front of a World War II monument.

RISES against vaccine mandates, streets are overrun by protestors.

Police appeared to have RETREATED#RESISTpic.twitter.com/YpsQJi0YoA

On Tuesday, some 2,000 tradesmen and anti-vaccination and freedom campaigners demonstrated against a two-week shutdown of the construction industry imposed due to rising COVID cases.

Thousands of trade workers and other protesters fill the streets in Melbourne, Australia as anger boils over after Premier Dan Andrews shut down construction sites across Melbourne to punish workers pushing back against vaccine mandates.pic.twitter.com/mUan2L2Z0B

One demonstrator videoed his exchange with a police officer who said he sympathized with the protests but was just doing his job.

“We’re getting paid to do this. I’m just as over this protest as you are — by protest I mean lockdown —but unfortunately, I gotta do what I gotta do. I’m not skilled to do anything else,” the officer said.

“We’re getting paid to do this. I’m just as over this protest as you are—by protest I mean lockdown—but unfortunately, I gotta do what I gotta do. I’m not skilled to do anything else.”

Don’t be fooled by the tough gear. This is what cowardice looks like.pic.twitter.com/ZOHBUS6WuM

Melbourne protesters on Saturday chanted to police officers “Shame on you!”

Scenes from a freedom rally in Australia — Police uses capsicum spray to subdue protesters at an anti-lockdown protest in Melbourne. pic.twitter.com/62LFa7zKS4

If you thought you were going to die from COVID, you wouldn’t protest like this.

Rather, Australians think they are going to die at the hands of an authoritarian government.pic.twitter.com/gJWuJXyPNO

A tradesman took his life at a building site in Melbourne hours after the government announced a shutdown of construction sites as punishment for vaccine hesitancy among workers.

Last November, Australia boasted that its “zero COVID” policy based on “faith in science” had “almost eliminated” COVID-19. But since them, cases have risen more than 19,000%.

Well I checked on Australia again to see if the endless lockdowns & police enforced beach mask wearing had brought cases back down yet, but nope, not yet

We’re up to a 19,511% increase since the Washington Post said they’d “almost eliminated” COVID with faith in science

Earlier this month, a satricial montage of the many COVID pronouncements of the premier of the state of New South Wales, Gladys Berejiklian, was posted on Twitter.

Last week, Reuters reported New South Wales and Victoria, which comprise more than half of Australia’s 25 million people, are testing facial recognition software that enables police check whether or not people are home during COVID-19 quarantine.

Who made this masterpiece!!? pic.twitter.com/chNe2eZTXm

Meanwhile, in Canada this week, thousands of doctors and other medical professionals held a silent protest against vaccine mandates.