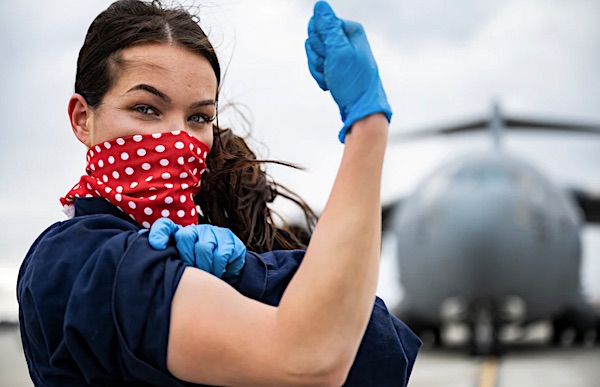 Just one year later, in 2021, tens of thousands of those same “frontline heroes” are now branded as rebels, conspiracy theorists, extremists – and yes, potential terrorists, at least according to the Department of Homeland Security. Considered so dangerous as to merit termination, their professional and personal lives turned upside down due to their decision not to be injected with the experimental COVID vaccines, they are forbidden from working in their field of hard-won expertise and forced to take any job they can get – or go on unemployment. Many are compelled to sell their homes, relocate their families entirely and try to start over. This is happening in massive numbers, right now, all over America.

From hero to untouchable – what a difference a year makes. A year in which America has been ruled by a corrupt, dishonest and cognitively disintegrating puppet of a president totally subservient to secret handlers and even-more-secret anti-American agendas.

But healthcare heroes being disposed of en masse is just the beginning.

The same fate is being imposed on America’s police, its firemen, its border patrol agents and other key protectors and defenders of civilized society; its airline pilots, air-traffic controllers, plane mechanics and others essential to America’s transportation and distribution systems; plus all federal government employees, multitudes of teachers and college students, and all employees of private companies employing more than 100 people – all ordered by Joe Biden to “get vaccinated” or else. Then there are the forced vaccinations for the entire Armed Forces of the United States, populated largely by young people at an age and fitness level that render serious COVID-19 outcomes extremely rare. Indeed, as of Oct. 8, only 62 out of 1.4 million members of America’s military – approximately 0.004% – had died of COVID.

In reality, what the Biden administration has put into motion resembles a galactic game of “Chicken” between the “government-medical complex” and tens of millions of Americans who simply choose not to be vaccinated. It’s a harrowing, death-defying contest to see which will happen first: Either millions give in and allow their bodies to be injected with the controversial experimental medicines, or the entire nation loses perhaps a quarter of its most essential workers who are forbidden from working, causing the nation to grind to a halt – crippling everything from law enforcement to airlines to commercial supply chains, even hospitals. The shutdowns are already happening – from an obstetric hospital wing in New York to a neonatal intensive care unit in Maine to nursing homes announcing their imminent closure. And much more is sure to come, as many mandate deadlines haven’t even been reached yet.

The good news is that tens of millions of Americans realize all of this and are now fighting back – bravely and boldly. Many are not waiting to be fired and are instead resigning in protest – from nurses to police to pilots. Demonstrations by yesterday’s “frontline heroes” are breaking out everywhere, with participants carrying signs saying, “I call my own shots,” “No forced vaccines,” “My body, my choice” and “Yesterday’s heroes, today’s unemployed.”

The whole epic showdown between freedom-loving Americans and the power-mad elites intent on implementing their tyrannical, authoritarian agendas is laid out as never before in the sensational October issue of WND’s monthly Whistleblower magazine, titled “THE GREAT AMERICAN REBELLION: ‘We will not comply!’ COVID-19 power grab ignites bold new era of national defiance.” 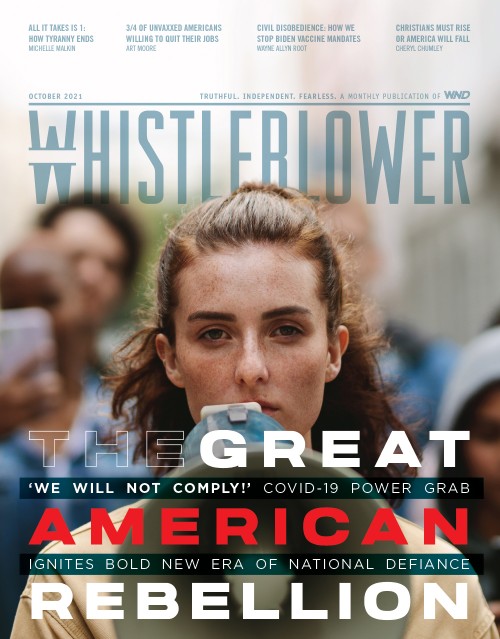 Of course, in response to the pushback, the Biden administration is doing what it always does to its political and ideological opponents: It brands them as terrorists.

Indeed, a “national terrorism alert” released by Biden’s Department of Homeland Security in September, shortly before the 20th anniversary of the 9-11 terror attacks, is titled “POTENTIAL TERROR THREATS.”

DHS specifies three terror threats as particularly worrisome to the Biden administration, and the top one is: “OPPOSITION TO COVID MEASURES.”

Meanwhile, as the whole vaccine mandate drama is wracking the nation, yet another front in the Biden administration’s new “war on terror” has emerged: Parents, upset that their own children, who face virtually no threat from COVID-19, are forced to wear masks all day while being brainwashed with “critical race theory,” transgenderism and other toxic and corrupting ideologies, are fighting back. At school board meetings across the country, courageous mothers and fathers are defending their children and excoriating school board members for promoting Marxist poison in the schools the parents are forced to pay for.

Attorney General Merrick Garland recently weaponized the Department of Justice against America’s parents when he issued a memo characterizing those speaking up at school board meetings as extremists and potential terrorists, directing the FBI to work with each U.S. Attorney’s office and federal, state and local leaders to convene meetings addressing “threats against school administrators, board members, teachers, and staff.”

Just as the Biden administration characterizes those who cried foul after the fraud-plagued November 2020 election as insurrectionists and terrorists, it has now enlarged the “violent extremist” dragnet to include nurses, pilots, teachers and Navy SEALs who choose not to receive the experimental COVID vaccines, as well as parents protesting schools traumatizing and brainwashing their kids.

This is the first time an American government has turned against its own people, essentially branding them as public enemy No. 1.

This unique issue of Whistleblower chronicles how decent, patriotic and God-fearing Americans are courageously standing up, speaking out, and nonviolently fighting back – hard – for their livelihoods, for their families, and for the country they love.

Highlights of “THE GREAT AMERICAN REBELLION” include:

* “Just say NO” by David Kupelian

* “The Great American Rebellion: ‘We will not comply!’ COVID-19 power grab ignites new era of national defiance” by Chelsea Haggard

* “All it takes is 1: This is how tyranny ends – inspiring stories of Americans standing up to vaccine mandates” by Michelle Malkin

* “3/4 of unvaxxed Americans would quit their job rather than receive the mRNA vaccine: Washington Post/ABC survey documents ever-growing nationwide ‘resistance’” by Art Moore

* “Comply or Die: Vax-partheid in the operating room. Patients in life-and-death crises now denied care due to their vaccination status” by Michelle Malkin

* “Christians must rise or America will fall: ‘It’s the churchgoers and believers and followers of Christ who must take up reins and fight’” by Cheryl Chumley

* “What kind of country are we, really? ‘Are we willing to watch the continued attack on America’s most fundamental principles?’” by Laura Hollis

“This extraordinary issue of Whistleblower,” says author and journalist David Kupelian, Whistleblower’s longtime editor, “is not primarily a compilation of articles written by pundits safely ensconced behind their computers and podcasting microphones, exhorting others to do this or do that to save the nation. Rather, these are the inspiring stories of the actual real Americans who are putting everything on the line and courageously standing up and effectively opposing the deranged people, policies and ideologies that are destroying the greatest nation on earth.”

SPECIAL OFFER: For a limited time, subscribe to Whistleblower, renew or give a gift subscription and you’ll get $10 off the already discounted rate (pay only $39.95 instead of the usual $49.95), plus you’ll get FOUR very special free gifts!

First, you’ll get the coveted print edition of one of Whistleblower’s most popular issues ever, “YES, THE 2020 ELECTION WAS STOLEN: How Big Tech, Big Media, lying Democrats, deep staters and vote fraudsters cheated Trump – and America.” From rampant voter fraud, to Google inducing 6 million “undecided” voters to support Joe Biden, to social media and news organizations and the “deep state” working together to suppress damning revelations about Biden family corruption just before the election, to the Democrat-Media Complex’s underlying message that election fraud is not just morally permissible, but morally essential, because “Trump is another Hitler,” this special issue of Whistleblower presents a powerful and groundbreaking case that the November 2020 presidential election was the most corrupt in generations.

Next, you’ll get the digital version of Whistleblower’s shocking insider report on how public school children across the nation are now being radicalized through being indoctrinated with the same Marxist poison that has long plagued America’s universities, all under cover of “anti-racism training.” Millions of children are literally being taught to hate their own country, feel guilty for crimes they didn’t commit, and abandon the values that made America the greatest, most prosperous and least racist nation in history. For a powerful insider look at the appalling brainwashing of America’s children in today’s public school classrooms, read “BRAINWASHING AMERICA’S NEXT GENERATION.”

You’ll also receive the digital version of one of the most devastatingly powerful journalistic takedowns of the abortion industry ever, Whistleblower’s epic “STOP KILLING BABIES” issue. For decades the abortion war has raged, each side winning and losing battles in the courts and legislatures. Yet the net result – despite Americans’ consistent and overwhelming opposition to unfettered abortion-on-demand – has been the slaughter of more than 60 million American children, a number equal to almost one-fifth of the current U.S. population. However, the abortion war is building to a climax, and this special issue of Whistleblower peers into the future to predict the ultimate outcome.

Finally, you’ll get the digital version of one Whistleblower’s most popular and important – and potentially even life-saving – issues ever, “ENDING THE PANDEMIC: How vaccine mania and lust for power led to the all-out suppression of proven safe-and-effective COVID treatments.” Americans are discovering that much of what they thought they knew about the COVID-19 pandemic has been a lie. At the same time, the reality of safe, effective, inexpensive and readily available medications that can both treat and prevent COVID infection – successfully used all over the world – has been ruthlessly suppressed at every turn. But the truth is finally emerging, and is explored in-depth – including a comprehensive, up-to-date resource list – in “ENDING THE PANDEMIC.”

This special quadruple free offer will end without notice.

GIVE A GIFT WHISTLEBLOWER SUBSCRIPTION

PLEASE NOTE: When your Whistleblower subscription is due to expire, you will receive a renewal notice from us. To keep Whistleblower coming, do nothing and we’ll renew your subscription automatically for the special low price of only $39.95 by charging your credit or debit card. There’s never any risk, as you may cancel at any time for a full refund of the unused portion of your subscription.

If you prefer, you may order a single copy of the October 2021 issue, “THE GREAT AMERICAN REBELLION.” Or GET THE DIGITAL VERSION HERE!