Study shows there were 8,700 George Floyd 'events' costing up to $2 billion 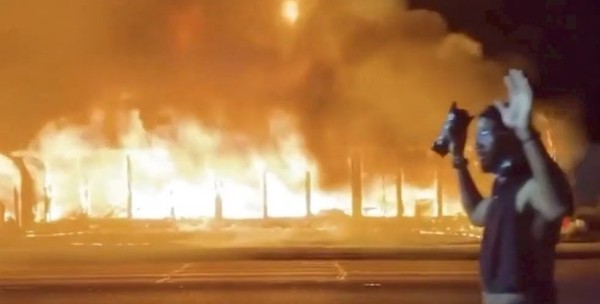 Real Clear Investigations has released a report that documents the wide disparity between the Jan. 6 riot at the U.S. Capitol, which Democrats have insisted was an attempt to overthrow the U.S. government, and the months-long string of riots stemming from the death of George Floyd in 2020.

The Capitol event was because among the tens of thousands attending a rally for President Trump, there were a few hundred to went to the Capitol and broke doors and windows and generally did other vandalism.

The George Floyd riots happened over the course of 2020 as activist groups used the tragic death of the Minneapolis man, at the hands of police, to try to “defund” police across the nation, impose radical new race programs, such as Joe Biden’s plan to forgive debts of minority farmers but not those of white farmers, and such.

The Real Clear report, and an accompanying database, show the stunning differences in impact on America.

The federal government has claimed that the Washington riot was “domestic terrorism,” yet it still classifies the George Floyd riots as “riots.”

In Washington, dozens of suspects have been held, sometimes in solidarity, for months, and nonviolent offenders without criminal records have been behind bars ever since their arrests. In the George Floyd cases, some 90% of citations and charges were dropped, dismissed or not even filed, including many felony cases.

“Many in the political and media establishment have cast the Jan. 6 riot at the U.S. Capitol as one of the darkest episodes in American history, comparing an episode in which one person was slain (a protester shot by police) to 9/11, Pearl Harbor, the Civil War, and the British sacking of the capital city in 1814. Seizing on the gravity of a mob trying to interfere with the process of recording Electoral College votes after a presidential election, Democrats impeached Donald Trump over the Jan. 6 breach and put him on trial in the Senate. Democrats have also spearheaded a congressional investigation – one focused on the former president – that will likely stretch into next election season,” Real Clear reported.

Actually, the Democrat campaign against President Trump was the second attempt to impeach him and remove him from office. Both failed.

“Republicans, Trump supporters, and others see a double standard at play in Democrats’ emphasis on Jan. 6. They note that many Democrats cheered nationwide protests and some even put up bail after the May 2020 murder of George Floyd, a black man, by a white police officer — prolonged unrest that generated far more death and destruction. They argue that groups associated with the summer’s violence, such as Black Lives Matter and Antifa, themselves aim to subvert democracy, and acted accordingly in targeting cops, public offices, and private businesses,” Real Clear explained.

The report noted polling shows a majority of Americans like the idea of examining both events.

The analysis also looks at the “all-but-forgotten” riot in Washington on Inauguration Day in 2017.

Real Clear said it found “the summer 2020 riots resulted in some 15 times more injured police officers, 30 times as many arrests, and estimated damages in dollar terms up to 1,300 times more costly than those of the Capitol riot. George Floyd rioters were found to have used more sophisticated and dangerous tactics than did the Capitol rioters, and in some cases weapons of greater lethality.”

It also concluded, “Authorities have pursued the largely Trump-supporting Capitol rioters with substantially more vigor than suspected wrongdoers in the earlier two cases. Many accused Capitol rioters, unlike accused participants in the other riots, have been held in pretrial detention for months – with one defendant serving more time than the maximum sentence for the charge to which he pleaded guilty. Some allegedly endured solitary confinement and other mistreatment.”

Unlike the Capitol case, the defendants on George Floyd riot cases many times have seen criminal charges, dropped, dismissed, or ignored by prosecutors to start.

California Voters Get What They Deserve