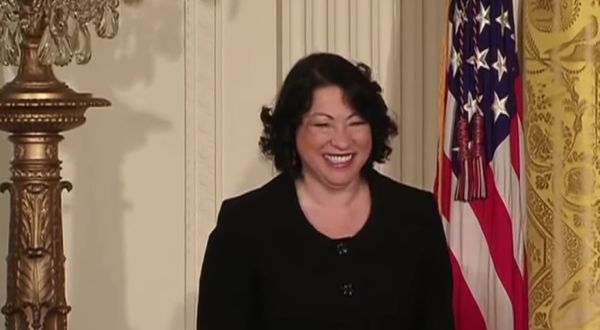 Sonia Sotomayor, a Barack Obama appointee to the Supreme Court and one of its most dedicated leftist ideologues, is “undermining” the integrity of the court by speaking out on pending issues – and then encouraging other activists to go out and change the law.

The criticism of Sotomayor comes from constitutional expert Jonathan Turley, a law professor at George Washington University and legal commentator online and on TV networks.

The situation is that, according to the Hill, on the issue of a dispute over a Texas abortion law that currently is pending before the court, she told an audience “You know, I can’t change Texas’s law. But you can, and everyone else who may or may not like it can go out there and by lobbying forces in changing laws that you don’t like.”

The high court recently decided 5-4 to let the state law take effect. It’s viewed as a significant restriction on abortion and pro-abortion campaigners and advocates were outraged at the decision.

Sotomayor vigorously dissented from that conclusion.

Turley explained his concerns that a sitting justice was lobbying on behalf of one side regarding an issue pending before the court.

“Modern justices have longed chafed at the restraints of judicial ethical rules about public commentary. The late Ruth Bader Ginsburg was celebrated as ‘notorious’ due in part to her controversial public speeches and discussions of pending or expected cases before the court,” he wrote. “Despite my long criticism of this trend, I was still taken aback by comments of Justice Sonia Sotomayor at an event organized by the American Bar Association. In her comments, Sotomayor appeared to call for political campaigns and discussed a matter just before the court.”

He said surprising was not only Sotomayor’s lobbying on behalf of one side of the issue, but the lack of reaction from “liberal activists” who have been denouncing the court as being “too political,” mainly because it for now has a conservative majority.

“I admittedly hold a more traditional and cloistered view of public role of justices,” he explained.

But now, he said, “We have seen more and more public speaking by justices in both books and speeches on contemporary issues. I have called this trend the ‘rise of the celebrity justice.’ However, what occurred this week was troubling. Justice Sotomayor participated in the event with law students by Zoom. Sotomayor first told the law students to expect a ‘huge amount’ of disappointment in the law and pointed to ‘my dissents’ as evidence of that struggle.”

He explained, “Sotomayor then turned to the recent court decision not to intervene in the Texas abortion case. Sotomayor wrote a heated dissent in Whole Woman Health v. Jackson. After criticizing her colleagues for their ‘stunning’ decision, she called on students to politically oppose the law.”

He noted her acknowledgement about ethics concerns.

She said, “I am pointing out to that when I shouldn’t because they tell me I shouldn’t. But my point is that there are going to be a lot of things you don’t like.”

Turley said, “It was plainly obvious that Justice Sotomayor was encouraging students to politically oppose the law and laws like it.”

He went on, “Now that Sotomayor has called for political action and lobbying against the law, there may be calls for her to recuse herself though she is unlikely to do so. What is most striking is how Sotomayor’s words has received praise and virtually no criticism from the left. Professors and writers have been calling for the packing of the court due to what they describe as a politically active majority on the right of the court. Here is a justice calling directly for political action to change a law being appealed to the Supreme Court. Yet, there is not a peep of protest from figures like Dean Erwin Chemerinsky that the conservatives on the court are a bunch of ‘political hacks’.”

He said, “This type of commentary undermines the integrity of the court in dealing with opinions with tremendous impact on all citizens. They have a right to expect justices to speak through their opinions and refrain from such public political remarks, particularly on matters before or coming to the court.”