Senator: Troops and wall at Capitol are message to 'dangerous' Trump voters 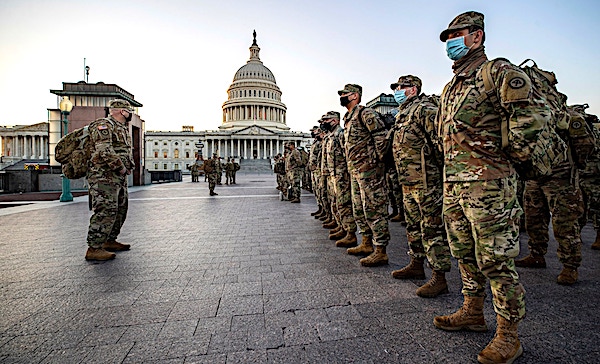 The barriers, National Guard troops and heightened police presence at the U.S. Capitol is meant to “send a signal” that Trump supporters are “dangerous” and “insurrectionists,” according to a prominent Republican senator.

“I think the fencing is remaining in place to send a signal — a narrative that 74 million voters who voted for President Trump are dangerous to our democracy, they’re all insurrectionists, and that’s simply not the case,” said Sen. Ron Johnson, R-Wis., in an interview with Maria Bartiromo on the Fox News Channel’s “Sunday Morning Futures.”

About 5,000 National Guard troops, along with a high fence with razor wire, remain one month after the storming of the Capitol.

Johnson, the ranking member of the Senate Homeland Security and Governmental Affairs Committee, said it’s still unknown exactly what happened on Jan. 6 and who was responsible.

“And yet, we have these eight-foot-tall fences with concertina wire completely surrounding the Capitol,” he said.

“Obviously, leaders in Congress think walls and barriers work because they’ve surrounded the Capitol with them,” said Johnson, referring to Democrats’ opposition to the southern border wall.

The Wisconsin Republican said that senators have been told that the heightened security will be in place until at least March.

“Listen, the Capitol is the people’s house. It shouldn’t be barricaded unless there’re some real threats that I’m not aware of that they are not telling us about,” he said.

“I think we ought to take that fencing down and return to as normal position as possible.”