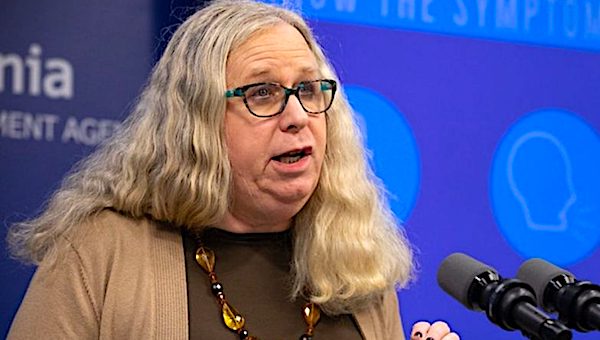 At a confirmation hearing Thursday, Sen. Rand Paul, R-Ky., confronted President Biden’s nominee for assistant secretary of Health and Human Services on the government’s support for “sex-change” treatment and surgery.

The exchange was particularly significant because the nominee is Dr. Rachel Levine, who would become the first transgender U.S. official if confirmed.

Paul wanted to know whether or not the government should overrule the authority of parents and support children undergoing hormone treatment and “surgical destruction” of their genitalia.

“Dr. Levine, do you believe that minors are capable of making such a life-changing decision as changing one’s sex?” Paul asked.

Paul pressed further, asking, “Do you support the government intervening to override a parent’s consent to give a child puberty blockers, cross-sex hormones, and/or amputation surgery of breasts or genitalia?”

Levine dodged again, repeating the previous answer while welcoming a discussion about the issue with Paul and his staff if confirmed.

“Let it go to the record that the witness refused to answer the question,” Paul said.

The senator said most children who suffer gender dysphoria eventually become “comfortable” with their birth sex without drastic intervention.

Many studies support his claim, finding that up to 94% of children with gender dysphoria eventually “grow out of it” and do not identify as transgender.

Paul cited the case of Keira Bell, who sued the British government after undergoing “sex reassignment” procedures as a teen.

A British woman who “detransitioned” in 2018 sparked controversy by claiming that hundreds of people who had gender reassignment contacted her and expressed regret, wishing to return to their original sex.

Government health facilities in the U.K. have offered guidance on gender transition to children as young as 3 or 4 years old, and participation in transition programs has skyrocketed.

At the hearing Thursday, Democratic Sen. Patty Murray of Washington, the chairman of the Health, Education Labor and Pensions Committee, rebuked Paul, accusing him of making “harmful misrepresentations” after describing transition surgery as “genital mutilation.”

Murray told Levine: “I appreciated your thoughtful and medically-informed response to Sen. Paul’s questions earlier in the hearing. It is really critical to me that our nominees be treated with respect and that our questions focus on their qualifications and the work ahead of us rather than on ideological and harmful misrepresentations like those we heard from Sen. Paul earlier and I will focus on that as chair of this committee.”

The mother of a transgender daughter asked him how he would protect LBTQ rights if he were elected.

Biden vowed to eliminate Trump’s “transgender orders” and said there should be no “discrimination” against children who “want to be transgender.”

“The idea that an 8-year-old child or a 10-year-old child decides, you know, I decided I want to be transgender. That’s what I think I’d like to be. It’d make my life a lot easier. There should be zero discrimination,” Biden said.

Biden has issued an “Executive Order on Preventing and Combating Discrimination on the Basis of Gender Identity or Sexual Orientation,” which calls for a broader application of the 2020 U.S. Supreme Court ruling in Bostock v. Clayton County, which mandated that LGBTQ people are protected from sex discrimination in the workplace.

This week, the Biden administration withdrew the government’s support for a Trump administration lawsuit in Connecticut that seeks to ban males who identify as females from participating in girls’ high school sports.

Connecticut allows high school athletes to compete in sports according to their gender identity.