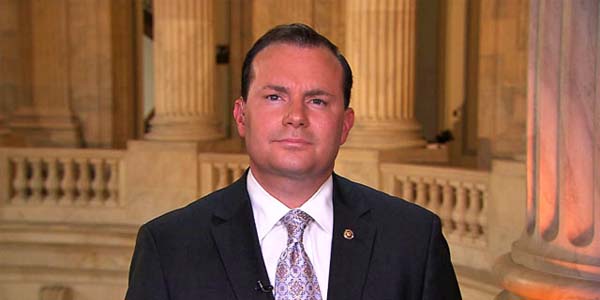 Democrats presenting their second impeachment case against President Trump have been forced by Sen. Mike Lee, R-Utah, to revise their evidence because it was false.

“They are contrary to fact,” Lee said of comments that came from Rep. David Cicilline, D-R.I.

Cicilline, as part of the Democrats new impeachment case, claimed that “Lee said former President Donald Trump was trying to convince Sen. Tommy Tuberville, R-Ala., to delay the certification of the presidential on Jan. 6 as a pro-Trump mob stormed the Capitol,” according to Fox.

The facts are that Lee confirmed Trump called him asking for Tuberville and that he handed his phone to Tuberville. But Lee has not said what the conversation between Trump and Tuberville was about.

“Sen. Lee objected and asked that the false statements be stricken from the record. The House managers agreed to withdraw those statements.”

Lee explained he is the only witness, and “Those statements are not true … were not made by me and they’re not accurate.”

A Vermont Democrat, Sen. Patrick Leahy, who already has voted, in a procedure dispute, against President Trump, is presiding over the partisan Senate proceedings that are based on California Democrat Rep. Nancy Pelosi’s “snap impeachment” in which she accused Trump of inciting insurrection and allowed a short time of testimony, without witnesses or evidence, before demanding a House vote.

That was even less that her failed impeach-and-remove agenda of a year ago, when Trump was easily acquitted of all charges in the Senate.

Leahy had tried to reject Lee’s request for a correction as not being consistent with the Senate rules, but Lee then appealed.

Rep. Jamie Raskin, D-Md., claimed Cicilline correctly read from a newspaper account even though he admitted “it is not true” so the comments would be withdrawn.

Neguse claimed that Turley’s opinion about the validity of retroactive trials for people who already have left office was recent.

Turley called him out.

“Neguse cited my Duke piece at length to support the basis for retroactive trials after saying that I supported such trials until the last few weeks,” Turley wrote online.

“I felt Neguse did an excellent job in his argument but that statement is simply not true,” Turley continued. He explained he does recognize “the value” of such trials, but “his characterization of my position … was misleading.”

“Indeed, if my views of 21 years ago are going to be cited as recent, I would at least appreciate the use of my thinner photos from the 1990s,” he joked.

Turley noted that another legal analyst, Laurence Tribe, also “bizarrely” claimed that “not long ago” he, Turley, argued in favor of retroactive trials, based on that same Duke Law Journal article from 21 years ago.

Turley explained his views have evolved.

“If I were to write the Duke piece today, I would still maintain that it shows how impeachment trials serve this dialogic role but that, of the three outlying cases, I agreed with the decision in Blount (and the view of roughly half of the Senate in Belknap) that such trials are extraconstitutional.

“It was historically allowed but I believe that it is not constitutionally sound. That view against retroactive impeachments is strengthened by what we have witnessed in the two Trump impeachments,” he explained.