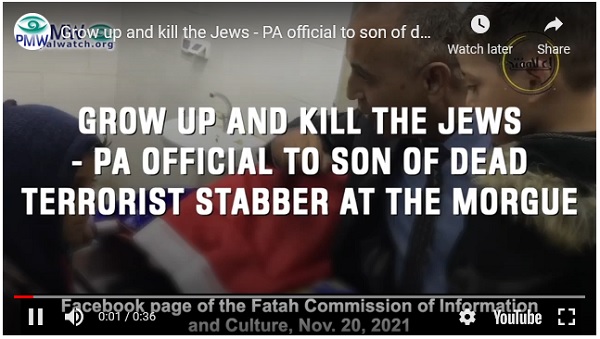 A Palestinian official has told the young son of a woman terrorist who launched a stabbing attack on security officers in Jerusalem’s Old City recently, and died during the attack, that he must grow up and kill Jews.

The instructions were delivered by Jenin District Deputy Gov. Kamal Abu Al-Rub to the son of female Palestinian terrorist Israa Khzaimiah, 30, who died during her attack on officers on Sept. 30.

The Fatah Movement posted a video of the PA official “comforting one of the terrorists’ young sons, encouraging him that when he grows up he will kill ‘Jews’ – to whom he assigned collective responsibility – because they ‘killed her,’” according to a report from Palestinian Media Watch.

The official and the son were standing in the morgue next to the flag-draped body of the attacker at the time.

Abu Al-Rub said, to the son, “Say, ‘May Allah have mercy on her.’ Allah willing, we’ll pray together in Jerusalem. And the Jews, who killed her, Allah willing, the moment we grow up we’ll kill them.”

On Facebook was the statement, “Report: A segment from the farewell to female Mart_yr Israa Khzaimiah (i.e., terrorist stabber) in Qabatiya, in the southern Jenin [district].”

PMW reported the underscore mark in “Martyr” “is an attempt to evade Facebook’s algorithm to remove pro-terror content.”

Fatah used International Children’s Day to spread the image, the report said, showing the young boy next to his mother’s body, but “without mentioning her terror attack.”

The organization noted it has “exposed the PA’s education of Palestinian kids to embrace violence and terror as valid means in the ‘struggle’ against Israelis and Jews, to see Martyrdom-death for ‘Palestine’ as an ideal, and to envision a future when Israel is destroyed.”

Most recently, PMW documented terror promoting messages to young children, such as “the liberation of Palestine will only be achieved through armed struggle,” in Fatah’s magazine Waed for children ages 6-15.