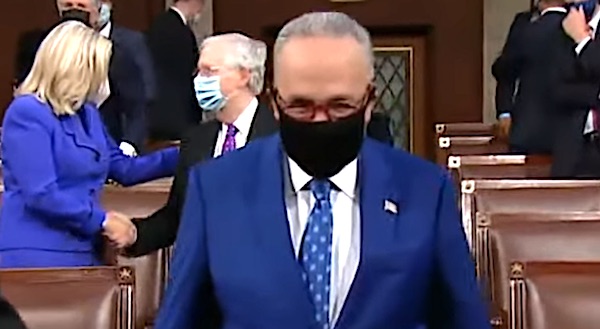 A statement from the office of Senate Majority Leader Chuck Schumer says his decision to call people “retarded” was “inappropriate.”

Schumer, a Democrat, applied that label to disabled children, according to the Washington Examiner.

It came during an interview on a podcast called OneNYCHA.

“One of the hosts, Saundrea Coleman, mentioned a new initiative in New York intending to shelter homeless people even though there are some opponents to the plan, which prompted Schumer to discuss his experiences,” the report said.

On the @OneNycha podcast, @SenSchumer refers to mentally disabled children as “retarded.” pic.twitter.com/4cwrs8wMFW

Schumer said, about those who are skeptics of the proposed project, “I have found that my whole career. I wanted to build, when I first was an assemblyman, they wanted to build a congregant living place for retarded children, and the whole neighborhood was against it.”

“For decades, Sen. Schumer has been an ardent champion for enlightened policy and full funding of services for people with intellectual and developmental disabilities,” an office spokesman told the foundation.

“He used an inappropriate and outdated word in his description of an effort he supported that was led by the AHRC to build a group home in his Brooklyn district decades ago to provide housing and services to children with developmental disabilities,” the spokesman continued. “He is sincerely sorry for his use of the outdated and hurtful language.”

The AHRC stood at the time for the Association for the Help of Retarded Children. That group said on its website it no longer uses such wording.

The foundation report explained, “The word ‘retarded’ has been used for many years to describe someone who is intellectually slow or has Down Syndrome, and is considered by many to be a ‘hurtful’ and offensive term.”

The Spread the Word Inclusion website explains that actor John C. McGinley of “Scrubs” believes calling people the “R-word,” or “retarded, “is wrong.”

“When you pepper your speak with ‘retard’ and ‘retarded,’ you are spreading hate,” he said.

Further, Karleigh Jones, a New Zealand athlete at the Special Olympics, explained, “The word retard is considered hate speech because it offends people with intellectual and developmental disabilities as well as the people that care for and support them.”

Schumer has been working on a reputation for some pretty outlandish comments. A year ago he threatened Supreme Court Justices Neil Gorsuch and Brett Kavanaugh publicly.

He was addressing the court’s precedents on abortion.