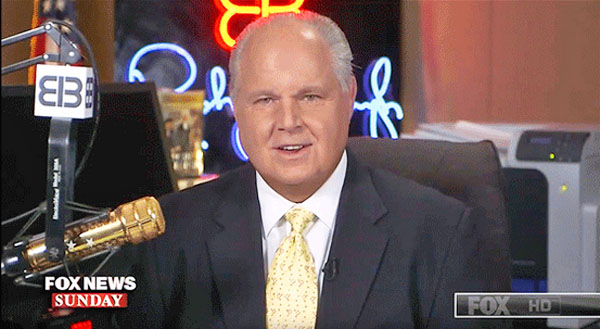 Rush Limbaugh was remembered Wednesday as an “indispensable” leader of the conservative movement, a “happy warrior” who singlehandedly resurrected AM radio as he explained America and its reason for existence in a way no one else could, shaping a generation of political and cultural thought along with countless individual lives.

His wife, Kathryn Adams Limbaugh, announced on his radio show his death Wednesday morning at the age of 70 at his home in Palm Beach, Florida.

Trump said Limbaugh was a “legend,” and for those who listened to him every day “it was like a religious experience.”

Former President George W. Bush remembered Limbaugh as an “indomitable spirit with a big heart” who was “a friend throughout my presidency.”

Mark Steyn, who became Limbaugh’s top guest host in recent years, described him as “a giant of American broadcasting, a uniquely talented performer, and a hugely generous man to whom I owe almost everything.”

Steyn titled his tribute “The Indispensable Man,” noting he’s “well aware of the ironies of the headline.”

“My father liked to caution me with the old saw that the graveyard is full of indispensable men,” Steyn wrote. “But, as the conventional bias of the legacy media yielded to something far more severe from the woke billionaires of Social Media, Rush remained the Big Voice on the Right, the largest obstacle to the complete marginalization of conservative ideas in our culture. All those of us who labored in his shadows owe it to him to continue the fight.”

Steyn captured the magnitude of Limbaugh’s unprecedented accomplishments and influence this way: His show held the No. 1 position for three decades, amounting to one-third of the history of commercial radio.

“And throughout all those decades Rush and his show stayed exactly the same: a forensic breakdown of the day’s news, punctuated by musical parodies, satirical sketches, and Rush’s own optimism and good humor, even through this last terrible year,” he said.

“There is no one else remotely like him,” he said. “Look for two things today: the left will react on Twitter and elsewhere with their usual lack of grace which you should ignore as best you can, and second, Tucker Carlson will now be the principal focus of the left’s demonization and paranoia. Oh, wait — that’s already happening.”

Tucker Carlson, for his part, said in a Fox News live interview that Limbaugh’s death leaves a political void.

The Fox News evening host recalled the “shock” when Limbaugh’s show came on the air in Washington, coming out of nowhere to mobilize “disaffected voters” and become “the force” that enabled Republicans to retake Congress in 1994.

Carlson said there’s a void because the Republican Party doesn’t have people in office who can explain what it means to be a conservative.

“People sought him out to help them clarify their own thought,” Carlson said of Limbaugh, noting the GOP is a party of “ideas” while the Democratic Party is a coalition of interest groups.

Carlson found it “honorable and impressive” that Limbaugh admitted his addiction failure in public, making him a more sympathetic, deeper person later in his life.

And there was probably no one who did more to elect Donald Trump than Rush Limbaugh, Carlson said. When the Wall Street Journal opposed Trump during the 2016 primaries because of his stance on trade, Limbaugh assured conservatives that “this man is on our side.” At a time when many conservatives backed Sen. Ted Cruz, Limbaugh said, no, it’s Trump.

“He loved this country like nobody I’d ever met before. [He was] an incredibly wise man, a very smart man, and a dear person. If he thought somebody needed help, he would help them. Nothing like what the liberal media has tried to do to him,” Levin told Fox News anchor Harris Faulkner.

Levin said he wanted Limbaugh to be remembered as “a tremendous patriot of this country.”

“I cant ever thank you enough Rush for giving me life changing opportunities,” he wrote on Twitter. “I’d probably be working in a grocery store if it weren’t for you. I love you forever brother, we will meet again.”

Mike Pompeo: “Rush Limbaugh made conservatism popular with the entire nation and revolutionized conservative media. He will be missed by all of his ‘ditto heads,’ this one included. Our country has lost one of its most important voices. Sending prayers to the Limbaugh family.”

Mollie Hemingway: “Love you, Rush! The greatest radio man in history. An absolute master of the craft. And a brilliant hero to many. If you didn’t listen to him, or only heard him in selectively edited snippets from the hostile media, you won’t understand.”

Brit Hume: “RIP. More than any single person, Rush Limbaugh helped break the left’s monopoly in the media. The left is still dominant, but not to the extent it was before he came along. He waged a brave struggle against deafness and later, the cancer that killed him. He was a giant.”

Eric Metaxes: “Rush really knew exactly where he was going after his life here was over, mostly thanks to his brother @DavidLimbaugh. That matters more than anything. Jesus defeated Death & opens His arms to all of us to be w/Him forever in glory, where life is FAR more real than it is here.”

Dinesh D’Souza: “Rush was quite simply ‘the greatest,’ the Muhammad Ali of radio, incomparably good at what he did, and he put his genius in service of the great cause of liberty.”

M. Zuhdi Jasser: “There will never be any doubt in history that #RushLimbaugh changed the world, trailblazing conservative talk media and especially an alternative media from the “liberal establishment”. The impact he had on many of us in our early years of conservatism in 90’s was profound.”

Sen. Ted Cruz: “Rest in peace to the tireless voice for freedom and the conservative movement Rush Limbaugh. I’m praying for the entire Limbaugh family.”

Sen. Rand Paul: “RIP to a legend and a patriot, Rush Limbaugh. Not many people can say they revolutionized and stayed at the top of an industry the way he did. My condolences to his family.”

Dave Rubin: “Sorry to hear of the passing of Rush Limbaugh. A man who I once disagreed with on almost everything, who, over time, I began to agree with on most everything. But politics aside, a true pioneer in communication and media.”

Ben Williamson: “Once read: solo radio is a job everyone thinks they could do but very few can. It’s you, a live mic, and nowhere to hide. Even beyond his political influence was how masterfully Rush did that job and built that industry, 3 hours every day for 30 years. RIP to a legend.”

Andrew C. McCarthy: “Rush Limbaugh was a warm, wonderful man. I was privileged to call him my friend. Rush is and will remain an iconic, irreplaceable figure in the conservative movement. He was a great American patriot … and, as he would be the first to tell you in his inimitable way, his life was a uniquely American story.”

Jason Chaffetz: “Saddened to hear of the passing of Rush Limbaugh. He was the heart of the conservative movement, an icon who helped light the path for so many of us. God Bless!!”

Vince Coglianese: “Rush Limbaugh was about the only guaranteed thing on radio, no matter where you were in America. I remember long car trips, traveling hundreds of miles while Rush was on air. Whenever the signal faded, scan for a moment, and another station would be there carrying his voice.”

Jay Sekulow: “Rush was a once in a generation broadcaster that changed the landscape of broadcasting across America. He pioneered conservative talk radio. He was a friend of the ACLJ and supported our efforts. He will be greatly missed.”